4 Years Ago Today: Phish Gave Merriweather A Night To Remember 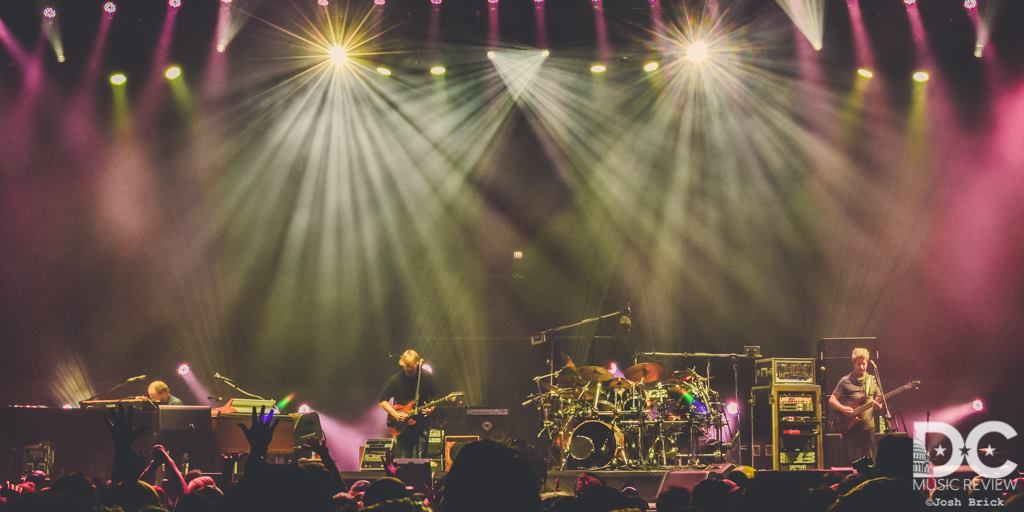 Never miss a Sunday show. Four years ago on this day, Phish closed out their two-night run at Merriweather Post Pavilion with a standout performance, affectionately referred to as the Tweezerfest of 2014 (I prefer Back on the Tweezer, if only because Tweezerfest was already used as the name for a 1994 show, but also because I find it more fitting). Unique for the phish 3.0 era, the show hearkened to a playfulness more familiar to Phish 1.0 shows.

The first set felt more like a traditional second set, closing with a powerful 20 minute "You Enjoy Myself (YEM") and leaving phans wondering what in the world was in store for set two. After a quick "Wilson," "Tweezer" made its first appearance of the night. That would hardly be the last. They jumped back-and-forth between "Tweezer" and "Back on the Train" a couple of times, then descended into a seguefest that featured "Tweezer" after or in between roughly half the set, each time with a growing thunder of applause.  The average song length of set two was just over six minutes, with three songs clocking in at under a minute, but they managed to work in a handful of impressive jams along the way and treated the crowd to a few special bustouts. This show may not have the highest regular rotation value, but the enjoyment and enthusiasm of the crowd that night was as palpable as it gets and cemented Merriweather Post Pavilion  in Phish history.

Phish returns to Merriweather in just a few weeks, on August 11 and August 12. The Saturday night is sold out but tickets are still available for the Sunday show and we already covered what they say about Sunday shows. You can relive the entire Back on the Tweezer show at LivePhish.com.

This show was webcast via LivePhish. YEM included Flash Light teases and featured Trey waving his megaphone and using its siren. The first Tweezer contained Back on the Train teasing from Fish. The third Tweezer included Page teasing Manteca. Catapult was played for the first time since August 14, 2009 (206 shows). DWD was unfinished. NICU contained Under Pressure teases. Tweezer was teased after the first HYHU and in I Been Around. Jennifer Dances was performed at Trey's request for the first time since December 17, 1999 (352 shows), featured Fish attempting to sing the song but not knowing the lyrics, and was quoted at the end of the second HYHU. I Been Around was last played October 16, 2010 (149 shows) and while the band was walking off the stage in synchronized steps.