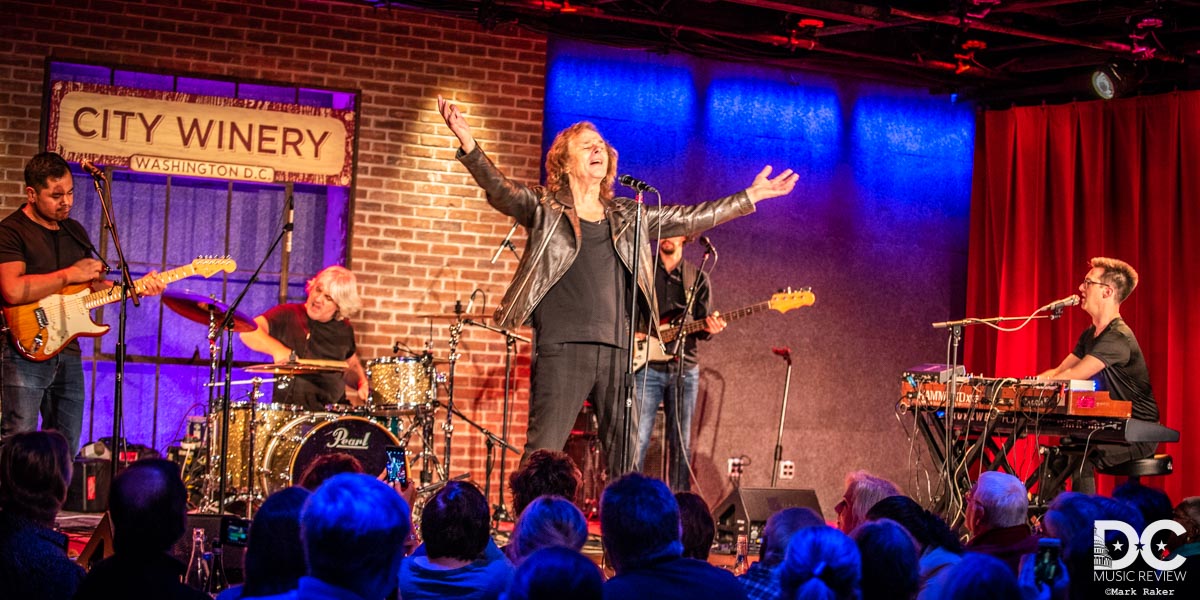 On Thursday February 7, Colin Blunstone performed one of his rare solo band concerts at the City Winery in Washington, DC.  Blunstone, the lead singer for the Zombies, has performed nearly 1000 concerts since he first wrote and recorded the Zombies first hit, "She’s Not There" in 1964. The full audience was made up of mostly fans of Colin and the Zombies, and before the show there was a VIP meet and greet. Much to the crowd’s delight, Blunstone opened with “Broken Hearted” and after playing “Wild Places”, Colin shared a few confessions with everyone. He said that they had been watching from backstage during the opening set and it looked like everyone was already having a great time - he wished that they could have joined them out in the audience. He also asked the crowd to be kind, as they have been traveling and half the band had colds. Colin warned the audience that the end of the next song had such a high note that no man should every try it, especially with a cold. After the comments they played such a good version of “I Don’t Believe in Miracles”, and hit that high note so well that everyone knew that it would be a special evening.

Every few songs, Blunstone chatted with the audience, sharing stories about life on the road and returning home after long tours. About half of the songs the band played were hits in one country or another and though he seemed to apologize that some of the were not US chart hits, the fan filled audience knew all of the songs well. The band played a mix of faster and slower songs and drew the crowd in. When he played a cover of “Tracks of My Tears,” he asked the crowd to sing out and leave their inhibitions at the door. He joked that he doesn’t always remember all the words but is good at lip reading. Everyone sang and had fun. Before playing “Single Man's Dilemma,” Blunstone reminisced that it is a young man's drinking song which brings back wonderful memories. He admitted that he was known to have throw back a couple of beers, sometimes too many. Blunstone no longer drinks alcohol and he exercises his voice every day. Even with a cold his trademark falsetto was able to hit the high notes throughout the evening. “Time of the Season” was another song that got the crowd on their feet. This was the first of several standing ovations during the evening.  The Zombies will be inducted into the Rock and Roll Hall of Fame on March 29, fifty years after “Time of the Season” shot to the top of the singles charts in the United States.

The set ended with the first song that Blunstone ever wrote, “She’s Not There,” which got another standing ovation. The encore, “Just Out of Reach” left the audience excitedly talking about the show once the lights came up.

Getting to see a legend like Blunstone in the intimate surroundings of the City Winery was an unforgettable experience.

Clarence Bucaro opened the evening as a solo act with the title song from his 2018 album, Passionate Kind.  The song had been named one of the 10 "Songs of the Week," by Rolling Stone. He also shared stories between songs about his life and his career. He talked about moving to NY, where the apartment room reminded him of his time in LA listening to a Curtis Mayfield album which inspired his song “Curtis Mayfield.” He also played “Quiet Man,” a song he insisted is not about his father but is about a fictitious man who had a lot on his mind and heart and can’t quite talk about it. On the lighter side he played “Old Brown Shoes” a song about the first shoes he bought after moving out of his parents house and kept for a long time. Bucaro ended his set with “Old Friend.” In addition to Colin Blunstone; Bucaro has shared the stage with well known musicians as The Blind Boys of Alabama, Mavis Staples, Rodney Crowell, Aaron Neville, Tony Joe White, Los Lobos, Richard Thompson and Marc Cohn. It appeared that most of the audience hadn’t seen Bucaro before, though after that set he clearly had a number of new fans.