Bypassing The Male Patriarchy: An Interview With Adeline 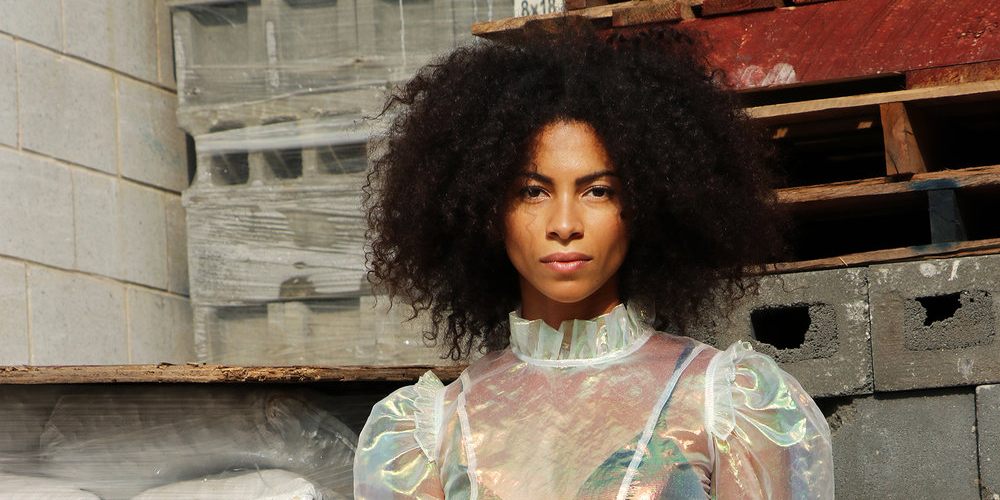 We dare you not to start shimmying when you hear the opening lines of "Before", the standout hit from Adeline's debut album. Typically seen fronting the nu-disco band Escort, the French-Caribbean tour-de-force is bringing her funk-inspired solo endeavor to Union Stage next Sunday, February 24.

We chatted with the artist prior to her first D.C. gig to get the scoop on going solo, how she stays healthy on the road, and bypassing the male patriarchy.

I found it intriguing that you include the phonetic pronunciation of your name not only on your debut album but across your social media platforms. As someone whose name is constantly mispronounced myself (my full name is Anastassia), I’m curious as to if there’s a backstory to this choice?

My name is mispronounced most of the time when I meet people for the first time in the U.S. Because it's an "i", I get called "Ade- line" a lot. That one letter "i" makes a huge difference. It sounds like a completely different name, and I always refused to adapt. I guess it's a way to hold on to my French identity and culture but also to affirm myself as an artist.

Releasing my first solo album gave me an opportunity to establish my identity, and it was either finding a way to convey the right pronunciation or changing my name altogether! It was clearly too late for the latter, so thanks to a few brainstorming sessions with close friends, we found the solution of inserting [ad-uh-leen] everywhere. And the fun thing is that it starts a conversation!

What inspired you to branch out and explore creating music as a solo artist? Have there been any advantages to this choice?

I had been thinking about it for a long time and was making music on my own discretely for a while. It took a combination of a few life events, room in my schedule, having some money saved, and more importantly numerous very important conversations with myself about getting rid of fear to pivot. It was just obvious that the time was right. On the other spectrum, what has been a challenge of the solo project that you didn’t expect?

I was surprised to notice that there were less challenges than I had anticipated. The ability to create music by fully tuning in with myself and following my instincts was incredibly liberating and rewarding.

The difficult part was finding the right team to help me handle the business aspect of it. There are so many pieces to the puzzle and one cannot do it alone. I was so excited after the music was accomplished and for a second I thought that most of the work was done, but I quickly realized that things were only beginning there.

I freaked out for a short time and then had no choice but get myself together because the music had to come out. I had to humble myself down and reach out to people to ask for help. Every time I shared the music with someone it was so hard to hit send. I heard lots of NO's, the toughest was when I got no answers at all.

On Bypassing The Male Patriarchy

Your music video for “Swirl” is incredibly captivating and ethereal; I know that you made a conscious effort to keep it female-led—in an industry where many of the gatekeepers and tastemakers are male, what challenges have you faced?

Thank you! Very glad you liked it. First I'd like to say that it wasn't difficult to find an all female crew for this video (well mostly female, and the two men were assistants!).

I feel like it's important to make that distinction because I see so many people use the excuse that there aren't many female directors and that's why they don't hire women...I didn't face any challenges in making this video because 1) the whole video creation process was so smooth, collaborative and harmonious 2) because I'm an independent artist I am my own boss.

My PR company, Girlie Action, who promoted the video is a female-run business and the video premiered with Refinery 29 which is also a female-driven publication. So once again, we see that when women collaborate, they lift each other up and can bypass the male patriarchy to make beautiful things happen in their professional field.

Touring can be taxing on both the body and mind, with the constant travel and late nights. How do you take care of yourself to ensure that you stay healthy?

I sleep as much as I can whenever I can. That means missing the party most of the time, but we can't have it all. The only thing that preserves the voice is sleep. I can drink all the tea and honey I want, if I slept two hours my voice is going to feel it.

I also drink a lot of water. My bandmates always joke that I leave the venues with packs of water in my bags. Eating healthy and exercising is so important, but it's so tough of the road.

For work out, I do mostly calisthenics which is so useful on the road because I don't need a gym to exercise.