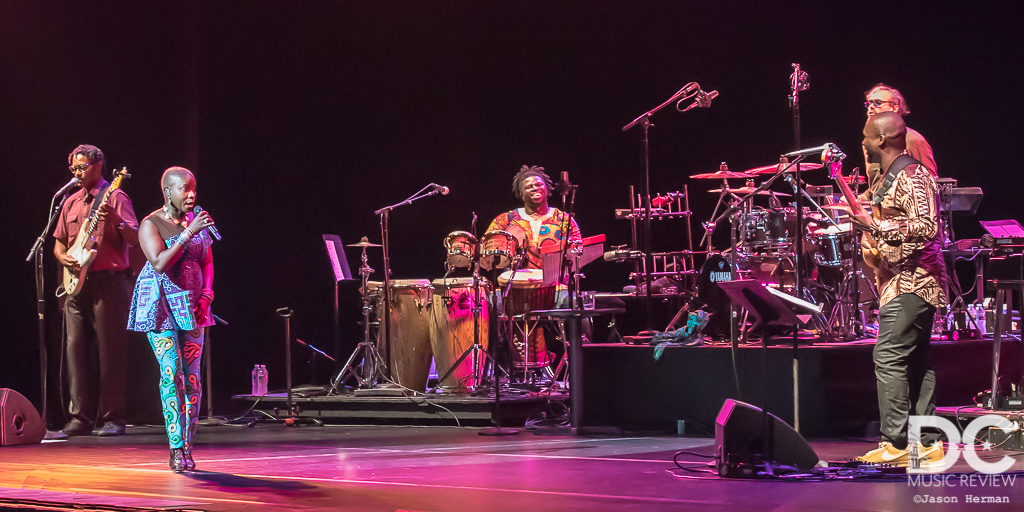 There are many things I’ve heard go well together, but have yet to try – melon with salt, peanut butter and marshmallow fluff – but Afrobeat and Talking Heads?  Well this was one I wasn’t going to have to see for myself!  Tuesday night, August 7th, Wolf Trap welcomed Angelique Kidjo, three-time Grammy award winner and ‘one of the greatest artists in international music today’.  Also with her was opener Femi Kuti and the Positive Force and the name is no understatement.  Both artists brought messages of positivity along with an urgency for change on how we treat each other and mother Earth.  The crowd gathered on a summer night which Kidjo said made her feel right at home with the heat and humidity, reminding her of her homeland Africa.

Kuti took the stage first with an energetic horns section and vibrantly dressed dancers that doubled as backup singers.  With the feel of a church revival, sound somewhat of a New Orleans brass band, and Kuti showing off his incredible breath control and lung capacity on the saxophone, there was no way you were getting out of this without being thoroughly impressed and moved.  While oftentimes taking role of conductor as well as self-proclaimed pilot on ‘Afrobeat Airways’, Kuti promised the audience he would ‘land you safely’ but to please be sure to also fasten your seatbelts.

Femi’s latest album One People, One World is truly something that should be on the prescription pad for every American feeling the hopelessness as they watch the news and tragedy of the world today.  Stopping countless times to talk to the audience and tell them that the problems of the world are indeed our problems as well, and singing lyrics that don’t let you forget that point, he inspired many in the audience to shout in agreement as he deemed it our duty to teach the next generation to do better. Kuti kept his energy high and message strong throughout the performance as he shared tracks old and new that surely made people stop and think about the political climate as well as celebrate the night together.  The dancers never stopped moving despite a quite sticky night and Kuti never let his enthusiasm dwindle.

After a short intermission, Angelique Kidjo took the stage beautifully dressed and supported by a strong band with a variety of drums.  She too spoke of the importance to treat each other and Mother Earth better through lyrics and between songs emphasizing that this is all we have and we must do better.  After shedding her jacket and head, wrap she moved across the stage with the footwork of James Brown often times and her energy never quit.  Learning from her time as a goodwill ambassador, she emphasized the fact that ‘the complacency and silence is killing us’.

“In Africa, when you hear the drum, you get up on your feet and move!” “In Africa, when you hear the drum, you get up on your feet and move!” was a warning and a suggestion that everyone in the audience heeded.  Kidjo remained incredibly connected to her audience and during her feel good, encouraging hit, Mama Africa, soul trained her way off the stage and through the entirety of the pavilion as everyone clapped and sang along.  Hugging and shaking hands with dozens of fans, Angelique also seemed to invoke a feeling of wanting and needing to restore the good things that have recently turned sour.  Able to keep the crowd on their feet for much of the show projecting a strength onstage that was quite admirable and motherly, it was as if her words and message were going to make everything alright just because she said so.   Wanting even more interaction with her audience, Kidjo asked for 20 people to join her onstage and share a dance break.   Literally jumping at the opportunity, ​the stage was soon flooded with​ eager participants wearing smiles and many with beautifully bright dashikis, kaftans and headties​.  The combination of colorful clothing and range of young, old, black, brown, white, skilled dancers and people with no rhythm, looked beautiful onstage as Angelique brought one after another front and center to dance with her.  Those who remained in the audience clapped and smiled along realizing that she had succeed in her mission to bring people together with music and carry on Femi's wish of one people, one world.

Towards the end of the show, as you heard, “And you may find yourself, living in a shotgun shack.  And you may find yourself, in another part of the world” the words “Once in a Lifetime” evolved into something that was more a motto than a title of the Talking Heads hit.  We need to do better, we need to take care of each other, we need to be kind and care about the problems of the world and most importantly, when you hear that two things go well together, give them a try – you might be surprised!

Femi Kuti and the Positive Force