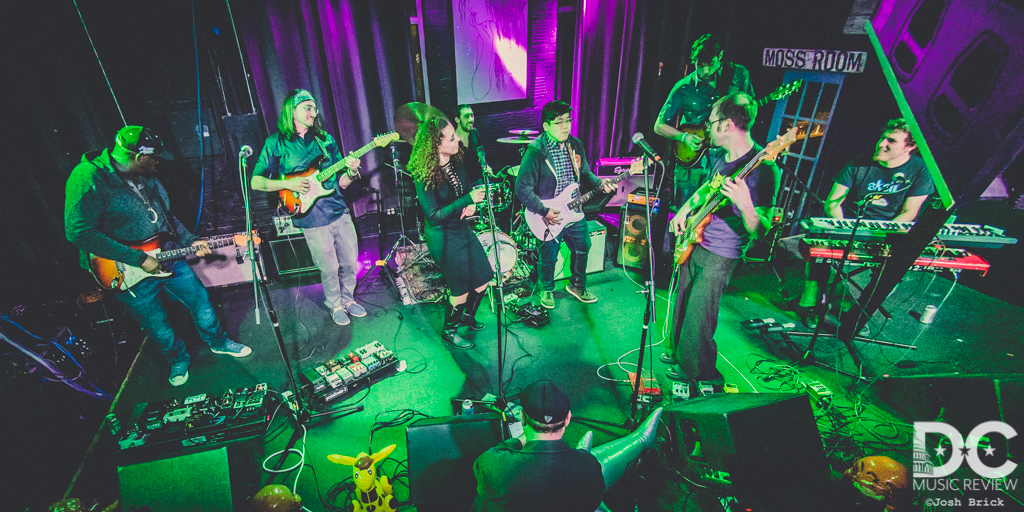 The band had a few surprises in store for the energetic crowd and welcomed several DC heavy-hitters as special guests for several songs. First the band welcomed Chris Lee, a local and highly-renowned guitar player who plays in several projects including Moogatu, Black Masala and DAB Band. Lee joined Albino Rhino for a take on Billy Cobham's "Red Baron," that featured some impressive guitar interplay between he and Blum. The band hit a serious groove that continued with "Milestones" by Miles Davis. The crowd got their money's worth on those two songs alone, but there was more fun in store. Up next was a dual sit-in by vocalist Mary Lankford (Mary-el Band, John K, Sol Roots) and guitarist extraordinaire, Garrett Gleason, as the band slowed things down for a take on Cannonball Adderley's "Mercy, Mercy, Mercy." Gleason remained on stage for Jaco Pastorius' "The Chicken" and the funk was in full force. Smiles filled the room and it was clear the band was enjoying their Gypsy Sally's headlining debut. The jams continued as the band welcomed back Mary-el and DC stalwart – guitarist, vocalist, bandleader Gordon Sterling –for a rousing rendition of J.J. Cale's "After Midnight" that including some extended jamming that had everyone dancing. Gleason and Lee returned to the stage as the entire outfit joined forces for the classic, Robert Johnson's "Sweet Home Chicago."

The crowd wanted more and the band accepted – closing with  another original, "Floor Funk," before taking a well-deserved bow. Albino Rhino is certainly a band to watch going forward – be sure to catch their impressive live show and experience their contagiously good vibes!