An Interview with Melody Walker of Front Country 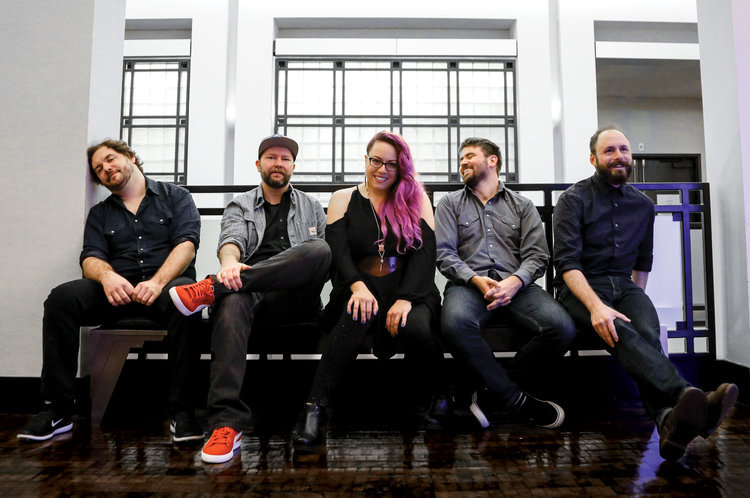 Karin McLaughlin: Melody Walker was nice enough to call in right before sound check of the bands gig and talk a little bit about what they have going on leading up to Charm City Bluegrass

KM: Born in San Francisco, CA this band doesn’t come from a typical place where you would think of associating bluegrass music with but you guys have made it work.  Tell me about the scene out in San Fran for bluegrass bands – you guys were actually labeled ‘Roots Pop’.  It’s obvious that your sound pays homage to the roots of bluegrass, but give me a bit of a background as I’m not really familiar with that area related to bluegrass music. MW: Yeah, this band is definitely rooted in bluegrass.  We started out as more of a bluegrass band invite jam in the Mission District in San Francisco.  There were actually a few places that were doing monthly and weekly bluegrass jams and nights and that’s kind of the scene we came up in.  We all played in different bands and just happen to come together in this configuration for a particular monthly gig.  We started playing, and I think we were all just impressed with the sound we were coming up with so we decided to enter band competitions in Colorado.  We wanted to see if we could take it further than California and see if it could be a national thing and make a mark for the San Francisco bluegrass scene.  It really is a thing – we have the Hardly Strictly Bluegrass Festival in Golden Gate Park that’s free and it’s tons of people.  You’ve got Del McCoury, Laurie Lois and EmmyLou Harris that play every year.  It’s a fun scene and it’s been going on for a while.  I grew up in the Bay Area going to see bluegrass band – my dad used to pick bluegrass with his friends – it’s definitely a thing.

KM:  Nice. You mentioned it, but you guys did just seem to be playing together for fun until you played on the stage at Telluride and entered the band competition, winning first place and then boom!  How did things change after that whole experience?

MW: After that, we got our first booking agent and got offered to play a few festivals that had a habit of taking a chance on young, up and coming bands.  Actually, we’re down in Texas right now and we’re about to play the Old Settlers Bluegrass Festival for the first time in 4 years.  They were one of the ones, 4 years ago, that took a chance on us and booked us and gave us our first summer festival outside of California.

KM: So everything is coming full circle?

MW: Totally, yeah.  We’re coming back to Old Settlers, we did Wondergrass again – they were another one of the first ones that took a chance on Front Country.  It feels good to start being a staple at some of these festivals.  We got to go back to Rocky Grass in Colorado for the first time this last summer so we’re kind of in our second round of going around the festival circuit and not being at the very bottom of the poster this time. MW: Oh my gosh, well I don’t want to give anything away that we might’ve been thinking about doing because we’re doing this kitchen covers series, where we do cover songs and we do them in a kitchen, it’s really kind of self-explanatory (laughs).  But we’ve thought about doing everything from Lady Gaga to Red Hot Chili Peppers to, what else is on the plate – Peter Gabriel, the band Haim – we’re really big fans of them.

KM: Other Love Songs – that whole album is just so heartfelt and written almost entirely by you, right?

KM:  How long was the road to that record being written, recorded and performed live.  What was the process like in a nutshell?

MW:  Well, as a song writer, I’ll have songs that are 5 or 10 years old – pieces of them, you know, that I come back to and finally finish.  It’s like this grand, lifetime sport, you know? (laughs)  So yeah – some of those songs were from bits that were really old and some were new and we started piecing it together.  Basically, I sent a sound cloud around to the band with maybe 20 originals of mine for them to pick from and then people kind of emailed their favorites and then we widdled it down to maybe of 10 of them and then, I think 8 of them went on the record.  That’s generally how we do it.  It was 2 years after we made our first record, Sake of the Sound, and then it’ll probably be another 2 year gap between Other Love Songs and whatever happens next.  We have tentative plans to record in early next year.

KM:  Well, that answers one of my next questions and you also kind of mentioned it, but you guys have a pretty busy summer – what are you doing to get ready for all the shows and festivals that you have coming up? MW: We’ve been focusing a lot on our live shows.  This winter we took some time off, we took almost all of January off and did some sound stage time in Nashville.  That’s one of the great things about Nashville, there’s so many professional music places and sound stages that you can work with.  We rented out a sound stage and tried a bunch of new gear, got more stuff on our pedal boards, and we’re kind of going further and further away from what any traditional bluegrasser might enjoy but we don’t really constrain ourselves in that way.  I’m bringing the pandero into the band which is a Brazilian tambourine, sort of mic’d up and that’s adding a drum kit kind of sound.  We’ve been trying out new gear and new sound stuff, really shaping our live sound and getting some new songs on the stage.  That’s our goal this whole year is to get some of the new songs that we might want to record on the stage, really worked in live before we record them.  We didn’t really get a chance to do that with the last one but we’ve been touring so much that we kind of have that opportunity.  We’re trying to take time off – in June we’re gonna take almost the whole month off and do more rehearsing and getting new material together so that we can put it on stage all summer.  Then hopefully by the time that we record early next year, everything will just be like riding a bike.

KM: Great.  I’m a big fan of the new record and I’m definitely going to try catching you soon when you’re in the area – you’ve got Charm City Bluegrass Festival and then you’re back around again at AMP up in Bethesda I think.   I know you have to go since you have sound check but thanks so much for letting us get some time with you.

MW: Of course, thanks so much!

Front Country are scheduled to perform on Saturday, April 28, 2018 at the Charm City Bluegrass Festival at the 8x10 And Union Craft Brewing Stages between 1:45P M and 2:50 PM.