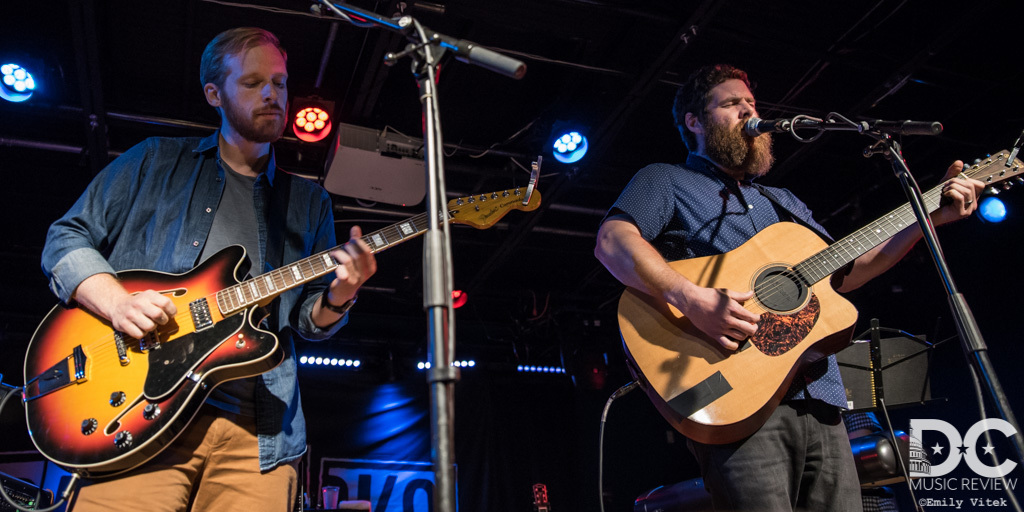 Just a week after the release of their long anticipated third studio album, III, indie rock band Bad Books returned to the DC area for an awe-inspiring performance at Milkboy Arthouse in College Park, MD. The joined creative forces of Manchester Orchestra’s Andy Hull and Robert McDowell with singer songwriter Kevin Devine, Bad Books has been delighting fans ever since their first and self-titled studio album was released in October 2010. Two years later they released their second album, II, which included the songs “The After Party” and “Forest Whitaker”. But Bad Books had been pretty quiet after the release of their second album in 2012, and went seven years without new music or performances, which makes their latest tour and album even more special. The 17 date tour spans North America over the course of June and August, stopping in cities such as Seattle, Portland, Los Angeles, and Phoenix. Joining Bad Books on tour is Brother Bird, the Nashville-based solo project of Caroline Swon. Brother Bird recently joined Manchester Orchestra on the road last fall during their tour with The Front Bottoms. Manchester’s Hull initially discovered Swon on YouTube when he was impressed by her cover of the Manchester song “Deer”.

Brother Bird opened up the evening’s performance with delicate songs including “Fog Horn”, “Astronaut”, and “Cloudy Collection”. During her set, she was accompanied on stage by McDowell who provided additional instrumentals.  Midway through the performance Swon paused for a moment to address the audience, saying “Thank you for being so attentive. It’s so nice to play music in front of people who are actually listening”. She later followed up by expressing that so far it had been the best tour she’d ever been on. Later in the evening Bad Books took the stage, with Hull and Devine on guitar and vocals and McDowell on keyboard. Bad Books opened up the evening with “Pyotr”, the devastating love story between Pyotr Zavadovsky and Catherine the Great. The song alternates perspectives to tell the story of Pyotr’s discovery of Catherine’s affair and decision to have the lover beheaded. The verses continue to detail how Catherine frequently visits the museum, which now contains her lovers head in a glass jar for preservation. The unique concept of the song is just the tip of the iceberg for Bad Book’s strong storytelling throughout their discography.

Throughout the performance they played other popular songs such as “The After Party”, “Friendly Advice”, “Forest Whitaker”, and “It Never Stops” off their first two albums. Near the end of the set, Bad Books played “You’re a Mirror I Cannot Avoid”, the emotional tale off their first and self-titled album that describes patience, acceptance, disappointment, and seeing the worst parts of yourself in other people.

First time I met you, I was full of fear
Knew that eventually, you'd disappear
Just when I needed you, you'd burned to smoke
And off you'd go” Hull and Devine spent the evening cracking jokes with each other and their intimate performance felt more like a family reunion than a concert. They introduced the audience to newer songs off the latest album including “UFO”, “Lake House”, “Wheel Well”, and “I Love You, I’m Sorry, Please Help Me, Thank You”. They ended the night with a three-song encore, composed of their new song “Neighborhood” plus older favorites “42” and “Ambivalent Peaks”. While this tour is halfway over, it is unclear what Bad Books has planned next. Before walking off stage, Devine waved to the audience and jokingly acknowledged their hiatus saying, “Thank you, we’ll see you in seven years”.

Click here to see the setlist for Bad Books performance at Milkboy Arthouse on June 23rd, 2019

3. Holding Down the Laughter

5. You Wouldn't Have to Ask

12. You're a Mirror I Cannot Avoid