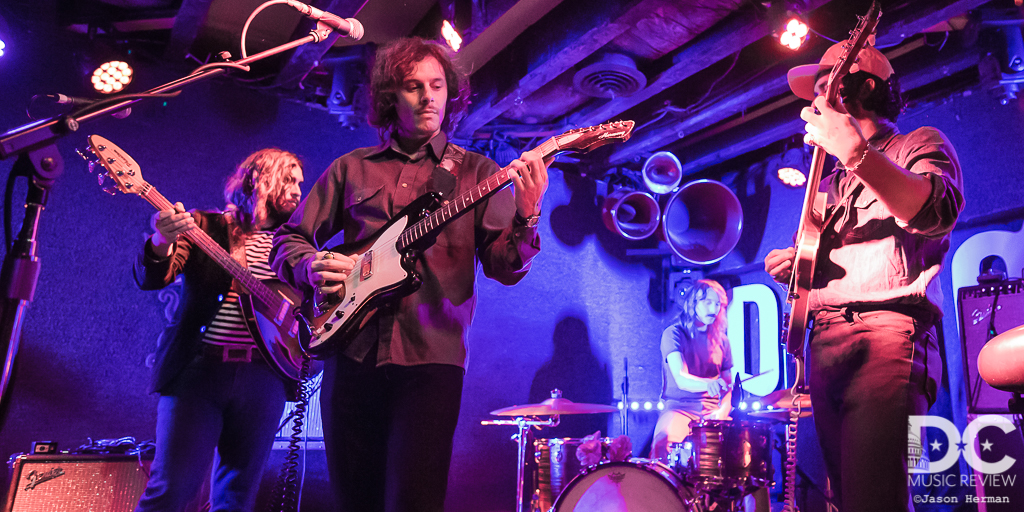 On Saturday, September 22nd, DC 9 Nightclub was transported back in time to the age of Aquarius as three psychedelic and groovy bands took to the stage - local Washington DC based The Beginners Mynd and LA based The Creation Factory and Mystic Braves. The packed venue did not lose any late night audience members as the swelling crowd continued dancing well into the wee hours of the morning as the Mystic Braves’ played a two-hour and 15 song set. The Creation Factory's tambourine player - picked up in Chicago.

The Creation Factory's tambourine player - picked up in Chicago.

The audience slowly packed the venue, many donning period outfits, to see hometown psychedelic rocker, The Beginners Myde. As The Creation Factory took to the stage at 10 PM, the venue was at capacity.

At 11 PM, as the members of Mystic Braves climbed up on stage, we recognized some familiar faces. The tambourine player that The Creation Factory had allowed to wield an instrument, twirling about the stage and punching it into the air over his head at times to accentuate a song, was none other than Julian Ducatenzeiler - lead guitarist, singer, and frontman of Mystic Braves. Julian Ducatenzeiler wasn’t the only familiar face - two other band members, Shane Stotsenberg and Ignacio Gonzalez, were also in the second opening band, and swapped instruments as well. When a one hour set is not enough, you know the musicians truly love what they do, and that was reflected in their comfortable and casual stage presence.

The Mystic Braves is psychedelic rock band from Los Angeles, Mystic Braves is a five person band consisting of Julian Ducatenzeiler (vocals, guitar), Ignacio Gonzalez (keyboard, percussion), Tony Malacara  (bass, vocals), Cameron Gartung (drums), and Shane Stotsenberg (guitar, vocals). With those LA looks and celestial vibes one wondered if they spoke with Jim Morrison and The Doors on the beach of Venice, California before packing up their tour van and headed east to perform for the audience along the Eastern Seaboard. A couple of beats of the drums, and a catchy melody picks up on the guitar, and their set begins with “Desert Island.” Their stage presence is laid back, yet engaging, and their style matched their retro sound. You can’t help but move to the music when you see and hear them playing. Their love for what they do is obvious. While their lyrics are not fully psych rock oriented, their sound certainly is, particularly the keyboard and the effects pedals.

Midway through the show the audience was shouting for, “Cloud Nine,” to which Ducatenzeiler replied they have that one for us, and a few more as well. He casually turned to his band mates and the audience nodding, and decided, “yeah, I think this is our best Washington, D.C. show so far.” The audience, already fired up, got even louder, and there was exciting electricity in the air.

"Cloud Nine" is one of oldest songs in the Mystic Braves catalog and actually predates their bands name and dates back to a time when they were called Blackfeet Braves. As fate would have it, as the Mystic Braves check into their hotel they happened upon another guest who had a vodka company - Cloud Nine Vodka.  Ducatenzeiler explained that they all shared a laugh with the owner as they explained they had a song called "Cloud Nine" As it turns out Cloud Nine Vodka is a regional liquor and is not sold in California.  Ducatenzeiler coyly  said they might have some Cloud Nine  at the merchandise booth at the back of the venue. We did not know which Cloud Nine to expect at their merchandise table.  We thought that perhaps the band was subtly trying to get audience members to head over and buy some of their merchandise. We could only assume it was a win-win situation as audience members could purchase some vodka or some great merchandise. They ended their show, and our retro journey, with one of their more popular songs, “Bright Blue Day Haze.” It was an amazing show both visually, and musically. They stayed loyal to their fans by playing a mix of old tunes, and new jams from their newest album The Great Unknown released August 17, 2018, which we highly recommend.

Click here to see the setlist for Mystic Braves performance at DC9 Nightclub on September 22, 2018​

5. Open Up Your Heart