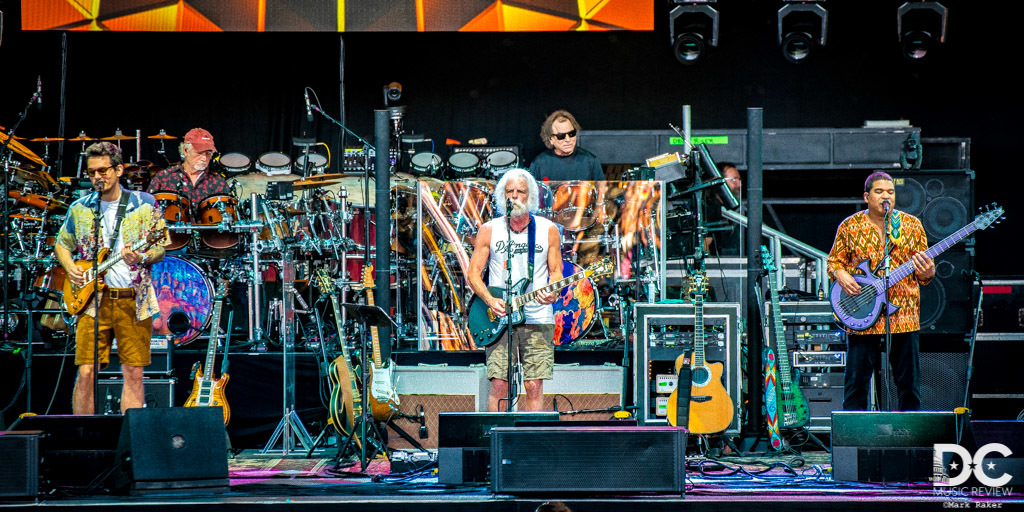 Never miss a Weekday Show! On a hot, but very pleasant summer day, Dead & Company hit Jiffy Lube Live in Bristow VA, this past Wednesday, June 26.  With a very strong setlist full of traditional Grateful Dead songs and a Dylan cover, the capacity crowd danced all night in a filled pavilion and on the lawn to the top of the hill. Original Grateful Dead members, Bob Weir, Billy Kreutzmann, and Mickey Hart and fellow band members John Mayer, Oteil Burbridge, and Jeff Chimenti have been on Summer tour since May 31, and close next week  with a pair of shows in Folsom Field, Boulder CO.

The first set opened with a slow, methodical and thoroughly enjoyable "Shakedown Street".  Weir's vocals were strong throughout the evening and kicked the show into high gear with a rousing "Hell In a Bucket". Following a particularly tasty "Cumberland Blues," the band closed a highly-charged set with an expected "Throwing Stones", the band's way of sending messages to nearby Washington, DC.

The second set began with the vocal harmony of "Here Comes Sunshine" and included a tight jam to close the tune. Next came "Playing In The Band" that featured some exquisite playing from Mayer, who appeared especially locked in. "China Doll" followed as Burbridge took the lead with beautiful vocals that stopped the crowd in their tracks. The party restarted with the fan favorite, "China Cat Sunflower -> I Know You Rider" duo that showcased the bands cohesiveness as Chimenti and Mayer riffed off each other, while Weir provided the power on vocals.  A very lyrical Dylan tune, "A Hard Rain's A Gonna Fall" and "U.S. Blues" closed the second set before the encore "Ripple", that had the nearly 25,000 fans singing along to end the night.

Enjoy the full photo gallery including pics from both first and second sets.

Hey Bristow! Are you ready to spread the love? Stay hydrated, take care of one another and most of all, SEE SOMETHING SAY SOMETHING!

Thanks for bringing the love tonight Virginia! pic.twitter.com/fWqki2Rrqv

Click here to see the setlist for Dead & Company's  performance at Jiffy Lube Live on June 26, 2019.

5. Friend of the Devil

Thanks for bringing the love tonight Virginia!