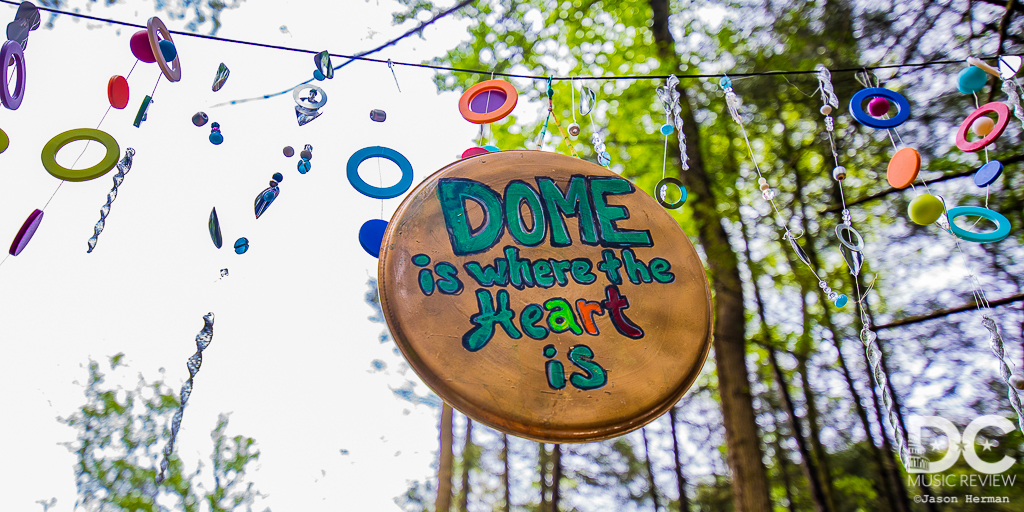 A good music festival can be just as much about the patrons as it is the bands that are playing. Sometimes you’re lucky enough to find the perfect mix of the two. When that happens, it creates a truly harmonious feeling that every single attendee will take with them even after they leave the festival grounds. This pretty much sums up what Domefest is every year. There was nothing but love of Funk and all the bands at the 9th Domefest.

This would be the 9th version of Pigeons Playing Ping Pong’s annual event, and it would prove to be the biggest and best one so far. With a sellout crowd of 1500 smiling faces ready to dance and have a good time, this flock would provide more than enough sunshine despite the rainy conditions that would persist throughout the fest.

The opening Thursday night music would get the weekend started off with a bang The Magic Beans, Formula 5, and the Strange Machines warmed up the hungry crowd on the main stage while Shwizz took the set break duties on the side stage. Of course, this is the Pigeons’ festival, and they let everyone know who the headliners were when they took the stage Thursday night. Playing to the theme of “Throwback Thursday,” the band’s only one set show of the weekend would not disappoint. This was also lead guitarist Jeremy Schon’s actual birthday, so fittingly the band started off the set with some birthday wishes. Most notably in this set was the bustout of two songs, "Candy" and "Dutchmaster", both of which hadn’t been played since 2012, and 2011 respectively. Just to pull the curtain back on this moment for the readers a little, there’s a very good friend of mine (and the band’s) named Mike. He is quite probably Pigeons fan number 1, and "Dutchmaster" was his golden goose that he had basically resigned to the band never playing again. So when they called him out by name, and dedicated the song to him, it was one of those special band/fan moments that you just can’t help but smile and feel good about. After the Pigeons set, the Mantras would take the crowd deep on the late night stage well into the night. Needless to say, despite the wetness and mud, day 1 was a great indicator of what the rest of the weekend would entail. Friday would bring more rain, and mud, but more importantly more great music and good vibes. I’ve never seen a festival crowd happier to be out in the rain and sloshing around in the mud. It seemed like a literal afterthought on everyone’s mind and that feeling was infectious. It was rainy in the campground, but sunny in our hearts.

The music on Friday afternoon would feature Flux Capacitor, Joe Hertler and the Rainbow Seekers, West End Blend, and Headless Robot. Mateo Monk and Cycles would take care of music during the setlist breaks, save for one setbreak featuring Schwa, which is the side project of Pigeons bassist Ben Carrey. Broccoli Samurai would set the stage for the first two-set P4 show of the weekend. Night 2 of Domefest right as Greg's voice began to give out.

As the first Pigeons set started it started to become apparent that something wasn’t right with Greg Ormont's voice. He basically let the crowd sing the whole first verse of “Poseidon” before it was clear that he wouldn’t be able to keep singing without completely losing his voice for the weekend. Pushing through the rest of the first set with superb versions of “Schwanthem” and “King Kong,” and even a bustout of the Jefferson Airplane classic “White Rabbit” which would be sung by drummer Alex Petropulos (impressively nailed at that). During setbreak we were all wondering how the second set would play out without a lead singer. Would they switch up vocals? Play a set of only instrumentals? Will Greg just keep trying to sing with a raspy voice? All those questions would be answered within about 10 minutes of the second set opening song “Whirled.” It became pretty clear once they started really getting deep in the jam what was going to happen, and it was pretty amazing to watch (and hear). They would take the song on a 60+ minute ride, making it the second time in their career that they’ve played a single song set (The first was on 4-15-18). This is a must listen for any fan of improvisational music; there really aren’t many bands that can keep a jam interesting for an hour. This one felt like something they had been working on for a while, which is the true measure of a great jam in my opinion. They would encore with one of my favorite of their instrumental tunes, “Avalanche.”

The Magic Beans would light up the late night stage on Friday, and they would not disappoint. Definitely a highlight of the weekend for me. This was only the second time I had seen them and now I know why so many people talk about them. They are a very promising band that everyone should keep an eye on. After some much needed rest, the final day of the festival would begin bright and early with Baltimore’s own Squaring the Circle opening up the main stage. The funky dance party would continue all day with bands like Ernie Johnson from Detroit, Backup Planet, and the McLovins. Baltimore power trio Deaf Scene would take up most of the set break duties on Saturday, aside from a special setbreak set by Pigeons front man “Scrambled” Greg Ormont.

All day people were wondering if Greg would try to sing at any point, the answer for this set at least, was that he would not. Using handwritten signs as props to speak to the crowd, he let them know that he had “lost his voice, so I’m just gonna jam.” And Jam he did, complete with a pretty impressive tap dance for good measure. Mungion would set the stage for the Pigeons final show of the weekend. It was the first time I had seen these guys, and I can’t wait to see them again. One of the great things about Domefest is how careful the band is about picking their support. Every time I’ve been to a Domefest I’ve come away with at least one new band that makes me want to seek out their music and see them live when I can. Mungion was one of those this weekend. After drinking an entire honey bear, Greg and his voice were ready to go on Night 3.

As the crowd waited for the Pigeons’ weekend finale, there was much speculation about Greg’s voice and if he’d be able to handle two sets of vocal duties. Miraculously, after saying he drank an “entire honey bear” before the show, he was back to his old form. Belting out crowd favorites like “Melting Lights” and “Penguins" the band definitely seemed to feed off the energy of their newly rejuvenated front man. The second set was maybe my favorite set of music from the weekend. The section of “Dome People > Su Casa > Horizon” felt particularly poetic. Dome people is of course about the festival itself and has been in the band’s rotation since Domefest’s inception, followed by Su Casa with its chorus of “This is your home now” and then Horizon’s “Celebrate the people you love,” this seemed like a very intentional musical hug from the band to the crowd, thanking them for all of the love and support that made the event so special. Another great highlight from this set was the debut of a cover of Pink Floyd’s “Shine on You Crazy Diamond.” Complete with a 4 to the floor funky jam for good measure. I love when a band takes a cover and makes it their own, and that is exactly what they did with this one. Ending with a raucous version of “The Liquid” and encoring with an incredibly fun “Julia > Super Mario > Julia” sandwich, they would put their triumphant stamp of success on this set, and the whole weekend.

The final night of the festival would see a double dose of late night sets coming from The Fritz, and Vibe and Direct. Both bands were absolutely great, they took full advantage of being the last acts on the bill and seemed to give all of the weekend warriors a second wind all the way to sunrise. To sum it up, Domefest is one of those very special small festivals. The hard work the band puts into this fest every year really shows in the product they put out. They are truly dedicated to making sure the Domefest experience is a great one for every single ticket holder. The band really cares about their fans, and the fans in turn show all of that love right back. Just to let everyone know, the band members literally work at the festival despite headlining it. When I arrived to the main gate, one of the first people I saw was Greg with a walkie talkie making sure everyone was getting in alright and things were running smoothly. This is something that people notice, and it goes without saying that all of us genuinely appreciate the effort. The flock is a great group of people too. Everyone all weekend was helping each other if they needed it, pushing cars out of the mud, helping people back to their campsites if they were struggling, offering dry clothes, spreading hay around to make it less slippery. It’s always really amazing to see a large group of people that genuinely cares about each other’s well-being and happiness. As the band grows, inevitably so will the festival. Hopefully all those same good loving vibes will continue to grow bigger every year too, and we can all continue to gather together each May to celebrate the people we love. Day 2: May 18th - Something Lost. A Wet Day and Scrambled Greg Looses His Voice

Day 3: May 19th - Something Shiny as Scrambled Greg Finds His Voice Again

Where the Flock Comes To Roost: Exploring The Pigeon Nest – Domefest 2018
Read More

Click on any of the following links to purchase the soundboard recording from Domefest.