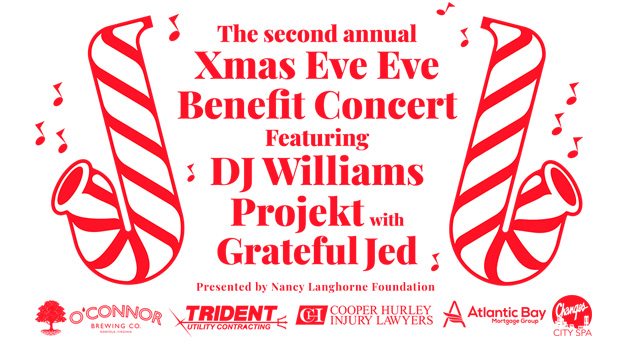 The holidays are a time for giving, so why not do good while having a good time? Not only is that the Nancy Langhorne Foundation’s motto, but they’re setting up a night for everyone to do so. The Nancy Langhorne Foundation is a cancer research nonprofit based in Norfolk, Virginia whose objective is to raise money for various cancer research programs. Their main fundraiser is their Christmas Eve Eve benefit concert, which was first held in 2017, the same year the group was founded. It featured DJ Williams, guitarist for Karl Denson’s Tiny Universe, and producer/DJ LilInternet. The event was a great success and raised $10,000 which was donated to immunotherapy trials at Memorial Sloan Kettering Cancer Center for aggressive types. This year’s proceeds will be split between MCV, EVMS, and Memorial Sloan Kettering and go to funding research trials for breast, pancreatic, stomach, and uterine cancer. DJ Williams will be returning to the stage with his band DJ Williams Projekt and Norfolk’s own Grateful Jed. DJ Williams Projekt is a soulful combination of funk, jazz, and bluesy rock that will have everyone out in the crowd shaking what they got late into the night. In addition to KDTU, Williams plays with supergroup DJ Williams’ Shots Fired that features members of Dave Matthews Band, Slightly Stoopid, Trey Anastasio Band, Lyrics Born, and more. Williams has shared the stage with countless musicians including John Legend, Warren Haynes, the Neville Brothers, Sharon Jones, and Dave Matthews Band. Grateful Jed was a side project of Hampton Roads veteran musicians that has turned into a full-time gig that pays homage to the band famous for stealing faces, The Grateful Dead. Like the inaugural event, this year’s event will be held at the award-winning O’Connor Brewing Company, so everyone can enjoy some of Hampton Roads’ fine local brews. In addition to the craft beer, there will be food trucks to keep bellies full and Richmond’s HotBox Screen Printing will be printing shirts on demand with three options to choose from. There will be a raffle featuring signed music memorabilia, gift certificates to local businesses, and local artwork. Raffle prizes include the following:

-The Company We Keep book by the Drive-By Truckers

This event is 21+, so please leave the kids at home. Tickets start at $20 and there are bundles that can be purchased to save you money to put towards more raffle tickets to win some of these great prizes. See the links below for more information!

Enjoy photos by our photographer Sean Chagnon of Eye of The Storm Photography. Photos not watermarked have been provided by the Nancy Langhorne Foundation.