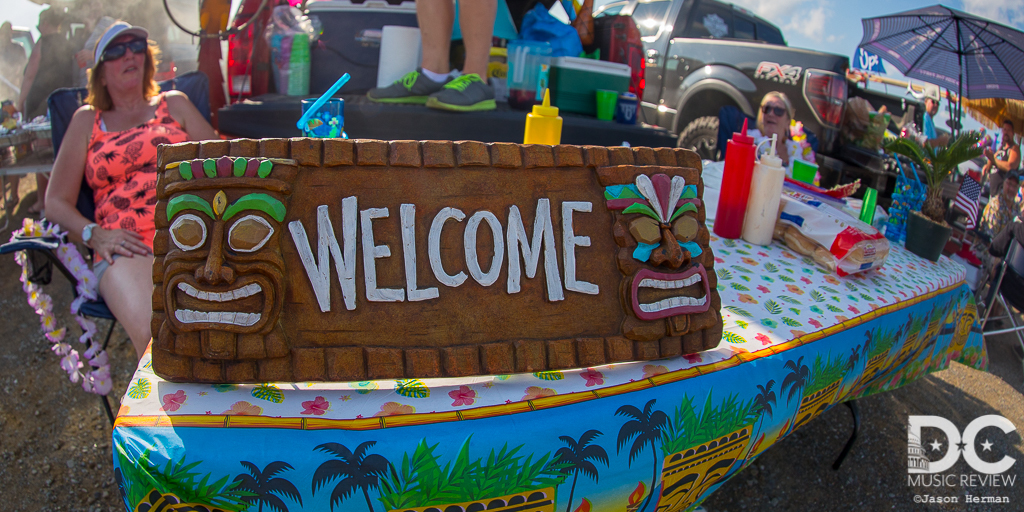 Jimmy Buffett and the Coral Reefer Band made their annual summertime visit to Bristow, VA's Jiffy Lube Live on Saturday, August 4th, with thousands of devoted fans flocking to the Northern VA amphitheater for a night on island time with the easy listening icon. Turning the parking lots of Prince William County into Margaritaville for one day only, Buffett's following, known as Parrotheads, spent their afternoon tailgating and preparing for the Saturday night party for which they'd descended on the venue from far and wide. We spent the afternoon partying with the Parrotheads in hopes of getting the true Buffett experience before the show even started. Our group came prepared with plenty of food, drinks, coolers, chairs, etc. The works. But as soon as we arrived it was clear that we were truly rookies to this scene. The fans around us set up elaborate tiki bars, inflated decorations, blended Margaritas, and - in one case - unloaded an ice luge for liquor, in case you needed a more thrilling way to take shots. Despite the scorching hot sun and humid conditions, this fan base was not deterred from wetting their whistles in anticipation of the party that would cap off the night.

Arriving on the lot pretty early, venue staff were determined to contain the festivities from the start, stopping fans from setting up their liquor collections, table games, and canopies. The group parked next to us was well aware of these obstacles, quickly setting up an umbrella to keep out the sun, proclaiming "we know from the last few years that they won't allow the EZ Up." We were assured that if it weren't for the heavy-handed security presence, the pre-show festivities would be truly off the hook with more sand spread over the parking lot, and extensive tailgating setups. Still, they knew it was only a matter of time before they could carry on with their pregame plans once the lot filled with more cars and provided a bit more cover. At that point, one Parrothead from Georgia commented, the security decides, "if you can't beat 'em, join 'em!" Amidst the sea of car-top shark fins, "It's 5 o'clock somewhere" signs, inflatable parrots, "Fins Up" tattoos, Hawaiian shirts, flamingos, corn hole sets, and pirate hats, it was clear that every fan in attendance was on Island Time, seeking out a night of relaxation. I encountered one fan with a shirt that read "Margaritaville is a way of life," a message that was crystal clear to me before I even made my way through the crowd of more than 20,000 to get to my seat in the pit. One crew was there representing four generations of Parrotheads (and Parakeets, as the youngest fans are called) in their family. The family patriarch was attending the show with his children and grandchildren. His mother, he had mentioned, was in attendance at the show last summer, but passed away earlier this year. Still, this family was so dedicated to the Parrothead scene that they brought her remains in an urn to be part of their day on the Son of a Son of a Sailor Tour 2018.

Coming into this show, I knew almost nothing about Jimmy Buffett. I knew two or three songs, that he owned Landshark Lager and two restaurant chains, and that he had a cultish following that called themselves Parrotheads. But as soon as I took my seat, I could appreciate his dedication to the brand he has cultivated of "drunken Caribbean rock 'n' roll." The set looks like a dock, complete with seagulls, decorative mermaids, and screens that look like sailboats and shark fins, and Jimmy Steps onstage, barefoot as always, with his wristbands and board shorts, ready to treat his adoring fans to a night of hit songs, lively covers, and localized banter. From the opening notes of the show through the set-closing "Changes in Latitudes, Changes in Attitudes," Jimmy showed an almost symbiotic connection with his audience, feeding their energy and being fed in return. Beach balls flew through the air all night as Buffett played all of his classics, including "Cheeseburger in Paradise," "Son of a Son of a Sailor," "Volcano," and "Come Monday." And of course, the Parrotheads joined in for a little choreography during "Fins," then transitioned from one song to the next with scripted banter from Buffett. Taking some time to note his frequent visits to the DelMarVa region, Jimmy acknowledged that he had played Jiffy Lube Live upwards of 30 times prior to that night. Jimmy and the Coral Reefers worked through their set with incredible energy and a tightly woven sound before reaching the show's denouement in the final three songs, "Margaritaville," "Why Don't We Get Drunk," and the aforementioned "Changes in Latitudes." Jimmy Buffett brought out the ever faithful Parrotheads!

Walking out of the show, and being careful not to step on any passed out Parrotheads on the lawn, I was able to appreciate the size of the crowd. For one Saturday night in August, these 20,000 or so people were given a chance to escape the worries of the real world and enjoy something that was a just pure distillation of fun. It was a care free night that managed to transport these DC area fans to the beach, even if only in their minds and flip flops. After all, it is 5 o'clock somewhere.