Getting to Know: The Sweater Set 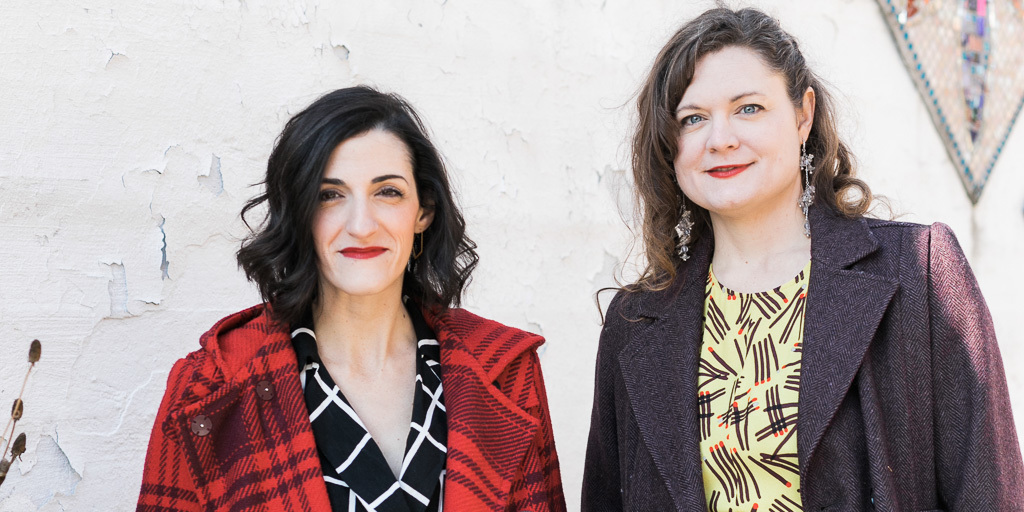 We are thrilled to kick off our new interview series, "Getting to Know," with one of the most heartfelt, earnest, endearing, and full-on delightful bands in town, The Sweater Set.

DC natives and multi-instrumentalists/singer/songwriters Maureen Andary and Sara Curtin have known each other for a long time and it shows.  When you hear them perform as The Sweater Set, it feels like you are experiencing a sweet musical destiny. Not only do their voices complement each other perfectly, their songs are as real as it gets without ever trying to hard. They sing about love, loss, and life's nuances in relatable ways. They remind me of the strong and smart women throughout my life I look to as sages. They know how to weave songs and lyrics in a way that gently holds you by the hand like a friend would, but without making things awkward. They make you feel less alone, more "got." It's a gift.

Their fifth studio album, Fly on the Wall, will be released on May 8.  Maureen and Sara were scheduled to perform their album release show at the exceptionally cool Mansion on O Street, (now rescheduled for September 10). In the meantime, we wanted to learn more about them, how they are spending their time during the quarantine, and the new album.  ​

What’s new with you these days?
Sara Curtin: I have blonde quarantine hair - it might be on its way to pink!

Maureen Andary: My kids see so much of me, they don’t cry when I do bedtime anymore!

How did you two meet?

You have a new album! In a few words, how would your best friends describe it?

What inspired this album?

Sara: In 2018 we were celebrating The Sweater Set’s 10th anniversary and I thought we should do something really special. We were both starting to think about having babies, so we knew we wanted to write and record an album together before our lives changed too dramatically. I actually wrote the song “Change” after Maureen told me she was pregnant in Dec 2018! This inspired the live one-night only recording event with an audience present. We knew we didn’t have much fancy-free time left.

What do you feel is the best song you’ve released and why? Both: That’s a tough question for this duo because we don’t co-write! From this new album we agree that “Being Alone” is Sara’s best and “In Another Life” is Maureen’s. “Being Alone” is simple but still challenging and confrontational just like actual alone time can be, especially these days with all of the technology. ‘When did we get so bad at being alone?’ It’s very relevant right now, too.

“In Another Life” is an exploration of grief. Maureen’s father died 5 years ago and she came to wonder, “What is a soul? What is a memory?” The question doesn’t get answered so much as explored. Your relationship with the dead doesn’t end. What does it look like to the living? This song will mean something to those who have lost. Something consistent about these two songs is that they’re not romantic love songs. We love 'love songs,' but we’re intrigued by exploring other complex issues as well.

Name three local artists that you are listening to these days.

Where is your favorite place to eat in the DMV? (Bonus question: do they do take-out/delivery?)

Maureen: Cielo Rojo is my new favorite! Get their market salad with chicken on top. Curbside pickup in Downtown Takoma Park.

Sara: Thip Khao in Columbia Heights. Unfortunately according to their website they are closed for the time being.

Name three books (or songs or movies) that changed the way you think about things.

Maureen: The Philosophy of Andy Warhol — made me look at things more plainly and with more light and playfulness. I began taking myself less seriously after reading it.

An Unquiet Mind by Kay Redfield Jamison. For anyone that struggles with mental health, this is an INCREDIBLY powerful book about one psychiatrist's own trials.

The Pill Versus the Springhill Mine Disaster by Richard Brautigan — a short book of poems I found on my dad’s bookcase. Reading it was the first time I realized art could be funny!

What is your favorite museum in the DMV?

Both: The National Portrait Gallery — not only is it a combination of both art, history, & contemporary culture — it was/is also host to many a live music show!

What are you doing to take care of yourself these days?

Sara: As I mentioned before, I bleached my hair in my bathroom, HA! Just kidding. I record a song a day in a video series I began on March 16 when it started to sink in that we were going to be in this for the long haul. It’s called “From The Family Wall” because I perform in front of photos of my family and ancestors. It makes me feel grounded to sense them over my shoulders while I sing.

Maureen: I’m investing a lot of time into my new little work-from-home space! Not only have I made it practical (with music, guitar, & phone stands, shelves, etc.) but it features some beloved trinkets: my dad’s old radio which I use to listen to NPR, one of my grandmother's living room lamps, a fun cactus light from my childhood friend, and my NLCS clincher game ball signed by Sean Doolittle. It makes me happier about staying home.

What do you think the DMV music scene will look like in 2022. (This is a tricky one!) Maureen: Online music lessons will remain extremely popular and will take the place of many in person classes. Performances will often be to smaller crowds. The Kennedy Center shows and all the other big venues will be half full. I think they’ll sell less tickets and promote social distance within the theatre. I actually think ticket prices will go UP because they will allow less people inside. Church for church musicians will look identical to what it looked like before. People are super hung up on their worship experience. It took a LOT to get people to stop going to church.

Sara: For my own sanity right now I need to be optimistic about the return to live music concerts. I think it’s great (and necessary) that so many groups are making lemonade right now and performing at home for tips online, but I can’t wait for the end of live-streamed concerts. I have such a hard time watching them and being present with that artist because I’m either on my phone with texts popping up, or on my computer with other tabs open (or BOTH), not to mention my own dirty dishes and scattered baby toys staring at me from beyond the screens. It’s expected that audience sizes and rules will change, but music is such a shared experience between performer and listener that I know we will get back to a place where we can have that relationship again as soon as possible.

Thank you both so much for sharing with us. It's always a pleasure to see you perform, and I can't wait until we can catch you shows in person again!

Until then, here's hoping that these strange days inspire more beautiful music from you.

The Sweater Set's new album Fly On The Wall is out on May 8, you can pre-order it in the link below! You can pre-order now!

To learn more about The Sweater Set, please check out the following sites: