Ghost-Note and Backbeat Underground Give Funk Flavors a Powerful Kick 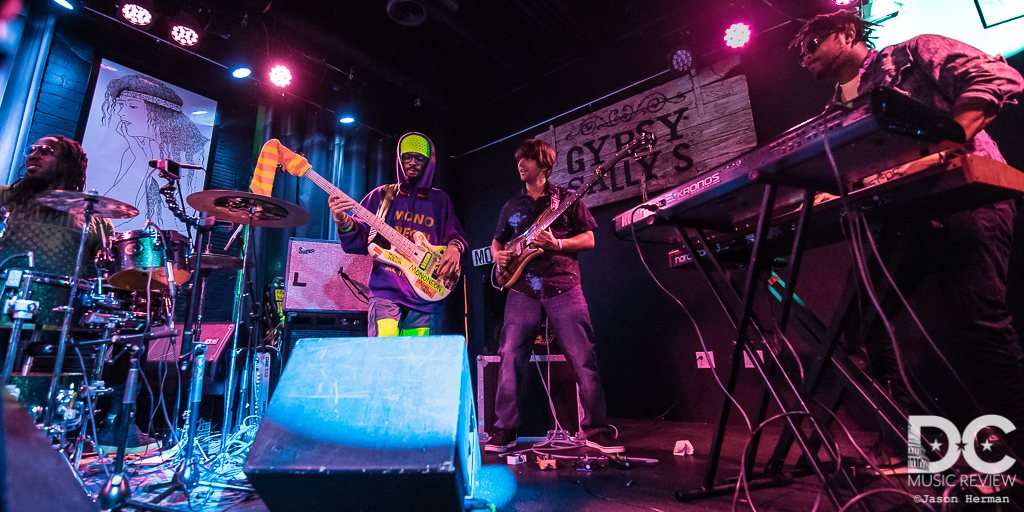 Good music is a lot like good food.  “[T]hree or four ingredients, as long as they are of the highest and freshest quality,” as the late Anthony Bourdain put it, “can be combined in a straightforward way to make a truly excellent and occasionally wondrous product.”  Fresh tomato and basil?  That’s a top-notch pomodoro sauce.  A fresh piece of fish with a dab of sticky white rice?  Exquisite sushi.  A rhythm section with a perfectly locked-in pocket?  That, my friend, is the stuff of funk.

After a night of deep-pocket grooves served up by Ghost-Note—the funk-fusion project of Grammy-winning Snarky Puppy drummers Robert “Sput” Searight and Nate Werth—and local instrumental funk outfit Backbeat Underground, no one would in attendance would doubt that rhythm is funk’s secret sauce.  In both groups, the drummers and bassists laid down unshakeable foundations for soloists to shine and for a mélange of jazz, hip hop, and other influences to take hold. Backbeat Underground drummer RJ James gave the night a proper start by firing up a heavily bumping kick and snare on “Takeback,” one of several lively funk tunes that, along with “Less I Know the Better” and “Scrambled Eggs & Brie,” gave DC a proud answer to contemporary instrumental funk giants Soulive and The New Mastersounds.  Between upbeat funk jams, the band found room to branch out and show off its originality.  The playfully named “Half Asleep in Frog Pajamas” marked a notable early departure, with a curiously accented bassline feeding a dark jazz groove. Sparse, harmonized saxophones delivered the melody, and guest tenor player Dan Janis took off on a high-flying solo that swiftly moved back and forth between creating tension and returning our ears to the supporting sound. The band also took the opportunity to explore different feels on “Splankify,” an original that kicked off with a go-go beat, moved into laid-back jazz fusion, and wound up in an instrumental version of A Tribe Called Quest’s “Electric Relaxation” (or, if you prefer, seventies organist Ronnie Foster’s “Mystic Brew,” which provided the sample to the Tribe beat).  Taking a short trip further out of the funk arena, the band offered up an original take on Radiohead’s eerie OK Computer classic “Subterranean Homesick Alien.”  Alto saxophonist Satya Thallam introduced the cover as a nod to the thriving DC music scene and the Radiohead Tribute Planned Parenthood Benefit that brought together over forty musicians at the beginning of the month.  A backbeat pocket from James combined with bluesy riffs from guitarist John Wedeles to give this song a wholly different feel from the original, highlighted by a peaking guitar solo that launched the final chorus section. By the time Ghost-Note hit the stage, the crowd had gotten a hint of the other-worldly musicianship that was to follow.  Alto saxophonist Jonathan Mones joined Backbeat for their final tune and absolutely floored the audience, going full-throttle with insanely fast runs and a screaming upper register.  In addition to Mones and the founding Snarky Puppy drummers, the band’s deep lineup boasts bass wizard MonoNeon, keys man Xavier Taplin, and saxophonist Sylvester Onyejiaka II (all of whom played with Prince), as well as young bass-picking talent Cody Wright (that’s two bass-guitar virtuosos for those keeping score).  And while the impressive cast could easily be a double-edged sword, highlighting jaw-dropping individual performers by falling into a humdrum game of pass-the-solo, Ghost-Note avoids the trap.  The band specializes in vacuum-tight timing and a hot, propulsive energy guaranteed to move any room in the country.

When called upon, soloists fed that energy with flair.  On guitar for “Swagism,” MonoNeon pulled out technique that lived up to the tune’s name, using quick rhythm strokes to whip the band out of the breakdown and back into a contagiously dancey groove.  With the band giving him even more rope on “Smack ‘em,” the internet sensation justified his bass-nerd YouTube stardom with equal parts true-to-pocket funk and furious fretboard exploration.  The sexy strut of “Smack ‘em” also set up Onyejiaka for a downright nasty solo on baritone saxophone, expertly comped by snare flams from Searight. At times even the band was surprised at their soloists’ acrobatics.  After a wah-pedal sax solo from Mones on “Pace Maker” drew a major rise out of the crowd, Searight validated that we had witnessed something special: “That’s the first time we’d heard him solo over that, so . . . that was quite the experience for the band.”

“Shrill Tones” gave the night the ending it deserved, the rhythm section firing on all cylinders.  In what sometimes had the feel of an old-school cutting contest, the two bassists traded fills and then passed the duel off to the band’s founding members hitting the skins.  The tune had been led in with a snippet of Billy Cobham’s “Some Skunk Funk,” and the famously blindingly fast fusion drummer would no doubt have been proud to hear the high-energy drum battle that ensued and left the crowd with its hair blown back.

If rhythms are funk’s key ingredient, Ghost-Note is clearly cooking with gas.

Click here to see the setlist for Ghost-Note's performance at Gypsy Sally's on June 14, 2018

Click here to see the setlist for Backbeat Underground's performance at Gypsy Sally's on June 14, 2018

4. Less I Know the Better