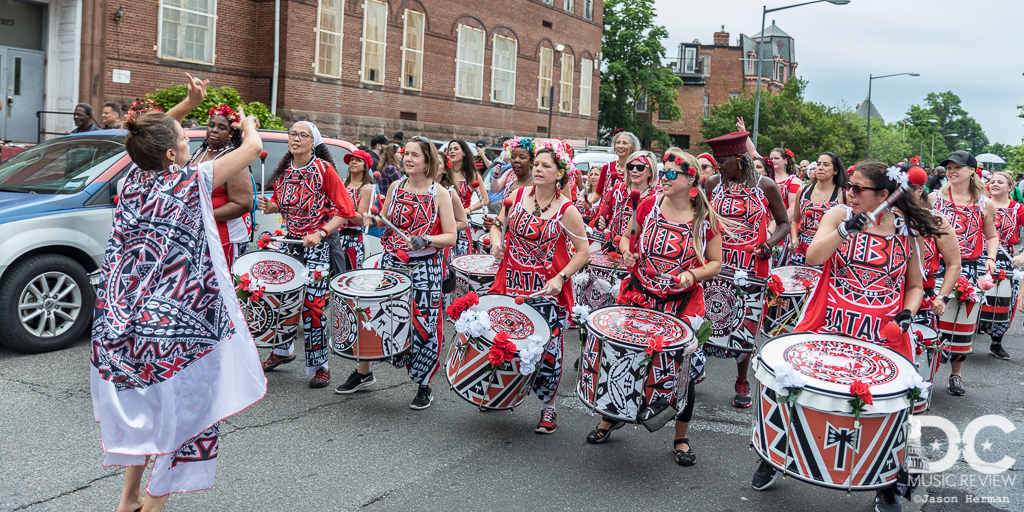 We take a moment to reflect on what would have been. Residents of the DC Metro Area would have celebrated the 7th Annual Funk Parade this past Saturday, May 9th. Although the sun was shining among beautiful blue skies, we would have all noticed the unusually brisk weather marked by a day barely reaching 50 degrees. It may have been a slight inconvenience, but residents, vendors, and musicians alike would reach into their closet for an extra layer or two and take a jacket with them. Undoubtedly many would comment that at least we were spared the wet conditions present in Funk Parades in the past. DC Music Review fondly looks back to those editions, rain at times pouring down sideways or PA systems shorting out. Although some weather conditions were less than favorable, there was one thing that pierced through the day like when the sun pierces through storm clouds - the incredible sense of community, the sense of DMV Pride, and the funktastic time we all had as sights, sounds and music filled the air.

Speaking of the The Wammies, this leads us to one of the steady heartbeats in the Washington DC music scene and community at large - The MusicianShip. The MusicianShip not only puts on the Funk Parade and The Wammies, and the Washington DC Youth Choir but at its cores is a youth development organization that provides music lessons, experiences, and opportunities to benefit those who need it the most.

Please read the article below or just click on this link to help out this vital resource and presence in our community.

The 2019 DC Funk Parade was a FUNK-tastic event held in the vibrant and ever-evolving U Street Corridor in downtown Washington, DC. Now celebrating its sixth-edition, it is hard to imagine life in DC without this sincere and joyous celebration of its musical roots and vibrant music scene. Six months ago The Musicianship took over the management and execution of the parade and it did not disappoint.

"Funk Parade is a one-of-a-kind day fair, parade and music festival, celebrating Washington DC's vibrant music and arts, the U Street neighborhood, and the Spirit of Funk that brings us all together."

The day's events started off with the very relevant #DontMuteDC Conference. As DC's Landscape has changed, so too have the issues affecting DC's residents and business. (Note: You can find the conference video embedded at the bottom of the article). By noon the streets were still quiet, but you could see stagehands putting finishing touches on stages and bands preparing to pack in their equipment in. As we roamed the streets we came across members of Washington DC's emerging band Bencoolen. As they prepared to hit the stage they talked about their recently released album Daydream, tour, and future recording plans.

As we walked up and down the U Street Corridor, music poured out of official stages and impromptu street corner busking. No matter where you turned you could feel profound pride and deeply-rooted passion for the music performed by musicians and the genuine appreciation by every individual in attendance. Small children danced instinctively to the beat of the music and moved their arms about as they imitated the musicians on stage. Each block of the Funk Parade was filled with new music, new sights, and new cheers. 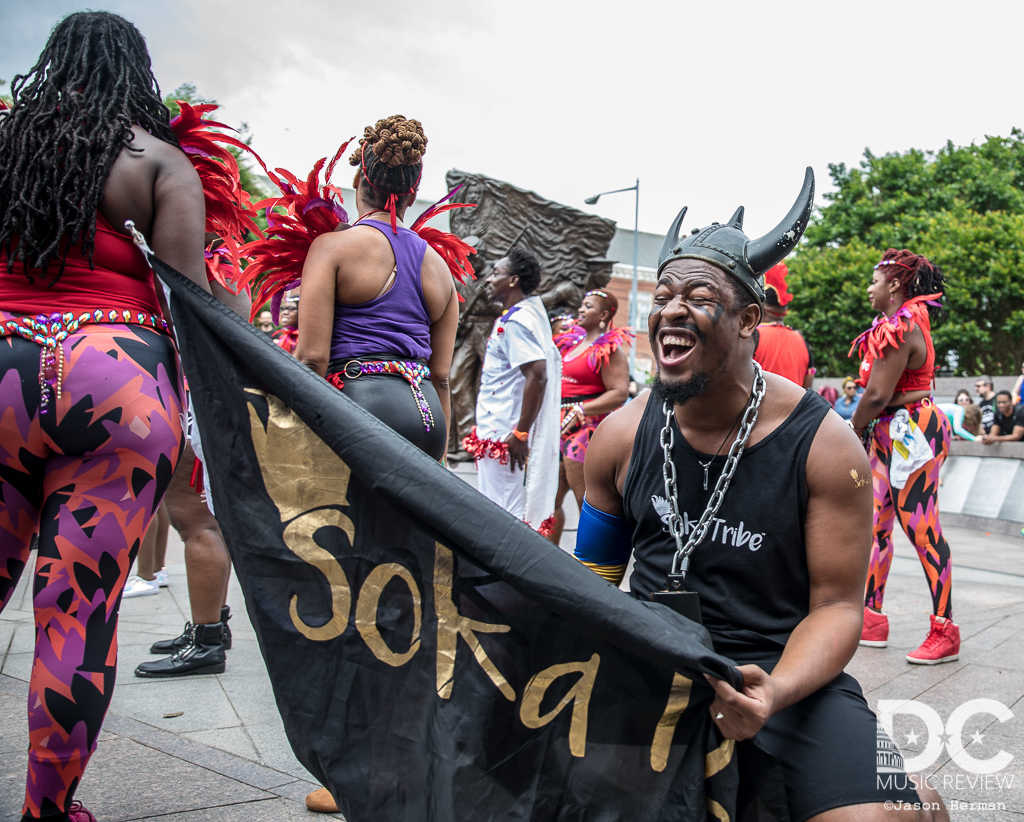 DC Music Review found new reasons to celebrate at every venue. At one venue we met a couple that was only married the day before wearing "Just Funk'n Married" and told us how they were enjoying their “Funkymoon”. One of the midday show stoppers was the all-out dance party held by the Soka Tribe group - a dance fitness studio that specializes in the rhythms and spirit of the Caribbean. It was easy to spot a Soka Tribe member as Carribean music filled the air, colorful outfits twirled about and ear-to-ear smiles permeated on the faces of all the tribe members.

Another reason for the smiles and reason for celebration was the weather, or better yet, dry weather. For the better part of a week all eyes were on the local weather forecast and anxious eyes paid attention to the weather and the skies above wondering if it would rain, would it just be cloudy, or would the rain hold off until later in the evening. It did rain, but only at the tail end of the Funk Parade. As luck would have it, the rain held off until late in the afternoon when the first raindrops fell as the trailing police car of the Parade approached its final turn onto U Street. Despite the rain, the prevailing attitude by many in attendance was, "You can either wait for the storm to pass or you can enjoy dancing in the rain." By the time the rain did come down on U Street, people were too festive and too funky to let an onslaught of rain spoil the party. Some attendees took refuge in the local watering holes and eateries while others took shelter under trees beside the African American War Memorial as the last band, the Chuck Brown Band, hit the main stage. 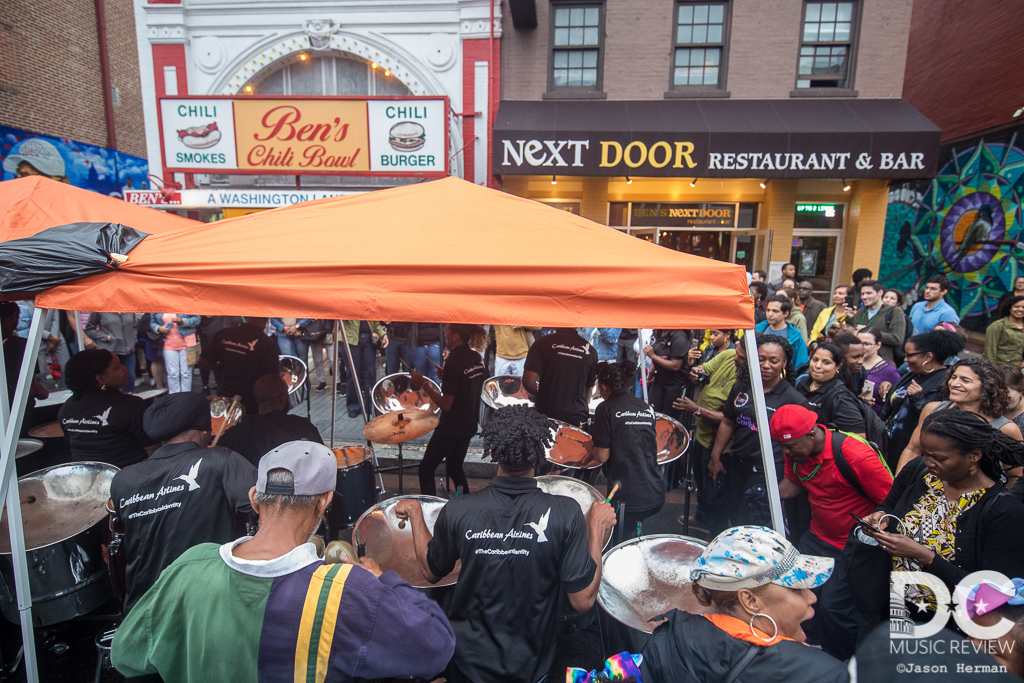 Despite the rain, or maybe because of the rain, a truly special moment happened at the Funk Parade: the PA system gave out during the Chuck Brown Band's performance and the band had to perform without vocals. As they performed one fan favorite after another, fervent audience members sang out aloud. There was no need for a PA system - the audience knew Chuck Brown's songs by heart. As the Chuck Brown Band left the stage - the last of the daylight performances - festival goers made their way home or went to catch a short bite before the evening performances started. If you decided to eat at Ben's Chili Bowl, you noticed a very large crowd spilling onto the street as a Carribean troop performed to hundreds of mesmerized fans gathered around two popup tents containing nearly a dozen steel drummers.

The best way to sum up the Funk Parade is that it was a genuine celebration of DC talent,  which oozed out of every nook of the festival. It was a celebration of DC and the many cultures that have intertwined themselves to make our city so wonderful. If you did not have the opportunity to attend DC's Funk Parade we can strongly encourage you to come out next May to celebrate DC, its music, its musicians, and its residents. We look foward to May 2020 (Editor: Sadly, make that 2021) when once again the DC Deparment of Funk presents another edition of the Funk Parade, truly the subatomic particle of love!   We look forward to seeing you next year and celebrating the Funk Parade with you as we celebrate Washington DC and our community.