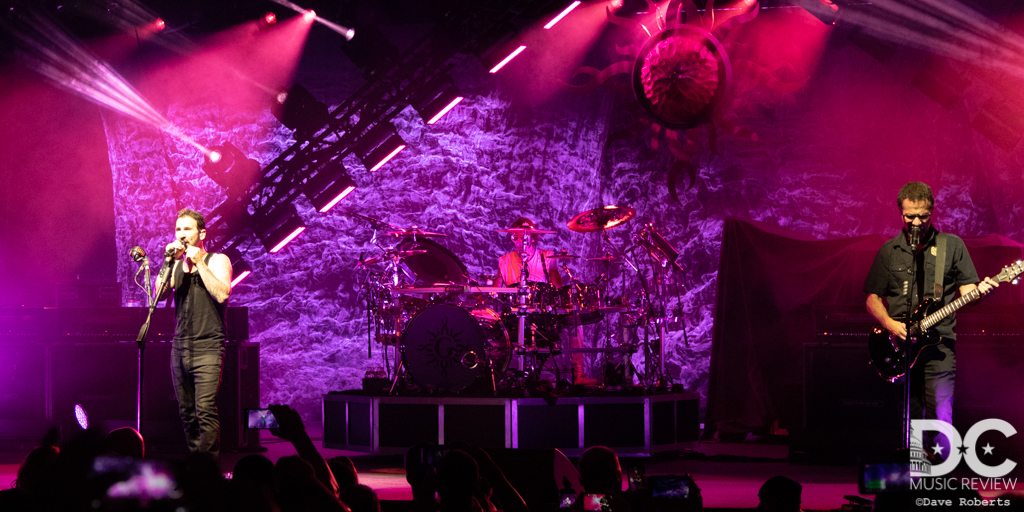 It was steamy in Baltimore on Sunday night July 14 at The MECU Pavilion.  Now throw in some hard-rock heat on top of that and it made for a sweat-filled party of loud, guitar driven music that shook the bedrock floor of the Inner Harbor.

Opening the evening was a newer band to the scene from California, New Years Day. When lead singer Ash Costello asked the crowd how many fans have seen the band before, there were some, but not many.  Happy to be sharing their hard-rock music with lots of new fans, she also said that they often play at the Baltimore Soundstage, so be on the lookout for this up and coming band.

Rolling through a 45-minute set, New Years Day definitely has a crunchy, pop-metal sound with a melodic undertone to it.  The energetic lead female singer who was very excited to be opening for Godsmack, Costello thrived on her role to be gearing the crowd up for the headlining band. Getting the crowd involved with their set right from beginning, New Years Day tore through songs including “Kill or Be Killed” and “Defame Me,” as well as new songs off of their latest Album Unbreakable (2019), “Come to Me” and “Skeletons”.

New Years Day easily made some new fans in Baltimore, including myself.  They will be hooking up with Halestorm for some shows later this summer, which will prove to be a great female-fronted band show for sure.  Be sure to check out their new album and show some support to a great sounding hard-rock band.

Click here to see the setlist for New Years Day's  performance at MECU Pavilion on July 14, 2019

With a big tapestry donning the Godsmack logo hanging in front of the stage, fans went haywire around the 9:20 mark when it was pulled back.  Wasting no time at all, Godsmack got right down to it, and ripped into “When Legends Rise” as the opening song.  I have seen these cats numerous times over the years, and believe me, they have never failed to put on a rowdy, head-banging show.  Frontman, guitarist, and drummer Sully Erna has the perfect spirt and attitude to grab a crowd and just immerse them within the Godsmack sound. Starting out in the mid 90’s in Boston, Godsmack has stayed faithful and true to their fans over the years as their sound has remained solidly consistent.  The boys certainly gel together on stage, and you can tell there is a deep respect that they share through their musical talents while sharing the stage throughout their performance.  Holding nothing back, these guys are out to entertain and energize the hyped-up audience and take them on a hard-rock journey.

Along with Erna, Tony Rombola shares the guitars within Godsmack.  While Erna stays pretty active during the show, Rombola sits back and takes a more chilled approach while bringing his hard-rock licks to the audience.  On the other hand, bassist Robbie Merrill and drummer Shannon Larkin pour an intense amount of energy into their show.  The expressions that these boys serve up while practically tearing apart their instruments in priceless.

Still hot on their latest tour supporting their most recent record When Legends Rise (2018), Godsmack continues to release great rock albums.  Sully believes the latest release encompasses the bands best writing, full of emotion making it a very special record for the boys.  There are definitely some great tracks that the band has been featuring in their shows. Mixing up a nice variety of new and old songs, Godsmack easily has a plentiful vault of music to pull from to fill a 90-minute set, and they made some good choices Sunday night in Baltimore.

From heavy hitting new songs such as “Say My Name” and “Bulletproof”, to old classics like “What” and “Keep Away” from their first release, the entire setlist was filled with straight ahead Godsmack Rock.  Highlights from the show include “1000hp” and “Something Different,” as well as when Sully teams up with Larkin for a full-onslaught of drumming insanity.  Bringing two full kits stage front and center, these boys are smiling from ear to ear as they rip through and tease such hits AC/DC’s “Back in Black,” Led Zeppelin’s “Black Dog,” Rush’s “Tom Sawyer,” and Metallica’s “Enter Sandman”.  Totally feeding off of each others energy, this part of the set is always a treat.  Man, such energy and talent! Sully and Shannon Killin' the Drums

Sully and Shannon Killin' the Drums

As the band readies itself for the encore, the roadies roll out a keyboard for Sully to share some intimate news.  The band having recently started their own charity called The Scars Foundation, Erna shares about some of his personal stories and friends that he has lost over the years due to suicide and depression. His new charity is reaching out and searching for new ways to help with these issues, and raising money to help provide resources for people struggling with similar circumstances.  You can find more information about it on the bands website here.

Winding down their night at the MECU Pavilion, Godsmack was happy to be back. “It’s been too long since we’ve played in Baltimore”, Sully explains.  With a band that keeps a pretty busy touring schedule, hopefully it won’t be that long of a wait until the band returns to Charm City.  I can’t say enough about this venue, the atmosphere that comes from a smaller sized pavilion, combined with a beautiful landscape right on the harbor along with one of the best hard-rock bands out there makes for a perfect night of Metal Bliss.  Keep Rockin' Baltimore!

Click here to see the setlist for Godsmack's  performance at MECU Pavilion on July 14, 2019

Encore:
1. Under Your Scars
2. Bulletproof
3. I Stand Alone

To learn more about The Scars Foundation please click on the following link.  Remember, we are all imperfectly perfect: