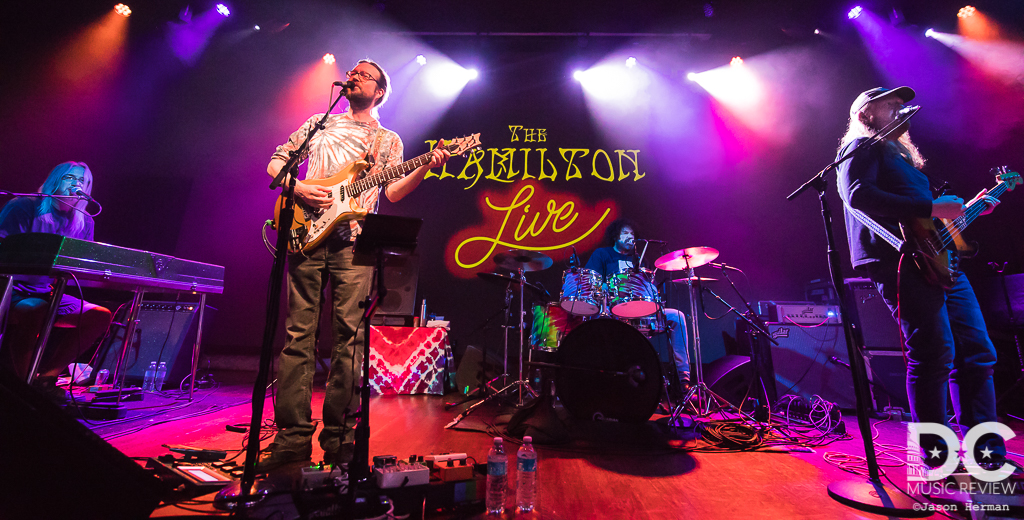 RJ Bee is the co-founder and CEO of the Osiris podcast network and co-founder of the Helping Friendly Podcast. The Hamilton's Closed Circuit Broadcast included a very welcoming backdrop for fans of the Golden Gate Wingmen.  (They knew who their demographic was for sure!)

The Hamilton's Closed Circuit Broadcast included a very welcoming backdrop for fans of the Golden Gate Wingmen.  (They knew who their demographic was for sure!)

As the Golden Gate Wingmen started into “Cassidy” toward the end of the first set on Wednesday night, March 21, 2018,  at The Hamilton, I thought it would be a fun cover song. But I quickly realized this would be a departure from the song I named my daughter after. This version of "Cassidy" captures the essence of this band—you may expect to hear a Dead cover band, but you discover joyously, while the band is discovering it as well, that you’re hearing all four guys’ experiences coming together to create a new and different style. Their music is often Dead-like, but it’s certainly not like any act you’ve heard play with the members of the Dead.

On a day when almost the entire city of Washington shut down because of an early Spring snowstorm, the Golden Gate Wingmen stuck to their plans to open their tour to a crowd of appreciative fans. The Hamilton was much more crowded than many of us expected, but the weather wasn’t going to stop people from getting down with these guys. Guitarist John Kadlecik led the charge, along with Jeff Chimenti on keys, Reed Mathis on bass and Jay Lane on drums. We actually got a chance to talk with the band before the show, and we’ve included a bit of that interview below with a clip from the “Cassidy” jam. The whole show is available below, and the interview we did will be featured on an upcoming episode of the Brokedown Podcast. You can listen to a small clip of the interview at the bottom of this article.

These guys aren’t wingmen at all, in the traditional sense, but really are leaders of their craft coming together to create brand new music that they don’t get anywhere else. They mix in some non-Dead music as well, like Bob Dylan’s “It Takes a Lot to Laugh, It Takes a Train To Cry” and “Ring Them Bells.” The second set featured covers of George Harrison, The Who, and John Lennon. These covers help, in a way, to keep them away from just playing the Dead, which helps to keep the perspective on their music, not the band they’re all best known for covering. Jeff Chimenti played masterfully on the keys the entire evening.

Jeff Chimenti played masterfully on the keys the entire evening.

But there were plenty of Dead songs as well. The “Masterpiece” had a pure Jerry Garcia tone, but John K’s signature voice and feel. The set closing “Ripple” had a reggae vibe that combined Reed Mathis’s octave-bending effects with Jeff’s bluesy piano. As they said in our interview, they like having the freedom to kick back, take chances and explore—and this set was a great example of this in action.

The second set opened with a nice, long, bluesy “Sugaree,” with Jay Lane always being responsive and attuned to the changes in tempo and direction. Reed Mathis led the way on “Queen Jane Approximately,” which was made better by the combination of his voice and effects through his guitar amp, bending one’s impression of what can be done with a bass guitar. Jay Layne was smiling ear to ear the entire night.

Jay Layne was smiling ear to ear the entire night.

The highlight of the second set was a classic “Help On the Way > Slipknot,” but I don’t think anyone expected the “Wharf Rat” that came out of the jam. This version was soulful and included the important things about that song, but included a lot of originality as well. Jeff Chimenti’s haunting keys on this song helped remind the crowd of the heaviness of the original intention, and John’s soloing was spot on. Reed Mathis did double duty on the bass, vocals and additional duty if you count the guitar active bass solos.

Reed Mathis did double duty on the bass, vocals and additional duty if you count the guitar active bass solos.

The second set closed with a rocking “Touch of Grey,” which was probably the song most closely played like the original. If they keep playing together, we will get by, indeed.

Audio clip from the upcoming episode of Brokedown Podcast. Listen to the entire interview on the Brokedown Podcast Episode 017 - Golden Gate Wingmen.

Click here to see the setlist for Golden Gate Wingmen's performance at The Hamilton on March 21, 2018.

1. It Takes a Lot to Laugh, It Takes a Train To Cry (Bob Dylan cover) (John Kadlecik vocals)

3. When I Paint My Masterpiece (John Kadlecik vocals)

6. We Can Run (John Kadlecik vocals)

1. Join Together (The Who cover)

All Songs are Grateful Dead Unless Otherwise Noted

Previous Performances by Golden Gate Wingmen at The Hamilton