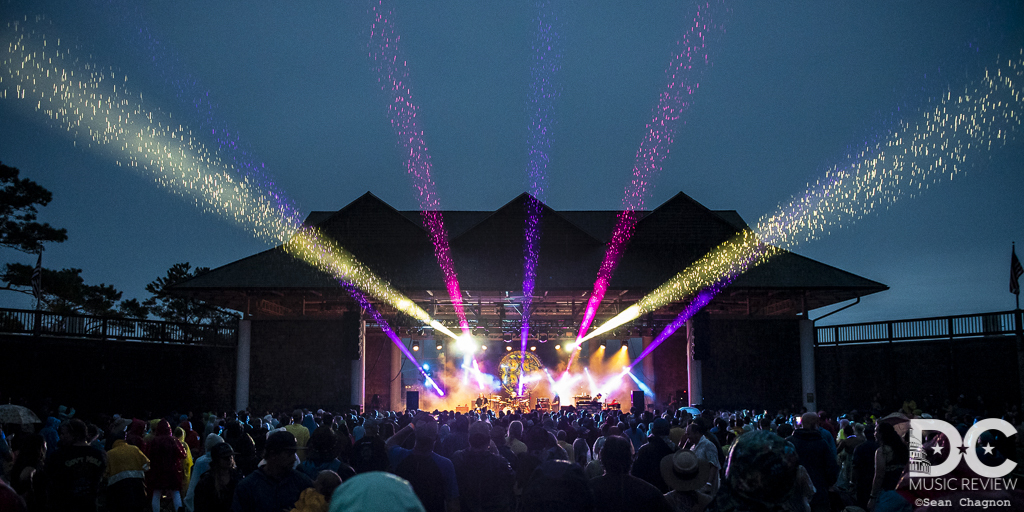 The Outer Banks of North Carolina is a gem of a place that has an incredible amount of things to do in the summer. With miles of beaches, top notch fishing, and parks such as Jockey’s Ridge and the Wright brothers Memorial there’s no shortage of entertainment for tourists. For the locals, avoiding the zoo that is tourist season can be tricky, but Mike Dianna of Bearded Face Productions had just the cure for them this night. Clouds had been looming throughout the afternoon threatening to spoil the fun, but as the day went on, it looked to be more and more promising. Mike Dianna is no stranger to inclement weather and was doing everything he could in his power in preparation to remove obstacles that might put brakes on the show. His Mustang Music Festival has gone head to head with hurricanes, so a little rain was not going to stop him now. And luckily for this audience, Roanoke Island, the home of the Lost Colony, was about to get rocked by legends Gov’t Mule. The Record Company started the night off with an in your face set of blues infused rock’n’roll that shook the ground from the start. The Grammy nominated band has been quickly gaining notoriety among music fans with an approach that keeps fans coming back for more: simplicity. Their no frills approach to music is a refreshing throwback in the current electronic and autotuned musical environment. The trio consists of a driving rhythm section made up of Marc Cazorla and Alex Stiff on drums and bass respectively and Chris Vos filling out the sound on vocals, harmonica, guitar, lap steel, and pedal steel. The guys hit high points from their 2016 debut album Give It Back to You and their latest effort All of This Life. The energy The Record Company brings to the stage was an appropriate way to spin the crowd up for the party that was about to happen. The weathermen had promised rain that afternoon, and once again they were wrong. Unfortunately, their prediction was incorrect for the time only. As the stage was being set, the drizzle began and started to pick up slowly. Rock veterans Gov’t Mule were undeterred by the precipitation, and the show went on. Despite the soggy conditions, the crowd stuck around, because these fans are…stubborn as mules. Warren Haynes and company recognized the dedication and the crowd was generously rewarded for their vigilance. Mule played one incredibly long set of heaters that kept the crowd from going anywhere. They came out swinging with the opening track off Shout!, World Boss, and never let up. Lay Your Burden Down journeyed off into Smokestack Lightning before rolling back into and ending the song. Wandering Child, Forsaken Savior, and Doing It to Death were predecessors to an awesome cover of Steppenwolf’s Don’t Step on the Grass, Sam. Mule encouraged crowd participation with one of their team coming out with cue cards containing the chorus’s lyrics to ensure everyone could participate in the sing-a-long. What was to be the set one closer, Soulshine, was up next and really hit home with the lights beaming through the pouring rain. A passionate cover of the Allman Brothers Dreams followed to the crowd delight. They plowed on through to a Trane > Eternity’s Breath > St. Stephen Jam and at this point, no amount of rain was stopping the Mule train from traversing the tracks. Larger Than Life was segued into Jimi Hendrix’s If 6 Was 9 before finishing that out, and they closed with the set signature Mule that included a Getaway/Jungle Boogie tease.

The encore was another present from the blues gods that consisted of three songs mashed into one: Come on into My Kitchen > Gonna Send You Back to Georgia > Mean Mistreatin’ Mama > Gonna Send You Back to Georgia. The crowd didn’t falter throughout the show and their patience was rewarded with sincere gratitude from the band and a phenominal night of music. Purchase the performance at Nugs.net