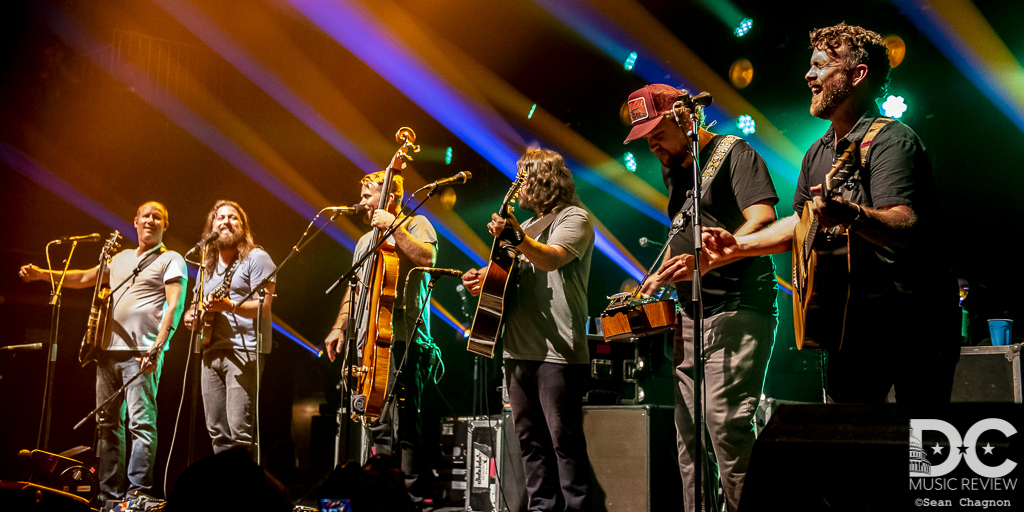 Wednesday nights for the average person are reserved for a celebration of being done with 60% of the workweek and maybe hitting a wing Wednesday and grabbing a couple beers before calling it a night. Attendees of the Greensky Bluegrass show at The NorVa, in Norfolk, Virginia, that were expecting a mellow night got anything but that. With the Jon Stickley Trio opening up for them, it was already guaranteed to be a night of fantastic music, but the bands had some tricks up their sleeves and turned the night into an absolute rager.

Instrumental band Jon Stickley Trio started the night off with a bang. What they lack in lyrics is made up ten-fold in raw musical talent. Stickley, a master of the acoustic guitar, never fails to dazzle audiences with his lightning fast flat picking. When not shredding, he holds down rhythm and Lyndsay Pruett takes over on violin with beautiful melodies that can tame even the most savage musical beasts. All the while, classically trained drummer, Hunter Deacon, keeps the beat as accurately as a metronome, and never misses any of the time changes or stops and starts in the trio’s intricately written songs. Greensky Bluegrass took the stage after just playing two insane nights of music at the 4848’ Music Festival in Snowshoe, West Virginia the previous weekend. With those sets being so wild, many were expecting a night that was slightly more subdued, but GSBG had a “Casual Wednesday” in store for Norfolk. The first set started with “Grow Bananas” and guitarists Dave Bruzza’s “A Letter to Seymour.” At this point, Anders Beck set down his dobro to not only announce this was Casual Wednesday, but to also introduce the band and let everyone know banjo player Michael Bont’s birthday was only a couple hours away. They rolled into a jammed out “Kerosene” and hit fan favorites “Hand Guns” and “Past My Prime” before closing the set out with “Light Up of leave Me Alone.” Set two was an absolute scorcher. It started off with “Cold Feet” and the title track from their newest release “All for the Money” before bringing Lyndsay Pruett out for a 17 minute “Freeborn Man.” After hitting a couple more songs from the new album, Jon Stickley joined them onstage for an absolutely wild finish to the set which started with a twist on Eddie Money’s song to change it to “Two Stickleys to Paradise.” The remainder of the set weaved in and out of that and “Broke Mountain Breakdown” with a midnight singing of “Happy Birthday” to Michael Bont in the middle. The encore just ratched up the fun with a 15 minute reggae style medley of the entire show with Stickley and J.J. Cale’s “After Midnight” bringing the show to a close.

Once again GSBG exceeded all expectations and laid it out there for their fans. It’s safe to say that some folks in the crowd now hold Wednesday as their favorite day of the week!

Please join us in wishing our own @bontzilla a very Happy Birthday today!

Great times were had last night at @TheNorVa! Thanks to our dear friends @jonstickleytrio for joining us and to all of you for packing the house! #SummerTour continues tonight at @greenfieldamp in Wilmington, NC (#SOLD OUT) - doors at 5pm and show at 6pm.

Click here to see the setlist for Greensky Bluegrass's  performance at The NorVa  on July 17, 2019 Click to purchase Greensky Bluegrass' Soundboard Recording from this concert