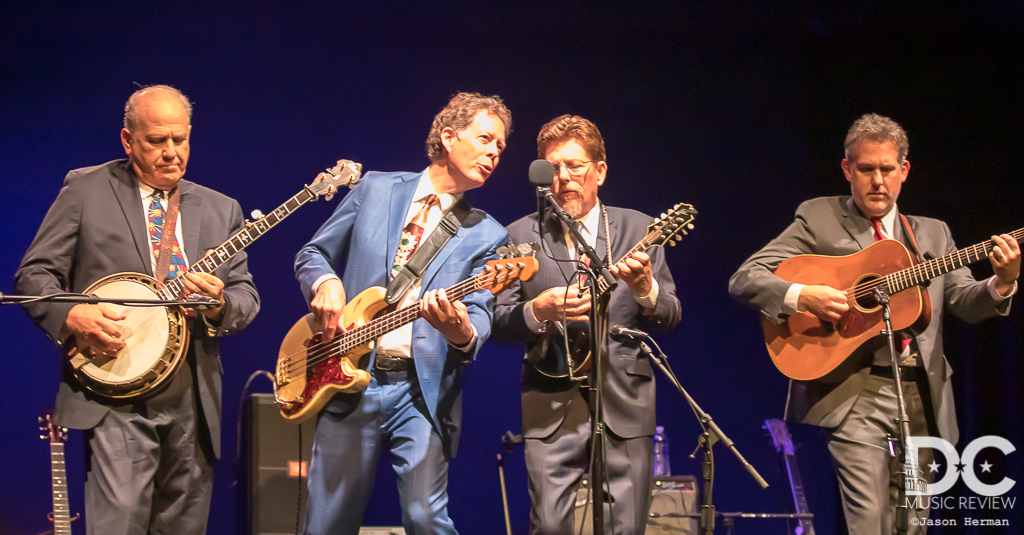 ​A week full of bluegrass finished out at The Barns on Saturday, November 17 with some folks that have been doing it for quite some time, Hot Rize.  Celebrating their 40th year together as a band, the group decided to make the journey back to The Barns at Wolftrap in honor of the note worthy accomplishment.   The foursome, composed of mandolin and fiddle player Tim O'Brien, Mr. Banjo himself, Pete Wernick, Bryan Sutton on guitar and Nick Forster on bass guitar.   Along for the fun was also Red Knuckles and The Trailblazers that played a short set and kept the audience entertained for certain.

The Barns is a ​much smaller venue than its counterpart The Filene ​Center, it was an intimate night that was shared between artist and audience.   Seating just under 300 ​proved to be the perfect setting for all of the interacting that the band was doing with fans young and old, who about more than half had seen Hot Rize before.  Nick Forster welcomed the audience and told us a history of the band as well as what they've been up to lately.  Between each song he took a moment to really let the audience know how much they have enjoyed their forty years and how appreciative they are to be able to still do what they love. Over the summer, to celebrated their 40th anniversary, the band got together at Boulder Theater in Colorado to play a three night run full of guest appearances and bluegrass magic.  The shows resulted in a recorded live album as well, and now out on the road again, they continue to play traditional bluegrass music much to the delight of the old school fans who might not enjoy the jamgrass scene ​that has thrived as of late.   The band played quite a few hits that can be found on the album but also took shouted out songs requests from the audience at one point.  One particular request was a personal favorite that has been sung by everyone from Elvis Presley to Bill Monroe and Greensky Bluegrass "Working on a Building".  Fans seemed to appreciate being able to hear songs that they were able to request as well as ones the band already had on the setlist such as "Blue Night" and "Western Skies".

After 40 years, it sounds as though they have never missed a beat, and have aged as individual musicians and a group with grace and stamina.  Each individual member of the band has done so much with their individual musical passions, from winning awards, to a podcast that reaches thousands and performing with countless other musicians​, that not a minute of their time has been wasted.  The one-mic, vocal harmonization and sound of each individual instrument that is able to be singled out is something that is harder to come by these days.  The gentlemen from Hot Rize can be considered experts in that manner of musicianship - truly something thrilling to see live, especially in such a small setting.

A true delight, which I was completely unaware of was their alter-ego band, The Trailblazers, coming out and playing the 40's and 50's style of country music that they say they learned from listening to the same jukebox all their life at the Eat Cafe in Wyoming, Montana.  With coordinated guitar swinging, hilarious outfits and comical banter, they truly made the audience laugh out loud while stomping their feet along to the music. The Barns is a seated venue and it seems to foster a more intimate connection between artist and audience as there is no dancing and not much talking.  It seems to take the route of when going to concerts was less of a social party experience and a chance to actually listen to the music and pay attention to the performances.  This was my first experience at the venue and I thought it was perfection.  Beautiful, intimate and wonderful acoustics allowed for a concert experience that I have never been able to have before.

Be sure to check out the photo gallery of both bands as well as the interview with bass guitar player Nick Forster that we did prior to the show here.

Hot Rize Celebrates 40 Years Together
Read More
About the author