Houndmouth Delights In Charm City With A No Frills Performance 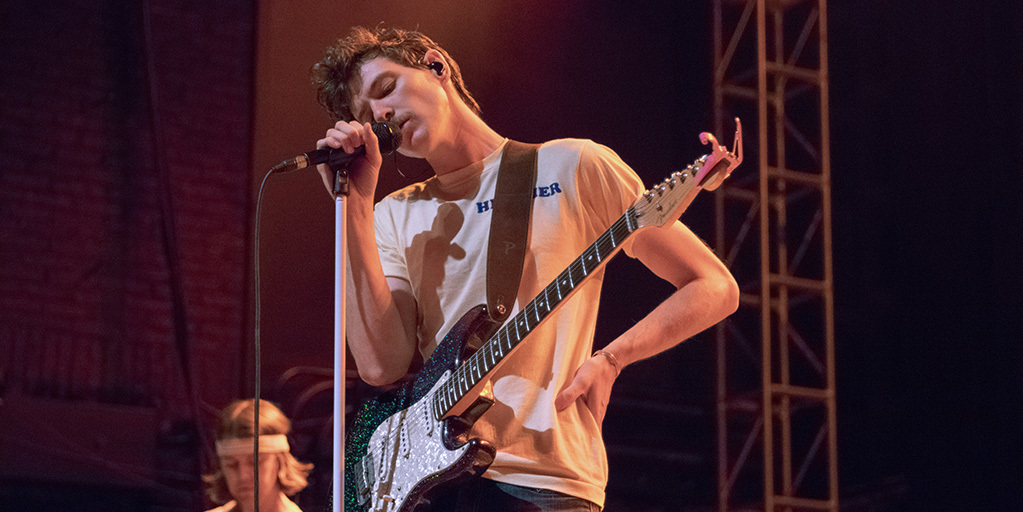 The unforgiving humidity smacked the citizens of Baltimore, MD right in the face on Saturday, June 16th. But inside of Rams Head Live!, the air was filled with far less moisture, and far more excitement. Primed by the energetic shredding of Liz Cooper & The Stampede, the members of Houndmouth took to the stage  enveloped in a chorus of cheers. Composed of Indiana natives Matt Myers (guitar, vocals), Zak Appleby (bass, vocals), and Shane Cody (drums, vocals), Houndmouth truly understands the power of "less is more".  Accompanied by four additional band members, who play a variety of instruments ranging from the saxophone to drum machines, the band jumped straight into their opening number. It was clear that this would be an evening focused on good music, not frills and shiny objects.

The Charm City crowd needed no convincing; With grins resembling that of the Cheshire cat, the audience belted along to an eclectic mix of songs. Flowing from their latest synth heavy single, "This Party" to their beloved indie hit, "Sedona", the band artfully blended together their distinctly different sounds, never losing the crowd. With the majority of the band exiting the stage for what is typically the time a band would tease an encore, frontman Matt Myers softly explained,

“We’re not going to do the thing where we leave and then come back out...I’m just gonna play you some more songs”.

It is perhaps this blatant disregard for the norm that makes Houndmouth stand out from other bands under the indie rock umbrella and keeps their fanbase loyal as they continue to evolve sonically. Follow Houndmouth's melodic journey by listening to their  their third full length album, Golden Age, which releases August 3rd.