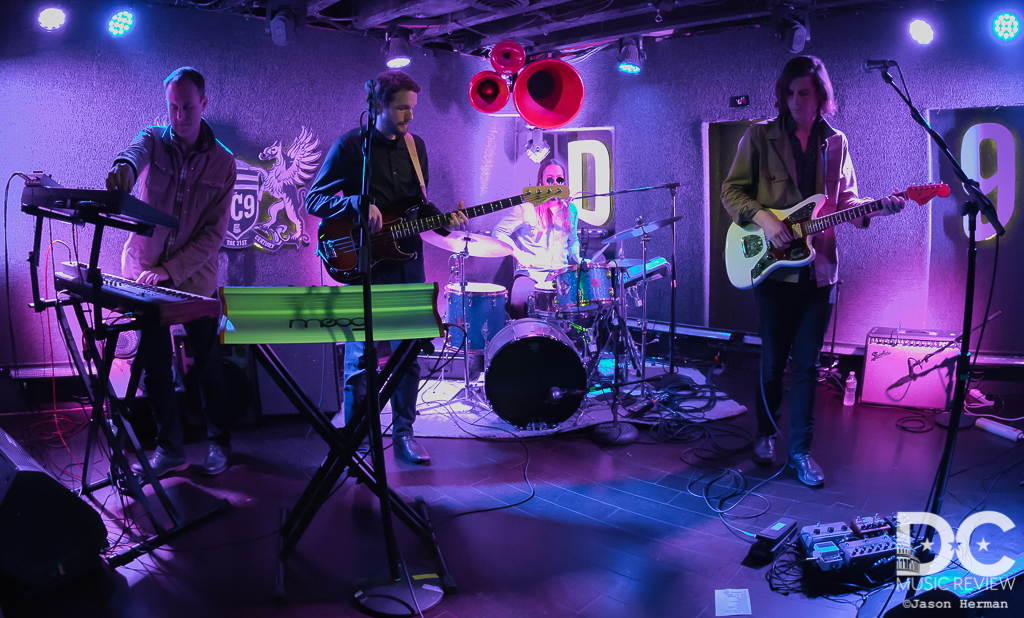 Erik Hall, or as he is better known — In Tall Buildings  — is a suave and innovative musical wizard. His late March performance at DC9 was an early stop on his 2018 promotional tour. Standing tall, he casted a serene aura over the intimate crowd, despite the intermittently intense drums and ethereal mixing. “Siren Song,” a track off Hall’s latest release started off the set, with “Beginning To Fade” not too far behind. Both songs were shining examples of the range of In Tall Buildings. In addition to soaring vocals and wild range, the variety of sounds experienced in just one track was amazing.

The Chicago based group are on tour for Hall's latest release Akinetic, a multi-dimensional musical experience that showcases numerous layers of sounds and tones. The album requires numerous listens, as the sounds and melodies only become richer and more prominent with more exposure. For some reason, those sounds that make multiple listens a treat, came through in Hall’s live performance. Harmonies were striking, the soothing vocals setting the tone for the evening, indicating that even those with just slightest bit of interest in  Hall’s recorded content should not miss a live show.

If you couldn’t see the band, you’d assume Hall was backed by at least seven others. In actuality, there were just four, with at least half of the musicians doubling up on instruments. Hall was joined onstage by Quin Kirchner (drums), Stacy Harden (bass, synth), and Justin Walter (keys). The wide range of sounds was almost baffling.

While at times In Tall Buildings’s sound had elements that were reminiscent of The Shins, their sound was totally modern and unique. They were both quiet and powerful, lulling you into a sense of comfort and intrigue all at once.

Toward the end of the set, Hall gratefully acknowledged the crowd, saying, “It means the world to me that you’re all here. What a lovely group of people.”

DC9 was not Hall’s first trip to the District, and his knowledge of the Capital’s hot spots rolled off his tongue as though he were a DMV native. While he was chatting with the small but rambunctious crowd, Hall mentioned that they arrived to DC too late to partake in their favorite tourist attractions. Most remorseful of all, he said: “We didn’t get to go to Ben’s Chili Bowl.” However, on a positive note, Hall repeatedly said “see you soon” throughout the night, perhaps indicating that he will return to DC soon for a reprise performance (and a bowl of chili).

Hall’s performance looked effortless and felt masterful, with the artist embellishing each song with a soft smile at its conclusion. Hall seemed  as though he were raised on the stage, his performance coming off as though it were second nature.

As the band was inching off the stage, one brave fan called out, “ONE MORE SONG!” to which Hall delightedly relented, with a nonchalant, “Alright, yeah!” The band closed out with “Monster’s Lair,” and a sweet comment on how nice it felt to travel and “feel the love” wherever they went.

If you’re looking for a musical experience that engages your ears as well as your mind, then make sure to check out In Tall Buildings. We hope to host him soon again in the DMV.

Click here to see the setlist for In Tall Buildings' performance at DC9 Nightclub on Mar. 28, 2018