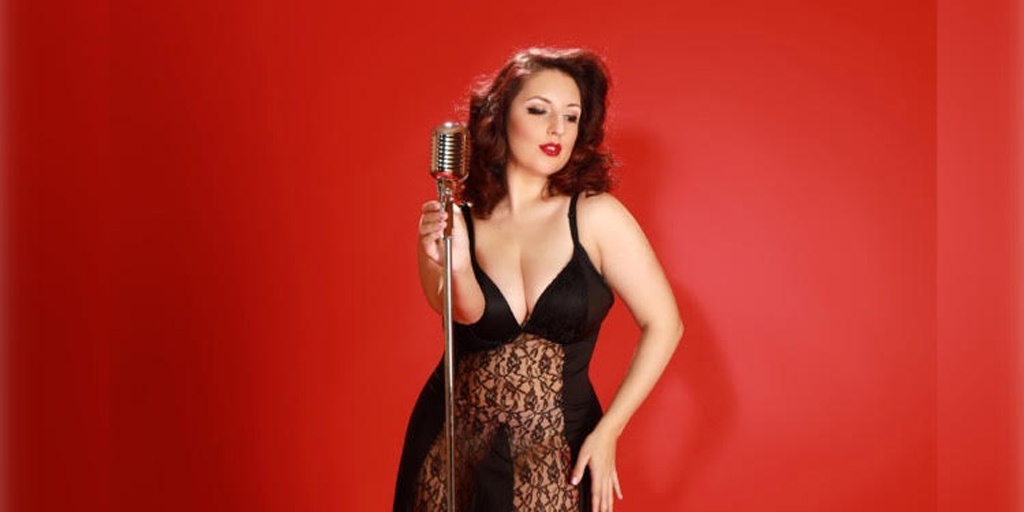 With the show just around the corner, DC Music Review is talking to some of the women/bands who will be performing front and center at the show.  Our next interview is with the multi-dimensional, extremely talented Jenny Langer (aka Black Betty) who I recently saw perform with The Ron Holloway Band at an afterparty at The Hamilton. I was mesmerized, stunned, totally blown away by her talent, her presence, her insane pipes, and her ability to connect with every person in the audience.

DCMR: Hi Jenny! Thank you so much for taking the time to do this interview. I've seen you play and am so curious about your story. Tell me a little bit about you.

Black Betty: My name is Jenny Langer, but most folks in the DC music scene call me Black Betty.  I’m the lead singer of Moonshine Society (blues) and a member of The Ron Holloway Band (funk).  I’m also a neo-pinup model.

DCMR: You are so dynamic on stage, I was so excited to see you perform at the Tedeschi Trucks Band afterparty at The Hamilton a few months ago with The Ron Holloway Band. You all blew it out of the water! What's coming up for you musically?

Black Betty: Moonshine Society will start recording our second album this July at Suckerpunch Studios in Bethesda, MD and we are inviting fans and friends to get involved by visiting moonshinesociety.com.  We’ll be playing the Silver Spring Blues Festival on June 16 and have a special show at the Old Town Bowie Grille on June 8 with Anthony “Swamp Dog” Clark.

And The Ron Holloway Band will be opening for Samantha Fish at The Hamilton on June 6 and touring later in June. DCMR: You have a lot of exciting things coming up! Samantha Fish is incredible. Speaking of incredible women, let’s talk about female empowerment in music. What’s being done to support women in music and what can be done better, in your opinion?

Black Betty: I see more women than ever coming together to share knowledge, tips, and services in the industry with each other.  A handful of magazines, blogs, conferences, and social media groups are now solely focused on this.  These are great resources for young, new female musicians just getting starting and for some of the pros, too.

What can be done better?  How long we got?

I’ll just pick a public one for now: Festival lineups are still dominated by male artists.  Major festivals have come under scrutiny because of this, for example, Coachella this past year. There’s not a lack of female artists, so I don’t buy that reasoning for a second.  It starts with the buyers and bookers.  Inclusiveness and diversity in major event lineups needs to be a conscious decision. DCMR: I couldn't agree with you more. Let's pivot to talk about DC specifically. How do you think the DC music scene/community is changing?

Black Betty: Fewer roots venues are operating, especially in the blues scene, where a lot of my stage time resides.  It’s been sad to say goodbye to Zoo Bar, Bangkok Blues, The Surf Club, and more great venues.  That said, newer venues booking a range of music are embracing the younger generation of blues artists, places like Pearl Street Warehouse, The Soundry, The Hamilton, Gypsy Sally’s, and others. And it’s for that reason it’s an exciting time to be a young, roots artist in DC.

DCMR: So with the Radiohead tribute + Planned Parenthood benefit concert, there is a great mix of artists participating. Here's the tough question: Which artist are you most excited to see perform at this show?

Black Betty: DON’T make me choose!!!  I will say that it’s refreshing to see so many women in the cast of performers.  Our industry is male dominated, so to have this many badass women together for one night is RARE.  This is the fucking unicorn show of 2018.

DCMR: I love that! It should be the tag line for the show. Because it truly is unique in so many ways, especially having so many INCREDIBLE women headlining. And that it is supporting the local Planned Parenthood is also a rare gift. What are you thoughts on that, specifically?

As major cities grow, more and more residents need access to affordable health care. What’s often available to most young people, part-time workers, families with single incomes, and others in need is not realistically affordable.  We need clinics like local Planned Parenthoods to close that gap when major doctor’s offices and hospitals are not an option. DCMR: What are you most excited about as you're getting ready for June 2nd?

Black Betty: It’s always exciting to collaborate with other artists for the first time.  There’s a particular energy -- a combination of excitement, curiosity, and nervousness -- that usually surrounds “the first time.”  It’s part of the fun, like taking a new lover.  That energy is what I’m most excited about (wink).

DCMR: Well, that's an amazing way to put it. And this has been an incredibly fun interview! Anything else you want to say?

Black Betty: Get your tickets early!  It’s an amazing lineup for an amazing cause and there’s a lot of chatter about the show right now.  I wouldn’t be surprised if Saturday sells out.

DCMR: Thank you so much for taking the time to talk with us! We can’t wait to see you perform on June 2 at Black Cat!

To learn more about Black Betty please check out her Facebook page.