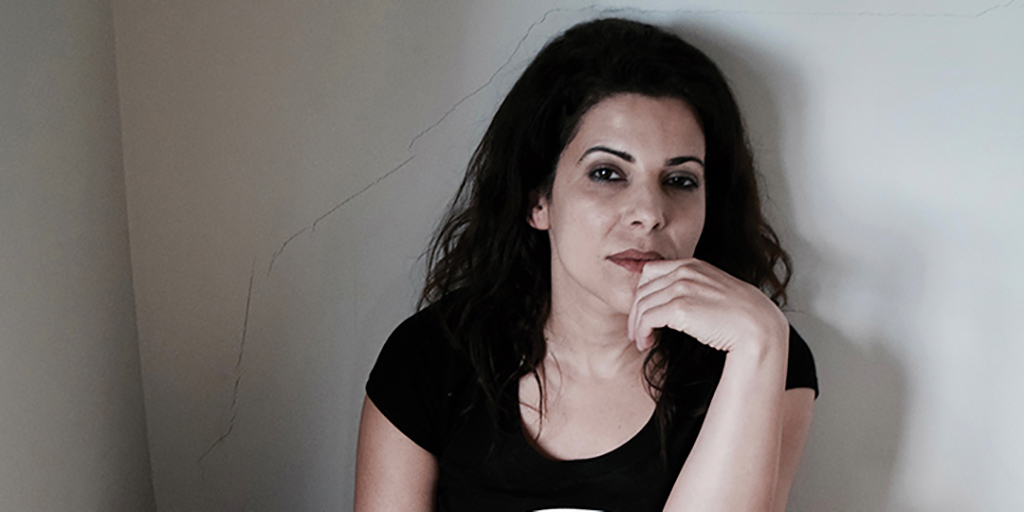 With the show just around the corner, DC Music Review is talking to some of the women/bands who will be performing front and center at the show.  Our next interview is with the dynamic and passionate artist Lisa Said of Piramid Scheme, a gutsy and powerful rock band, featuring a quartet of veteran musicians (Atta Girl, Lisa Said, Pigeon Kings, The Grey A). They deliver rhythmically loaded, hook-laden songs, blending elements of garage, prog, pop and glam rock.

DCMR: Hi Lisa! Thank you so much for taking the time to do this interview. Tell me a little bit about you.

Lisa: Thanks so much for this interview! So me, I’m a little bit country, mostly rock n’ roll these days, though I’ve played many different styles in a bunch of diverse bands. I’d been playing around town for the last three years as a solo artist -- playing mostly wailing, folk-country tunes with Andrew Toy on drums and other accompaniment like violin or mandolin.

Last fall, I met and started playing with Darrien Day, and we started Piramid Scheme together with Andrew Toy and Howard Rabach. We play rock n’ roll with garage, pop, glam, and prog influences.

When I moved to D.C. in 2007 from Asheville NC, I met some like minds and began playing bass in a metal-rock band Sister Ex. I then took a long hiatus from playing until I decided to record my solo album 4 years ago of songs spanning 12 years.

DCMR: I love your sound, you pull from so many varied genres and offer back something new and unique. I'm excited to hear about what's coming up next for you musically?

Lisa: Thank you! My band Piramid Scheme just released our debut E.P. Get Rick Quick Too in late April which we are really excited about. And we have some good shows lined up. On June 18 we are playing Galaxy Hut with Don Zientara and then playing a show with Honey Kill, Bad Robot Jones, and The Feed at Villain & Saint on July 19. I’ll also be playing a solo set at Black Cat on July 1 with The Tins from Buffalo, NY.

DCMR: You have a lot coming up, I will definitely get out to see you play! Tell me, how did you/your band get involved in this Radiohead Tribute show?

Lisa: I was asked to be in it, and I was delighted to do it since Radiohead/Thom Yorke is a big inspiration.

DCMR: For me, too. Talk about iconic. Do you remember the first time you heard Radiohead?

Lisa: I remember hearing and singing along to "Creep" on the radio, but I wasn’t hooked until the album OK Computer came out. I became so obsessed—I played that album over and over, sometimes I just went to sleep with it on loop. Then I listened to The Bends obsessively and then going into Pablo Honey. I bought Kid A at a record store in the East Village the day it was released. Funny thing to remember—it might’ve been the only album I bought in person on the day of release. DCMR:  I love that. It seems like a lot of people have a Radiohead story that is pinned to a very specific time and place. Yours is very rock and roll! So let’s talk a little bit about female empowerment in music. What’s being done to support women in music and what can be done better?

Lisa:  Sigh. It’s complicated. I’ve a long history with it, first as a bandmate, then as a songwriter and producer. I try to address it at the individual level. I only work with people who are supportive to me as a creative collaborator, and I refuse to work with people who steamroll me as an artist or woman.

I’ve gotten to the point that I can surround myself with the best musicians I can who are never condescending, always honest and constructive. My current bandmates and collaborators are some of the greatest feminist allies, and so are other musicians and collaborators I’ve worked with — anywhere from where I record to where I get my gear. So many people— men and women— have helped me in this process…it’s really taken a village.

Not sure what else we can do as artists except work with the people that support us artistically, play the best we can, and support each other’s releases and shows— regardless of gender. DCMR:  I feel like that sentiment is shared by a lot of artists I'm talking with. Thank you so much for verbalizing that. Let's pivot to the D.C. scene. What changes do you see happening in our music community?

Lisa: I’ve been on the outskirts and newbie to the scene, so it’s hard for me to say.  I’d like to think D.C. artists are banning together and supporting each other more. I feel great vibes from this community, though it’s not easy to be an artist in D.C., or America, for that matter. Most of us are hustling with other jobs, doing what we love as much as we can, and trying to book the same venues and get a decent crowd to our shows.

Not sure how much has changed for other folks — if it’s gotten harder or stayed the same with the usual DMV hassles or if it’s a more local DIY artist versus corporate issue. In any case, this past year, I found a home and support network here so I feel more comfortable in it. I know I’m very lucky in many regards… hashtag blessed.

DCMR: I couldn't agree more. The community here is varied and I know only a sliver of it, but that sliver is very welcoming and supportive. And this Radiohead tribute show is featuring so many people from the DMV music scene. So here is the hard question: ​Which artist are you most excited to see perform?

Lisa:  All of them! Everyone is such a great talent, I’m excited to hear how they perform these songs. I was blown away at rehearsal hearing Beth Cannon and Tula Pisano sing together.  And the band, the core band is great so I’m just excited to be a part of it.

DCMR: Yes! The line-up is incredible and it sounds like a lot of work has gone into preparing for the show. What has the rehearsal process has been like for you?

Lisa: It’s been amazing to play with a different and very talented band and to meet different folks for the first time.

DCMR: It's a special kind of show, also in that it is supporting the local Planned Parenthood. Do you want to speak to that a bit?

The cause is so important for awareness and support. Over the past couple of years on social media, I realized how many educated people are really misguided about Planned Parenthood’s services. I used to go to Planned Parenthood in Asheville, NC when I lived there and didn’t have a gynecologist. So if it’s any indication, I’ve never been pregnant and used their services — it’s for anybody and everybody. It’s even there for straight men, especially straight men who don’t want to deal with consequences.

The sooner we all realize it’s for everybody’s benefit in this nation and stop fighting internally, the better off we’ll be. I read somewhere recently that in Egypt, where my family is from, they are enforcing a law that restricts individuals from purchasing contraception in pharmacies without a marriage certificate. It’s crazy. And ironically, religious conservatives in the U.S. are trying to do similar things here as they are doing in some Arab countries — trying to control contraception or planning resources and sex education. It’s sad and ironic — evangelicals in the U.S. are more similar to the Muslim Brotherhood & friends than they realize. It’s all about control and power, nothing about true religion or spirituality, and women are the first people to suffer the consequences. DCMR: The organizers of this show are very passionate about this cause, too. It's incredible to bring so many people together to raise awareness and give all proceeds to Planned Parenthood of Metropolitan Washington, D.C.  What are you most excited about as you're getting ready for June 2nd?

Lisa: Getting to be in the same room with amazing local artists and music lovers.

DCMR: YES! I can't wait, either. And can't wait to see you perform! Anything last things you'd like to add?

Lisa: Thanks to D.C. Music Download for sponsoring this, Staycation for organizing it, and to Black Cat for having us local artists perform there. It’s a treat!

DCMR: Thank you so much for taking the time to talk with us! We can’t wait to see you perform on June 2 at Black Cat!

To learn more about Piramid Scheme please check out their Facebook page.