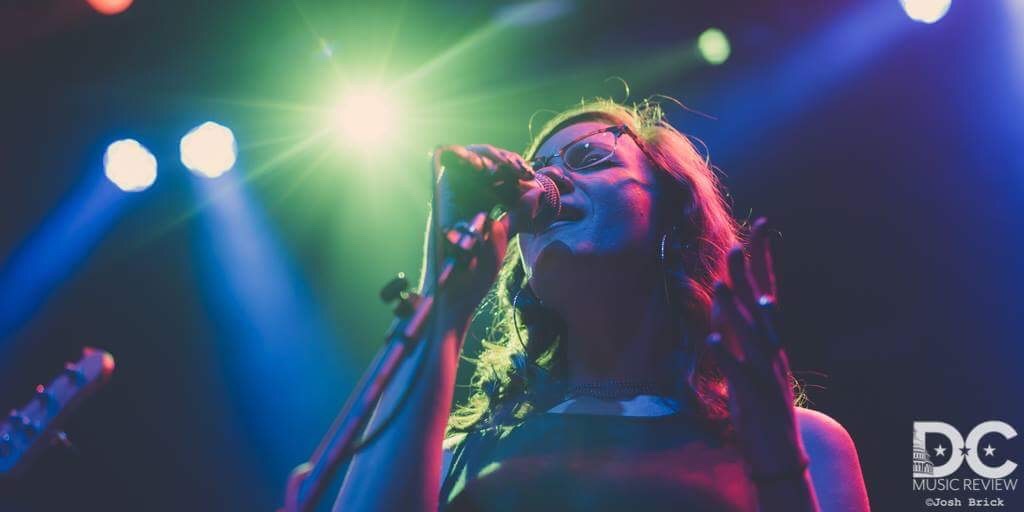 With the show just around the corner, DC Music Review is talking to some of the women/bands who will be performing front and center at the show.  Our next interview is with Tula Pisano who has a voice that is beckoning and a musical sensibility that is jazzy, enchanting, and positively beguiling. DCMR: Hi Tula! Thank you so much for taking the time to do this interview. I know you're involved with Staycation, the amazing band that is organizing this event, and I know you're also involved in many other musical projects. Tell us about them and more about you!

Tula: Thank you so much for talking with me! So about me, my background is jazz, but I like to sing a little bit of everything, usually with a jazz twist. I've been playing mostly solo or as an acoustic duo with a guitar player (Brian Raubacher - he's awesome) for years, but more recently have been joining local bands like Moogatu and Staycation as a special guest, which has been a blast! I have a new project coming out shortly - a band called "novo" with Gena Photiadis on keys, TJ Turqman on bass, Nikhel Sus on guitar, and Matt Treadwell on drums. Super excited for this - stay tuned!

DCMR: I've heard about novo and your first show coming up. When is that and what else do you have coming up?

Tula: I've been working on a ton of stuff with novo and our first show is at Marvin in DC on 6/18. I'll also be joining Staycation and my friend Brett Whitson for a few shows this summer so keep an eye out for all of that!

DCMR:  We definitely will! So this concert is a tribute to Radiohead and we have to ask: do you remember the first time you heard Radiohead? When was it and what song?

Tula: I remember being both confused and fascinated by Karma Police in that the lyrics are a little out there, but the melody was so pretty and catchy. Then I saw the video and was like whaaat?   I loved that they are so strange, with a perfect mix of heavy sounds, beautiful melodies, all with an underlying air of sadness and nostalgia. The beautiful sadness. I think the song "Reckoner", which I'm lucky enough to sing on Saturday captures that perfectly.

(DCMR note: get a sneak peak of Tula's amazing vocals in the video clip above!)

DCMR: I love that song and can't wait to hear how it's interpreted on Saturday. I feel like that song, the whole show really, is going to be so powerful. Tell me what the rehearsal process has been like for you and for Staycation.

Tula: It's been BUSY! Learning these tunes has given me a newfound appreciation of Radiohead and how complex some of their songs are. The core band is so talented and all the guest vocalists that have been coming in have been crushing it! Also, shout out to Zack Be's dog, Misty, who is the welcoming committee and makes each practice even more enjoyable and floofy.

DCMR: I love having dogs at rehearsal. It'd be so cool if Misty was at the show to give floof to everyone performing. Ok, so here's the hard question: Which artist are you most excited to see perform at this show?

Tula:  All of them! Seriously.  Also, I was pretty stoked on Beth Cannon's vocals at rehearsal the other day. She blew my hair back haha - such power!

DCMR:  We just interviewed Beth and she completely blows the roof off, she is a powerful performer.

So as you well know, Staycation decided to give all proceeds from this show to Planned Parenthood of Metropolitan Washington. Let's talk about that.

Tula: It's so important. Regardless of where your political views lie, I find it hard to fathom not being aware of the benefits of a place liked Planned Parenthood. It provides sex education, and in some areas it is the only access women have to life-saving tests and screenings such as breast exams and regular paps. It literally saves lives.

DCMR: A lot of women we are interviewing have shared personal stories about how it has helped them and people they know. It feels as though this event is really honoring DC, supporting local artists and giving back to our local community.

So as the date approaches, what are you most excited about for this event?

Tula: The overall vibe of this whole event has been full of love and support so I can't wait to see it all come together. Personally, I'm excited to sing these songs, including one of my favorites by Radiohead (you'll have to come to see which!) and to see all these ridiculously talented humans perform.

DCMR: I couldn't agree more. The line-up is a wonderful and the buzz around this is really positive. Anything else you want to add?

Tula: Thanks to Nik and Stephanie for turning their brainchild into reality! It's gonna be a special evening and I'm so honored and humbled to be a part of it.

DCMR: I have a feeling it's going to be really special, too! Thank you so much for taking the time to connect with us. We can’t wait to see you perform on June 2 at Black Cat!