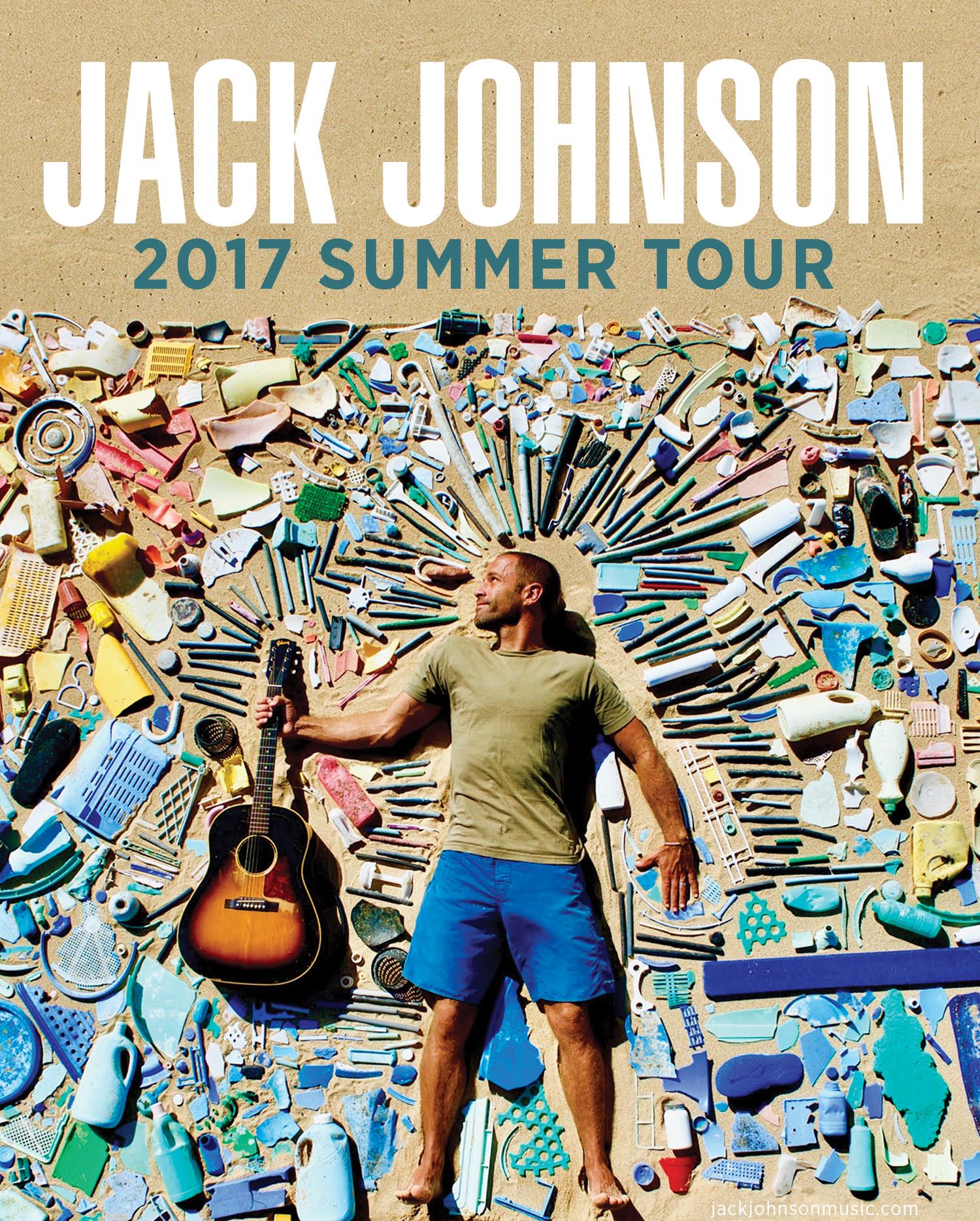 It has been three years since Jack Johnson performed at Merriweather Post Pavilion.

Tonight was a perfect night for a concert in Columbia, Maryland. The region was blessed with a beautiful, cloudless night, with very low humidity, a gentle and cooling breeze passing through the renovated facility.​

Jack Johnson and his band came on stage to the soothing music of Hawaiian legend, Israel ‘IZ’ Kamakawiwo’ole’s “Over the Rainbow.” As the lights rose upon the stage the audience was treated to a small stage with glass tiki torches behind it and a projections of palm trees projected onto the stage backdrop. Johnson transported the audience members to a small beach side encampment on a Hawaiian island where he and a few of his friends would perform for his friends in the audience. As the music began to play, mason jar-esq lights strung up overhead in the pavilion began to oscillate as an extension of the torches set up onstage and the same color lights were used to flooded lawn seats.The light show became an extension of the music and tenderness onstage that brought the entire audience under the shared canopy of his Hawaiian beach party.​

The Hawaii native introduced his friends onstage performing with him, Adam Tool (drums), Merlo Podlewski (bass), and multi-instrument Zach Gill (piano, accordion, melodica, and vibraphone). Jack set the tone that he and a few of his friends were just going to set up a small space under some tiki torches and play for us, his extended friends.​

The band performed one hit after another with very little pause or respite. The only time Jack would usually stop between songs was to acknowledge the loving adulation being directed toward the stage or to have playful banter with audience. At some points Jack would wish an audience member a happy 13th birthday or acknowledge a familiar face he knew in the audience.

Since Jack Johnson released Sing-A-Longs and Lullabies for the Film Curious George in 2006 he has seen his music shared between generations of his audience as parents have shared his songs with their children. Jack Johnson recognized and celebrated the family members that brought their families to see him before he played his hit "Upside Down" by announcing “This is for all of you that brought your kids tonight.”

A memorable moment occurred during “Brokedown” where the audience erupted in a passionate and loud sing-a-long to the lyrics. The audience was seemingly speaking from the heart, as so much daily uncertainty, daily news cycles, and the speed of the region.  People poured out their wish that they "need this here, old train to breakdown" for one just for one day. "cause time is just a melody/with all the people on the street," and people wanted a respite to the daily churn and rather concentrate on being in the moment with friends, family, and the beautiful music of Jack Johnson.​

The audience fully embraced Jack and his music that before the front-man began singing “Tomorrow Morning” the audience erupted in serenading Jack to his own lyrics which made him smile, laugh, and pause as he acknowledged the abundant love and affection that the audience was showing him.​

One of the most unexpected musical moments of the night came during “Bubble Toes” where Jack Johnson and keyboardist Zach Gill segued into Steve Miller’s “The Joker.”

Later during the night, as Jack might do on a small Hawaiian beach setting, he asked the audience to be very quiet so he could call out a unique call to his friend and his friend could respond in kind. The crowd grew hushed, Jack called out to his friend and seconds later a response came back and the light shone on his friend. This man was a longtime friend of Jack who taught him to play Ukulele.

Johnson also took time to show his love and respect to Washington, D.C.'s music scene. He talked about driving to high school one morning on Oahu and hearing Fugazi for the first time, and especially how he couldn't wait to come home and learn the chords to this legendary Washington, D.C. band. Jack’s guitar tech, friend, and close neighbor in Hawaii, Boogie Parlow, hails from Bowie, MD.

The encore consisted of four songs, with Jack Johnson kicked off the loving and affectionate farewell to those attending his small beach side gathering by playing a solo and acoustic “Do You Remember.” After that Jack welcomed his guitar tech Boogie on stage where they continued their fond farewell to the audience.

The headliners continued to fill the encore slot by bringing out out the opening act, Lake Street Dive, for an all-star jam. The palpable loving energy exuded from the stage as the band played Bob Dylan’s “I Shall Be Released.” As a finale, Jack performed “Better Together” which was a beautiful and loving way to end the evening, as friends, family, and loved ones encompassed each other with hugs, warm embraces, and tender moments.​

As the audience can attest to, we are all better together with Jack Johnson performing for us..

Click here to see the complete setlist from tonights performance

The Horizon Has been Defeated / Badfish

At or With Me

I Shall Be Released (Bob Dylan cover) (with Lake Street Dive)

Better Together (with Lake Street Dive)