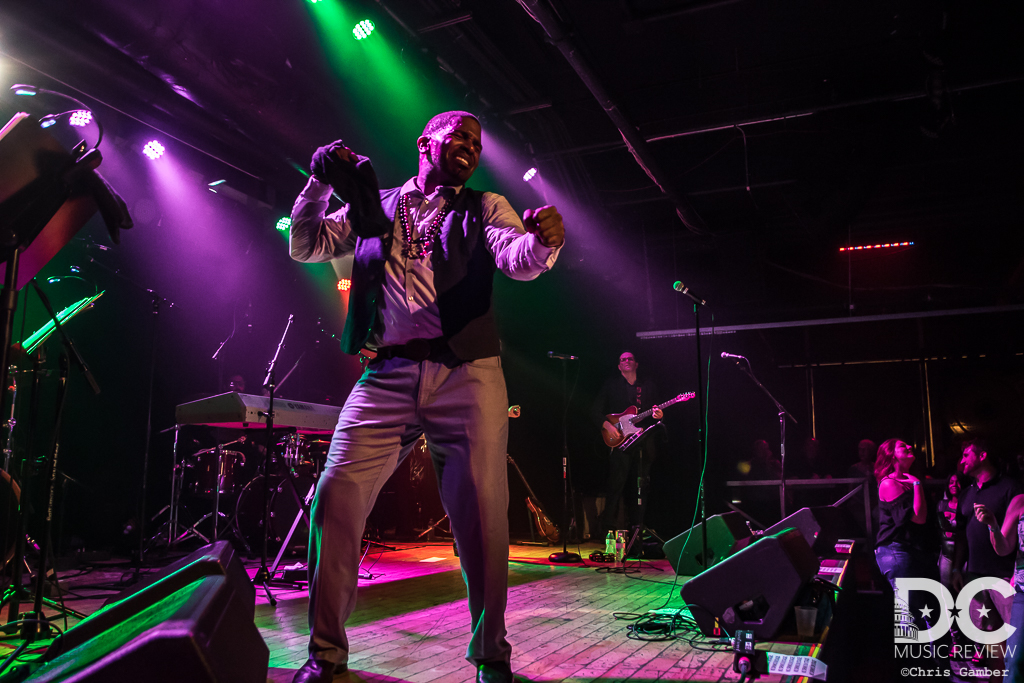 Saturday, April 14 was no ordinary evening in Baltimore City. Not only was there unseasonably warm 80-degree weather, but it was also the first night of Baltimore's well renowned Light City — the world’s first large-scale music, art, and innovation festival. Of course, other events were happening that evening, and I had the pleasure of attending the funkiest one in town: The James Brown Dance Party. The James Brown Dance Party isn't just any cover band show; they are a full-on tribute to the "Godfather of Soul" himself. With a rotating cast of musicians playing, no show is ever the same. Each musician brings their own special talent and style of funk to the stage, making every concert unique. Since their inception in 2015, James Brown Dance Party has included members of bands such as James Brown Band, Kool And The Gang, The Dap Kings, Sly And The Family Stone, Snarky Puppy, Trombone Shorty, Galactic, Trey Anastasio Band, Bootsy Collins Band,Lettuce, Big Gigantic, Odesza, Victor Wooten Band, Break Science, Pretty Lights Live Band, Tedeschi Trucks Band, John Legend Band, Talib Kweli Band, Turkuaz, Mumford And Sons, American Idol, and Dopapod. Every aspect of this performance was entertaining to the core, from the funky beats to the groovy moves by lead singer and keyboardist Chris Rob. The man knows how to get down, and he put every ounce of energy he had into his role in the group. His dancing and interactions with the audience were so fun and authentic that you couldn't help but smile in delight as you shook your “groove thing.”

Rest assured, this was no one-man show. Each performer did an exceptional job showcasing their individual talents. The overall outcome was phenomenal. From the first note to the very last, the band ignited the room with a vibe that I haven't seen in a long time.

As I glanced around the room, not a single spectator was still. Everyone was moving, grooving, and singing along to all the songs they know and love including: “Ain't it Funky Now,” “Sex Machine,” “Get Up Offa That Thang,” “Papa Don't Take No Mess,” and “I Feel Good.” My favorite of the night was “Soul Power,” with Chris Rob’s keyboard solo and Patrick Rainey’s bellowing saxaphone creating a remarkable and unparalleled experience. Other stand out moments included the songs, “I'll Go Crazy” and “Man's World,” both performed by the lovely Rachel Ann Morgan. Her sultry voice was exceptional on both songs.

This collaboration of musicians was magical, each person doing their part to really make the group "The Funkiest All-Star Tribute In Show Business," as dubbed by The Huffington Post. I certainly agree and urge anyone who wants a funky good time to go and check them out with your dancing shoes in tow.