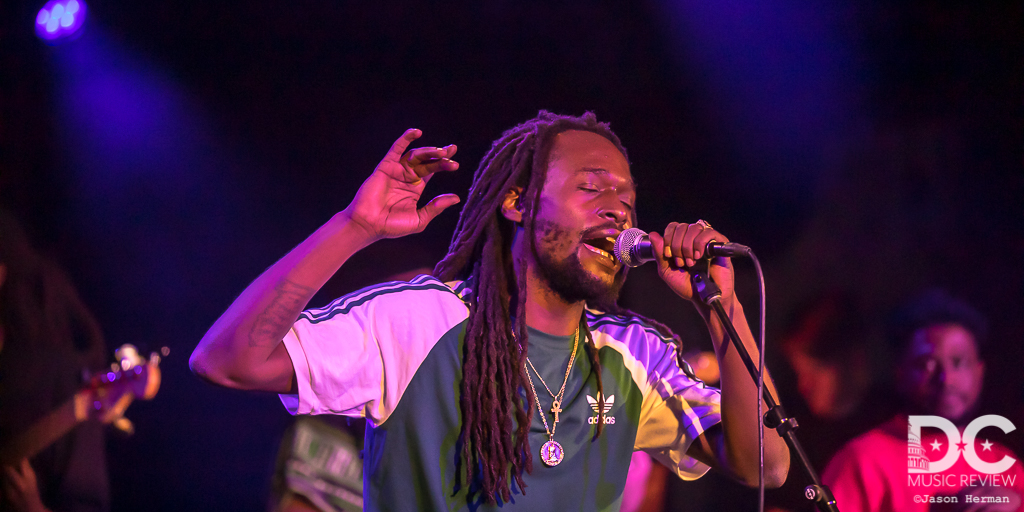 ​The Prince of positivity, Jesse Royal, was back in the Nations Capital over the weekend and once again brought with him messages of togetherness and ​love, along with a smile that never ​ceased.  Opening for Royal was ​local reggae band Nkula and Bread Doe, who both warmed up the crowd with original jams as well as some familiar sounds.  A fairly new band, formed right here in the district, Nkula has been seen popping up more and more in the area playing at venues around the DMV.   Led by Ras Abel, who hails from Ethiopia, and accompanied by a three-man strong horns section, in addition to the ​rest of the band​, the messages that Nkula's lyrics brought to Union Stage echo much of the same sentiment that Jesse ​could later be heard ​talking and singing about on stage.

After a bit of a prolonged sound check and both openers finishing their sets, the main act's band took the stage with a unique and unexpected instrumental of the Grateful Dead's "Shakedown Street" calling Royal out to start the show.  From the very start, he ​uplifted the audience with both lyrics, conversation between songs, and the music that he brought with ​him. ​ His 2017 album Lily of da Valley features a whole list of tracks that preach all about coming together, raising consciousness and standing up for what you believe.  Through the words, he ​encourages ​people and youth of the world, especially, to wake up and unite to make the future bright and positive.  Between songs, he spoke to the audience, fanning the flames of desire for change in each attendees eyes.   Building momentum with each song, the energy onstage was electric and could be felt in the crowd.  Another highlight was a congo solo that had Jesse jumping for joy and lit the room on fire.  His words on original tracks like "Modern Day Judas" and "Generation" echo the problems as he sees them and what can be done to improve the outlook for future generations.  Emphasizing the fact that it needs to be together, as one, he reiterates the undeniablility that ​change is coming and is absolutely necessary: ​If you have a clean heart, pure inside
Haile Selassie a the prototype
When I show you the truth, you gonna see the light
A teach, we a teach, we no come fi fight
I wanna see Jah children live upright
I hope you'll see it clear
Oh, Babylon beware...

Something that should be noted and can always be observed when you see Royal perform, is the gentle and kind nature of his performance as well as interactions with the audience.  His energy ​seems relentless.  Add to that the fact that there is almost never a moment where he isn't having a good time with a beaming smile on his face, and you have found a truly ideal way to end a Thanksgiving weekend.  Royal drew a very mixed crowd in appearance and age, but of like-minded people to Union Stage, all hoping to keep the thankfulness and good vibes going long past the holiday weekend.

​Almost more surprising than the opening riff the band played before Jesse took the stage, another track was covered and reminded us that a true Rasta has a passion and ability ​to love and dream like no other and that ​love extends to, of course, their partner.  Royal played what I would call the epitome of baby making music, in a way that brought bodies closer throughout the venue.  "Send Me The Pillow That You Dream On" has previously been sung by a ​whole slew of musicians in quite different genres - Dean Martin, a famous member of The Rat Pack and Hank Locklin, a country music singer from the fifties, have both been among the people to previously record the song.  The reggae star, however proved that his love spans far and wide and ​showed that his ability ​to go from ​protest music to a love making ballad is definitely what sets him apart from all the rest.   Another song, not at all surprising to hear covered during his set, was "I Can See Clearly Now" another hit sung by many an artist that carries a positive message ​to not forget about the light at the end of the tunnel. ​After wrapping his set and performing an encore, Jesse made sure ​to show the fans ​that he was as excited for them coming out on a Sunday during a holiday weekend​ as they were to be there, by sticking around for a meet and greet after the show.  Pleasant exchanges, photos and laughs were shared with any one that wanted to participate and was willing to spend an extra bit of time waiting to meet the man face-to-face.  Royal is a reggae super star who will continue to shine bright and uplift a generation whose main goal is to improve not only our own futures but the future of many who will come after us.