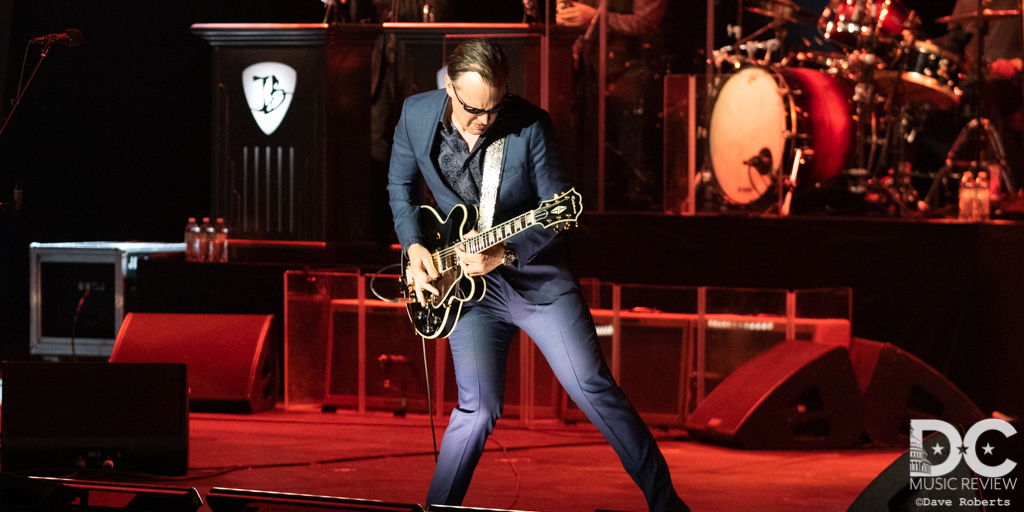 Touring in support of his 2018 album Redemption, Joe Bonamassa brought his blues-show extravaganza to Baltimore for an evening of stellar guitar playing on Friday night, March 15th.  I must admit I am not sure where to start with this write-up other than the fact that this show blew me away.  From the talent of Joe with his six-string, all the way down through the band to his back-up singers, this was one spectacular performance that I won’t soon forget.  And the cool thing is that each player in the band had their time to shine, and the credit for the music is spread throughout the musicians.

Opening the show with the sounds of Muddy Waters being played through the sound system, the band took over the song “Tiger in Your Tank” as if they were backing up the blues legend himself.  There was very little down time on the stage, other than Joe switching out many guitars over the course of the evening which created a vibe that the night felt almost like one long jam. Joe shredding some slide guitar on his Fender Strat

Joe shredding some slide guitar on his Fender Strat

The next handful of songs including “King Bee Shakedown,” “Evil Mama,” “Just Cos’ You Can Don’t Mean You Should,” and “Self Inflicted Wound,” all came off of Redemption.  This is such a deep album that Bonamassa could have played several other songs from it, all of which would have had a fabulous impact performed live. The setlist from this show was spot-on, from original material to old blues covers, from straight ahead blues rock such as “This Train” to traditional slower blues tunes like “Nobody Loves Me But My Mother.”  This song started out as a slow blues number with some quiet and seducing guitar, followed on with some smooth horns culminating into a full-on jam.  "Sloe Gin" was a mix between blues and rock with an element of psychedelic sounds that were twirling inside my dancing brain so colorfully when I closed my eyes.  Each song was affective, yet loose enough for some playful and freeform jams, but yet so precise and accurate indicating the fact that these guys gel in such a way that can only be considered magical. When it came time to introduce the band, Joe removed his shades and got a little more conversational with the crowd.  Sharing stories and not shy bragging about his band, Joe and his bandmates have got to be some of the most seasoned performers out there on the circuit. After listening to the raw talent of these guys all evening, it was not a surprise to find out that Reese Wynans was on keyboards, formerly in Double Trouble with Stevie Ray Vaughn, Anton Fig on drums from David Letterman’s Late Night Band, and Michael Rhodes on bass who has played with practically everyone in Nashville and beyond from Johnny Cash to Elton John.  Lee Thornburg on trumpet and Paulie Cerra on sax took on the role of the horn section, and Jade MacRae and Juanita Tippins were firing off some serious vocals behind the band all night long.  Simple fact, these are without a doubt some of the best players in the business.

As the band was rolling through their performance, and Joe had nailed another terrifyingly-ferocious solo, he would come back in the next song and just shred one that was even hotter. The band seemed to be gaining momentum as the show went on, almost as if the crowd was challenging them to reach another level of musical mastery from tune to tune.  There was plenty of dueling instruments including friendly competition of licks several times between Joe on guitar and Michael on bass, as well as with Joe and Reese just feeding off of each others energy bringing the main set to an end with “Last Kiss.”

Joe started the encore with just himself and an acoustic guitar, and lit the place on fire with “Woke Up Dreaming”.  His intensity was through the roof when he had that six-string strapped on.  Bonamassa just doesn’t show any fear when attacking a song, whether it be a heavy and fast paced strumming versus such delicate pieces which he is able to incorporate into his performance as well.  Ending the night by bringing the band back out for “Mountain Time”, sadly the show was winding down, but not before just over two-hours of ripping blues music was distributed to the fans.

Joe Bonamassa was absolutely fantastic, and his band was equally as good. The performance they gave to the crowd at The Modell Lyric on Friday night was second to none, as these gifted musicians shared endless amounts of talent within their musical arena of the blues with their fans.  Wrapping up their six week winter tour and preparing for a break, the band will be on the road in Europe this spring and back in the states for the summer. My suggestion is that if you are a blues fan and have not seen Bonamassa, then do what you can to track a show down. Trust me, you will not go away disappointed.

Click here to see the setlist for Joe Bonamassa performance at The Modell Lyric on March 15, 2019

4. Just Cause You Can

8. No Good Place for the Lonely

12. Nobody Loves Me But My Mother (B.B.King Cover)

Recent Coverage at The Modell Lyric