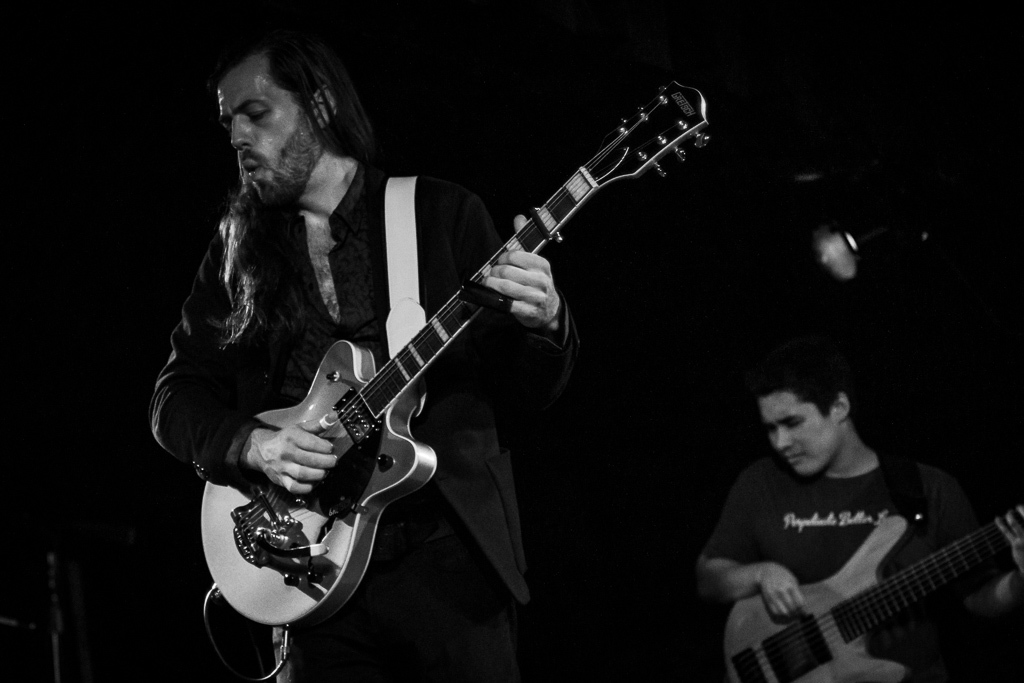 Christopher is the founder of Listen Local First DC. Chris has been a huge musical force in the DC landscape including establishing and running (until very recently) the DC Funk Parade and Kingman Island Bluegrass Festival.

With Impala DC Blues man, Jonny Grave steps out of the barren Hill Country and into the city lights.

Jonny Grave is DC's ever-present bluesman. I moved to this city 11 years ago and Jonny might have been one of the first musicians I met, playing at seemingly every bar, lounge and music venue around town. The first time you see Jonny perform or listen to his music there is no question of his musical talent or storytelling ability. His performance is a pleasure to witness and he is a true entertainer.

If DC had a blues staple joint like Atlanta's Fat Matt's or Eddie's Attic (only referencing those because that is where I lived when I really got into the blues), Jonny would have a sold-out show every Friday and Saturday night. He plays the part of the raspy blues traditionalist down to the boots, vest, and hat.

His older music recordings champion the original Hill Country blues aesthetic. Though over time Jonny has adopted all forms of blues stylings into his slide guitar driven albums and EPs.

With Impala, Jonny drops the period piece and takes a slightly psychedelic turn with his soulful guitar and organ driven band exploring many aspects or rock, blues, and funk. He makes his guitar sing in a way I have never heard on a Jonny Grave recording.

On "Una Medalla, Por Favor", Jonny channels a little early Clapton, Jeff Beck and even Carlos Santana through his powerful slide driven jams. "Impala" itself has a very Southern Funk, Meters-esque feel to it. This EP moves you, its a 28-minute jam that will entice any music fan.

I can't wait to get to my next full band Jonny Grave show. It shouldn't be long, you can see him perform in various formations around town many nights of the week. In the meantime, I asked Jonny a couple questions about his new album. Christopher Noam: Are these new songs?
Jonny Grave: Pretty new, yeah. The oldest of this current batch is "Impala," which started as a riff I came up with at a Wonderland Ballroom gig with Ben Tufts and Kevin DeSouza sometime in between a trip to Greece and a tour of the Deep South in 2017. The rest were either written in chunks or pieced together over many weeks and months of non-stop bar gigs. I think I finished the bulk of it over the last eighteen months.

Christopher Noam: Why did you release this EP?
Jonny Grave: I feel like it's part of my job, in the straightforward-professional-guitarist sense of needing to produce new work constantly, then find a way to broadcast it to strangers, gain critical attention from people whose opinion matters on a public scale, which all hopefully might lead to more opportunities, or at least better gigs. But, selfishly, I just like these new tunes a lot, I'm really proud of them, I and want to share them with anyone who wants to listen.

Christopher Noam:Aside from obviously being live, how do these songs differ from your previously released and recorded music? Jonny Grave:  The "live" component isn't such a new thing on this EP, as it was just a facet of my preferred method of recording, but ameliorated and improved for this specific release. Anthony Fowler worked hard on not just engineering our gig at Hill Country but also did a marvelous job cleaning up the audio for a full-fledged release. That said, almost everything I've ever put out in one way or another was recorded live, in the strictest studio sense of the word-- I hate overdubs, and I thrive on the organic, frenetic energy of just playing the goddamned songs together like a good musician or band ought to. Playing the song live is and has always been my favorite way to record anything, ever since I started recording stuff in my parents' basement when I was a teenager. So, all things being equal, I think the songs sound different from what I played a year ago, or five years ago, or a decade ago, because I'm a different person than I was then. I could wax poetic here, but I'll spare you the recitations. Heraclitus, "stepping in the same river twice," blah, blah, blah.

Christopher Noam: What lead to that change?

Jonny Grave: Three big things: Streaming music, travel, and my own hometown's music scene. I didn't get into streaming music until very recently. For years, I had an iPod Classic that could hold 40,000 songs. I downloaded my music and uploaded it manually. I didn't listen to music through my phone, because I didn't want to try and enjoy Red Garland or White Denim through the same device I get emails from my health insurance provider or text messages from ex-girlfriends. Further, a lot of the music I downloaded and saved to hard drives over the years was some pretty rare stuff. Field recordings of Blues greats, promo-only copies of major releases, live/acoustic versions, remixes, and mix-tapes. I was convinced that I couldn't find anything as unique as my own collection anywhere else. This reinforced the anger and spite I held toward the concept of streaming music apps for a long time, right up until I fell on this gem.

Slowly, I started veering away from my own carefully-curated iTunes Library and leaning more on beattapes from independent YouTube channels, or suggestions from the robots through Google Play. I found some interesting stuff, expanded and broadened my palette, saw music from different points of view (this was a big one), and allowed myself to enjoy the music that I heard. I started this right around the same time I started traveling, back in 2015. Since then, I've been to Berlin, Grenoble, Paris, all over England and Scotland, Beirut, the Beqaa Valley, Tel Aviv, Bethlehem, Athens, Santorini, San Juan, Vieques, Fortaleza, Rio de Janeiro, Curitiba, around the whole island of Ireland, Montreal, Cape Town, Johannesburg, Pilanesburg, a handful of tours through the United States, and several trips to the deserts outside of Las Vegas and Los Angeles. As I traveled, I kept the earbuds out of my skull, and tried to listen for music I've never heard before. Slowly, but surely, little elements of my travel experiences seeped into the music I played, whether it was something I screwed around with at home on the couch, or something I had to pull out of nowhere at a Roofers Union gig.

Luckily, I live in a community with amazing musicians, some of whom not only approach new tunes like these with gusto, but will even take certain cues as a challenge. Check out Ben Rikhoff's solo on "Impala," or Marty Risemberg's drums on "Gospel Holdover," or Scott Schoem's two-part keys solo on "Golly." Each of these guys comes from a very different musical background and plays in at least two other projects of completely different styles. Luckily for me, they have fun at the bar gigs I book, and keep taking me up on the offer to play together. I would also be remiss to not mention all the other folks I played with over the last couple years at last-minute pick-up gigs around town, namely Ben Tufts (Fuzzqueen, Bobby Thompson Project), Adam Ashforth (Oh He Dead, Dr. Robinson's Fiasco), Enzo Ferrogagio (Black Dog Prowl), Isabelle De Leon (JoGo Project), Brian Farrow (Dom Flemons, Hackensaw Boys), Kevin DeSouza (Uptown Boys Choir), Jason Mendelson (Metrosongs, Classic Albums), Andrew Grossman (The North Country), Ken Francis Wenzel (Cross Kentucky, Bobby Parker), Ardamus  and Terry Boes (Alex Parez & the Hell Rojos), all of whom were indispensable to the process of turning these tunes into something I'll take all over the country.

Christopher Noam: Who were your influences for this album and your music in general? Who if any are your contemporary influences in music?

Jonny Grave: Streaming music apps have far and away had more to do with the new EP than any one specific artist, song, style, or release. I've changed how I listen to music; what I'm listening to is, and has always been in constant flux. If you don't believe me, here's a 3.5-hour Spotify Playlist of some tunes I've had in heavy rotation for the last year or so.

Christopher Noam:What do you feel is unique about your songwriting process?

Jonny Grave:  I think I tend to treat my songs less-preciously than a lot of musicians. It's not that I don't value my own work, or take it seriously; it's that my goal is to continue playing, writing, creating, learning, appreciating music, and I feel like I only have a finite amount of time on Earth to do it. I'd rather discover something new than get hung up on marveling at my own work. I'm also lucky to live with a singer/songwriter/multi-instrumentalist, who works her ass off on her own music. Maryjo Mattea, my partner, has a dozen ideas a day for her various musical projects, and never shies away from sharing them with me. She's impressive, but she's also encouraging, and won't hesitate in pushing me to create. Stella, our pitbull, is a significantly less-responsive audience. She never claps.

We encourage you to listen to Impala and support a local DC Musician by purchasing this album.

To learn more about Jonny Grave or The Jonny Grave Quartet please use one of the following resources.