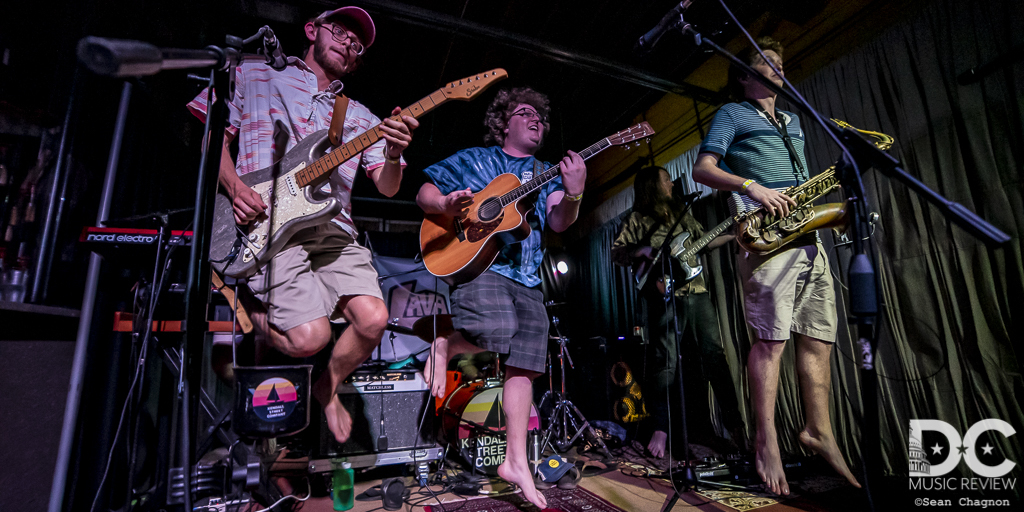 Lava Presents, a promotion company run by Norfolk local Josh Coplon, has been on fire recently, booking talented acts in venues from Hampton Roads all the way to Richmond, Virginia. Saturday night was no exception and featured two up and coming Virginia bands at Norfolk’s cozy and eclectic venue, Toast. Charlottesville’s Kendall Street Company, and Richmond’s South Hill Banks played a couple of impressive sets in the one of a kind venue, where you can be dazzled by disco balls in the restrooms and lounge outdoors on couches in connex boxes. South Hill Banks kicked the night off with their lively spin on bluegrass music. This certainly is not your grandfather’s bluegrass and in no time they had the crowd stomping their feet and dancing the night away. Singer and guitarist Lance Thomas leads the charge with enthusiasm that cannot be contained. When he doesn’t have an ear to ear smile on his face, he sporting a stank face that any musician would be proud to have. Whether it strumming chords or noodling his way through a solo, those fingers stay flying along the frets. The Horrocks Brothers, Eric and Ryan on mandolin and banjo respectively, are picking masters who maintain the bluegrass roots sound, but take it to another level when the band winds through their improvised jams. Lead guitar and vocalist, Dan Fiasconaro, floats well placed harmonies and twangy, country and western (both kinds!) style solos with his Telecaster with ease. With Justin Doyle, holding down the low end on his double bass, this is one well rounded band that will impress anyone. Kendall Street Company may look young, but like books, they shouldn’t be judged by a cover. Their tightly knit group has been making music since 2013 and they have burst from the college scene and been showing up on large stages up and down the east coast. It’s easy to see the exchange of energy between them and the audience as they feed off each other into a mutual frenzy. Louis Smith, acoustic guitar and vocals, croons the light-hearted lyrics while dancing when he gives his vocal cords a rest. Sax player, Jake Vanaman, adds a smooth, subtle layer to the verses and chorus, but when the band lets him loose on a solo, it is quite an impressive display. Their tight rhythm section is comprised of Brian Roy and Ryan Wood, on bass and drums respectively. These guys keep solid beats and impeccably follow the lead when Smith starts throwing improv curveballs at them. Lead guitarist, Ben Laderberg, rips out screaming solos along with keyboardist, Andrew King, who dances with huge grin when he’s not lighting the ivories up.

Both bands will be out and about this spring, and they will both be making appearances at Rooster Walk Music Festival in Martinsville, Virginia with a slew of other talented bands. Check their webpages for a listing of their upcoming shows, because they are not to be missed!