The Killers Perform At The Anthem 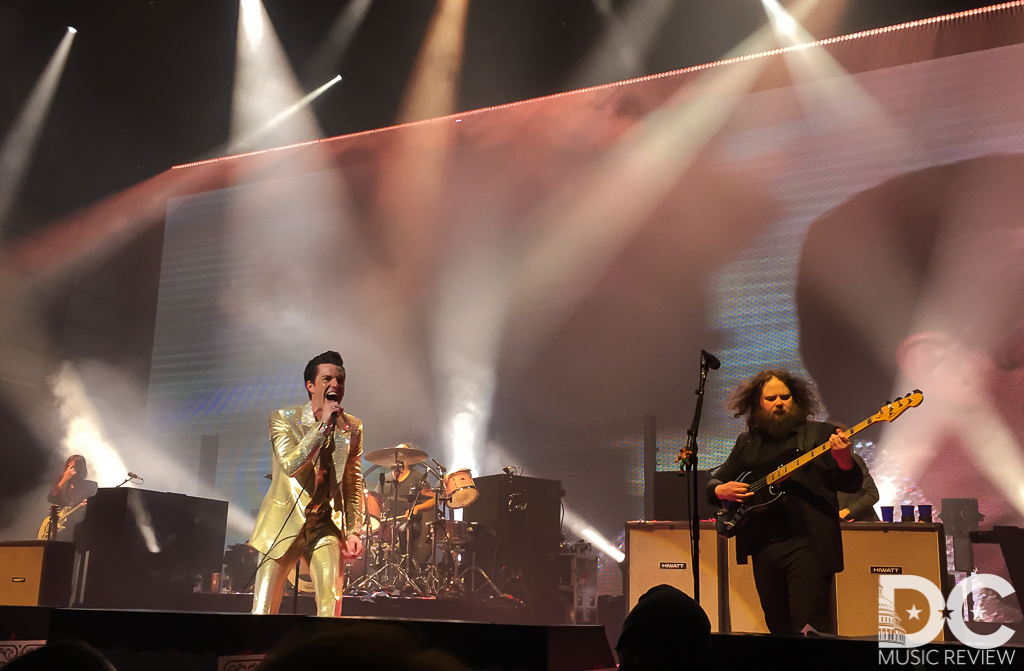 The Killers brought their epic brand of soaring rock last week in Washington, DC, playing to an ecstatic capacity crowd at The Anthem on January 10th. Mixing their massive radio hits from the last decade along with new material, the band delivered a transcendent performance and left the audience of over 6,000 raving. The Killers are one of the finest live bands in the world, powered by anthemic songs and one of the most charismatic frontmen in rock and roll, Brandon Flowers. The band’s reputation was reflected in the long line which formed at the venue before the show. The Anthem, despite being a new concert hall which opened in October of last year, has already hosted several sold out shows. But this particular sold out show was on a different level. On a cold January Wednesday night - with the frozen water of the adjacent harbor still visibly thawing out from the recent bomb cyclone - the excitement of the fans was palpable. Hundreds of ticket-holders braved the chilly conditions and showed up hours early, forming a line that snaked all the way back and around the perimeter of the District Pier in front of the venue a full hour before doors even opened. People in line could be heard conversing, sharing their excitement for seeing the band play. For some, it was their third or fourth time seeing the band. For others, it was their very first time experiencing the Killers live. But no matter their previous show-going history with the band, everyone was united in their sheer enthusiasm and anticipation for the night’s concert. The Killers did not disappoint any of them.

The band took the stage at 9:15pm and kicked off the night with “Run For Cover” and “The Man”, two energetic tracks from their new album Wonderful, Wonderful. The opening song, which greeted the crowd with the quick rhythmic strumming of guitar chords from touring guitarist Ted Sablay, is perhaps the most traditional Killers-sounding track from the band’s fifth studio LP. Featuring synths and guitar tones reminiscent of New Order and a big chorus in the spirit of Bruce Springsteen, “Run For Cover” is an urgent rocker with timely, politically-inspired lyrics (“He got a smile, he’s fake news” / “Just run for cover, you’ve got nothing left to lose”) and a personal narrative that suggests that perseverance in the face of difficulty isn’t always possible.

As is always the case with a Killers live show, the band’s performance was defined by the showmanship of the convivial and charming Flowers. Moving confidently from one side of the stage to another, he captivated the audience throughout the night. “We’re brought to you from fabulous Las Vegas, Nevada,” said Flowers to the cheering crowd before quoting the Vegas daredevil Evil Knievel and subsequently starting the power ballad “The Way It Was.” Engaging the audience with a call-and-response singalong in the middle of the song, Flowers led the way to a rousing finish before transitioning to Hot Fuss lead track and fan favorite “Jenny Was a Friend of Mine.” The song’s punchy and urgent bass lines - expertly played by touring bassist Jake Blanton - propelled the start of the tune, while 80’s-style synths, frenetic but skilled drumming, and dazzling green lasers brought it to an epic conclusion.

If Flowers is the driver of the Killers lamborghini, then drummer Ronnie Vannucci Jr. is certainly the engine that makes the band go. Pounding the drum kit with his thundering tom rolls and rapid-fire snare hits throughout the 20-song setlist, Vanucci further elevated the energy of both the band and the already enthusiastic audience. Even though he kept up his powerful, unique drumming - he never quite plays the same fill twice on a given song from one show to the next - throughout the duration of the night, his massive chops were most evident in numbers like “Somebody Told Me,” “Spaceman,” “Runaways,” and of course the songs which are The Killers biggest hits - “All These Things That I’ve Done,” “When You Were Young” and “Mr. Brightside.”

Even though this tour has the Killers in support of their new album, the band chose to evenly visit material from throughout their 17-year career. Four songs from Wonderful, Wonderful (including “Rut” in the middle of the set and a bombastic “The Calling” as the first song of the encore) were included in the setlist, each of them fitting in well with the more classic fare. Hot Fuss, the landmark debut album which helped define the post-rock landscape of the early 2000’s, was the most well-represented album during the night, with each of its six songs eliciting a rave response from the crowd.

Staying true to their Las Vegas show roots, the band saved the best for last in both their main set and the encore, bringing the house down with singalongs of some of the mega-hits in their catalogue. “Read My Mind,” the mid-tempo love song from the sophomore album Sam’s Town, had the crowd swaying and turning to their friends and reciting the lyrics. Then one of the top highlights of the show - “All These Things That I’ve Done” - closed the main set. Backed by lovely gospel singers, Flowers led the Anthem crowd in the biggest singalong of the night, as the entire audience belted out “I’ve got soul, but I’m not a soldier” to Sablay’s palm-muted distorted, rhythmic guitar strumming in the song’s bridge before Vannucci brought back his drums into high gear in perfect time with a blast of confetti and streamers. The confetti poured down from The Anthem rafters and turned the venue into the biggest party on the East Coast.

After a brief break which allowed Flowers to change into an ostentatious gold Elvis-style suit, The Killers returned for an encore which brought the evening to a thrilling conclusion. Following “The Calling” and Hot Fussdeep track “Andy, You’re A Star,” the band sent the crowd’s energy soaring with the opening flourish and piercing guitar lick of “When You Were Young.” Yet again, Flowers had thousands of people singing along to the lyrics during the bridge, this time only accompanied by a synth - “You know the devil’s water it ain’t so sweet / You don’t have to drink right now / But you can dip your feet / Every once in a little while” - before the rest of the band re-joined ahead of a wailing guitar solo and another well-timed blast of confetti and strobing lights, Flowers belting out notes over top of it all. The soaring vocals and accompanying melodies gave this concert-goer goosebumps.

As if that weren’t enough, the band somehow raised the energy level yet again with a powerful performance of “Mr. Brightside” to end the night. The familiar opening arpeggio guitar riff from one of the biggest radio hits from the past 20 years drew even more celebratory cheers from the delighted audience. It’s truly rare to come across moments where thousands of people can share pure enjoyment with other complete strangers, bonding over a song which was released almost 15 years ago. But such is the power of music, and that is part of the appeal of The Killers. As Vannucci rolled his toms and snares and crashed his cymbals as part of the final song’s outro, Flowers thanked the crowd and a fantastic night came to and end. Fittingly, one of America’s best bands came to The Anthem and played anthems of their own.

Click here to see the setlist for The Killers performance at The Anthem on January 10, 2018

6. Jenny Was a Friend of Mine

8. For Reasons Unknown (with Brandon Flowers on bass guitar)

9. If Still It Can't Be Found (Joe Pug cover with Joe Pug)

16. All These Things That I've Done

3. When You Were Young

The following photos are courtesy of Tom Eng who allowed us to use and share his wonderful photos from this performance.

Social Media related to this performance

The Killers were beyond wonderful. In fact, they brought me to tears. Thank you for bringing life back to my soul

Amazing concert tonight! #TheKillers were fantastic, what a show. pic.twitter.com/tI1yXNkJ7G