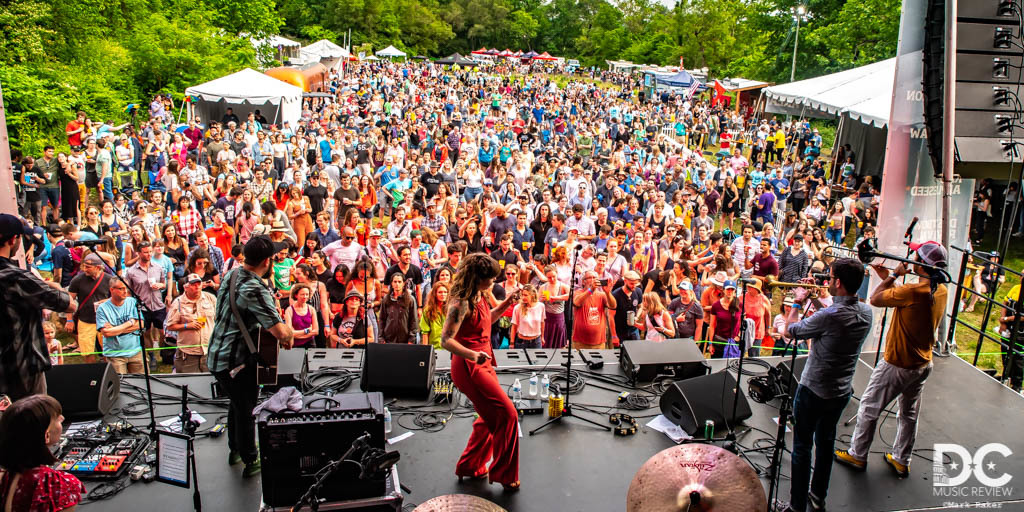 The 10th annual Kingman Island Bluegrass and Folk Festival (KIBFF) was held on May 4, 2019. The festival gets bigger and better every year with twenty eight bands played on four stages on this tenth anniversary year. This year's record crowd was supported by over 500 volunteers and at times it looked like mother nature had a rain in store for us but the storms held out and it was a perfect festival day. Years ago the meadow was an asphalt parking lot, and students have been planting the Wetlands for the last 25 years. Thanks to all of their efforts we have this beautiful island on which to hold a great music festival. As part of the environmentally friendly aspect of KIBFF they have a zero waste goal.

Volunteers are located throughout the grounds to help with composting, recycling and proper trash disposal. Upon entering participants were provided with a reusable cup for water and beer. The audience clearly embraced the zero waste education and goal of the festival. Many people even brought their cups from previous years. The ultimate goals of the festival are to raise awareness of this incredible community resource and to provide an opportunity for people to experience music in a beautiful natural surrounding. In keeping with those goals, Kingman Island Bluegrass and Folk Festival is a family and dog friendly event. The day was all about friends having a good time. At least 2 people were there visibly celebrating birthdays. Ted was celebrating his 30th birthday at KIBFF with a group of friends they enjoyed watching their friends Drew Beckman and the Boundry Boys perform. Jody was also celebrating her birthday with her family, music and food.

There were fun activities for all ages.  The Kid Zone in the Main Meadow was busy with head and face painting, arts & crafts, music and games as well as some educational projects to keep kids engaged. REI was again offering free kayaking around the island with Anacostia Riverkeeper providing free group educational boat tours throughout the day, ACE Hardware helped attendees pot their own plants, The Institute of Music Traditions had instruments for people to learn about and play. There were food trucks near the Kingman Stage and local craft and artists on the road between stages. In keeping with the environmentally friendly theme of the festival Atlas Brew Works were featured, serving their locally made, solar powered brewed beers. “Protecting our environment is a responsibility we all share,” said Atlas CEO Justin Cox, “Converting our energy source to sustainable and renewable solar power will help offset our carbon footprint and continue our efforts to be a green brewery.” KIMFF also welcomed supporters Coney Island Brewing, Heineken and Red Stripe.Tito’s Vodka returned and new this year was George Dickel providing whiskey tasting samples.

Of course the main event was the music…… A total of about 25 stage hours of music was played during the 8 hour event, with 28 bands on four stages. The Heritage Stage is on the way in and is the first taste of the festival music for arriving fans. The opening band on the Heritage stage was Wicked Sycamore a Baltimore/ DC area all-female trio.

ilyAIMY- Which stands for “I love you and I miss you”- opened the Kingman Stage. We learned that the song “Frankie and Johnny” was based on a real event, however the true story is that Frankie was aquitted of the murder for self defence and never went to the electric chair. And it still made for a good song….

On this Star Wars theme day, there were many jokes and songs about Star Wars. And May the 4th Be With You, too. A local fan favorite, Justin Trawick and The Common Good, played a mid day set on the main stage. Trawick said he loves playing at KIBFF and that the band loves the island, the environment, and the fans.

Jess Eliot Myhre  who was the emcee of the Meadow Stage, and also played a set there, told DCMR  “I love this festival because there are so many incredibly talented local bands playing all over the place.  All of the festival attendees can expect to be completely blown away by somebody that they have never heard before. Kingman island as a site is a very unique and precious spot in Washington DC and I love that we are bringing those two things together.“

On the Meadow Stage, Oh He Dead  a local indie soul band from Washington, DC. opened the day. Odetta Hartman and Alex Freedom got the audience hyped with some interactive songs. They also treated the audience to two songs never before played in the United States. Boston based The Ballroom of Thieves, who describe themselves as a Rock Band in a folk suit, closed out the Meadow stage with their alternative rock & folking roll music.

While walking the island between the Kingman and Meadow stages you pass the Fraser Stage.  After a brief introduction from the emcee Chad Christian, Sweet Yonder opened. Later in the afternoon NoVA-based mandolin player Jack Dunlap Band played for the local fans. After their set, Geraldine posted “We really enjoyed playing for such an amazing crowd and loved sharing the stage with so many killer bands. Thank you to all our new friends who rocked out with us, and to Living Classrooms and Kingman Island for putting on a perfect festival.” Charlottesville VA’s Hackensaw Boys, who were as much fun to watch as the were to listen to, played a mix of old and new songs on the main Kingman Stage. They had the crowd jumping up and down and dancing hard to the end of their set. For 20 years they have been sharing their “burning hot vision of American roots music into a new age, fueled as much by a rowdy punk spirit as by the traditional masters that first inspired them.”  Their new album, "A Fireproof House of Sunshine" will be released June 21st 2019.

The final act of the day was Dustbowl Revival, from Venice Beach, CA, playing KIMFF for the first time. They thanked Kingman Island for “including a weird band like us at a bluegrass festival.”  Keep an eye out for their new album as well. It was just mixed and will be coming out this fall. They played a mix of rock, folk, funky folk and jazz. Vocalist Liz Beebe got the audience singing along on “Busted”.  Beebe said “We were so stoked to come out to Kingman Island. We were really happy to be included, the fans were so into it and the weather held out. We had a great time and can’t wait to come back.”