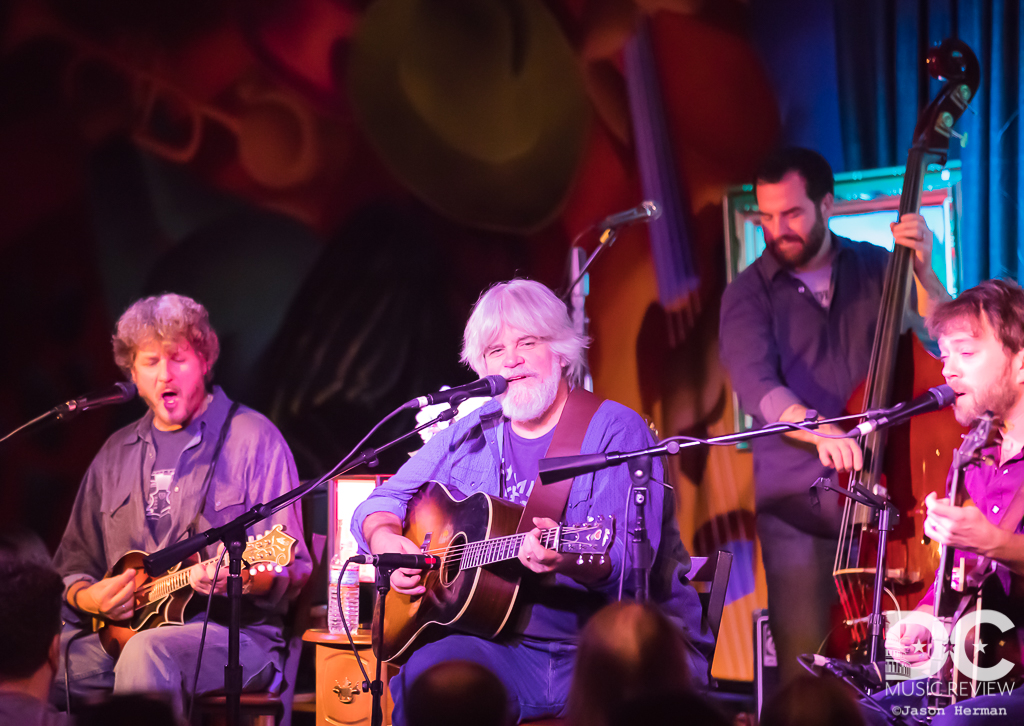 ​As audience members sat in their assigned seats, Leftover Salmon took the stage and Vince Herman (vocals, guitar) announced, “Welcome to the living room!”. Herman then played a record from a small record player set up on the quaint living room stage. As they had during the entire “Acoustic Living Room” Tour, Herman and his bandmates Drew Emmitt (vocals, mandolin), Andy Thorn (vocals, banjo), Erik Deutsch (keyboards), Alwyn Robinson (drums, vocals), and Greg Garrison (bass, vocals) embraced the small crowd atmosphere and performed in the intimate living room setting and connected with those in attendance.

Audience members were so close to the stage that when the keyboardist Erik Deutsch adjusted his piano bench he had to turn around, nod his head, wave his hand, smile, and gently apologize to an audience member for coming a bit too close to their face with his bench.  That is exactly how close those in the crowd this evening were to members of Leftover Salmon. At another point in the evening, Herman left the stage and sat in an empty chair at a table directly in front of him. Herman stayed a few minutes, sipped a beer, chatted with stunned audience members, and enjoyed the performance from a different perspective.

Well into the first set an audience member shouted from the back of the venue “Play it loud! Give me one of them [loud songs]!” Vince Herman jokingly retorted back “I thought I told you to stay in the truck!” The band and audience banter continued, which allowed the audience and band to connect intimately throughout the evening.

During the performance, one could see several die-hard fans taking notes and jotting down setlists. During one particular song, these fans looked at the setlist and started checking their phones and whispered to one another, “I haven't heard them play that in forever!” Indeed, the performance included one special rarity, as Leftover Salmon performed “Wandering” into “Coal Tattoo” for the first time in 13 years.

There was a moment of playful banter on stage as Thorn informed the audience that, “This song [Ed: “Carnival Time”] was produced by Jerry Garcia”, to which Herman facetiously asked. “Who is that?” Thorn quickly retorted, “You!”

Herman and the entire audience couldn't help but share in a belly roll of laughter.  As soon as Herman could catch his breath, the band was transported back in time to a blissful version of “Take the Long Way Home” by Supertramp.

The evening’s performance was so good that, while audience members tried to stay in the moment, they would occasionally scan the room for a taper microphone or look back at the soundboard to see if Leftover Salmon was recording this performance.

One can only hope that LiveSalmon releases soundboard performances of these very memorable acoustic performances.

2. Blues in a Bottle

3. Valley of the Full Moon

7. One of These Days

3. Get Me Outta This City

1. Let in a Little Light