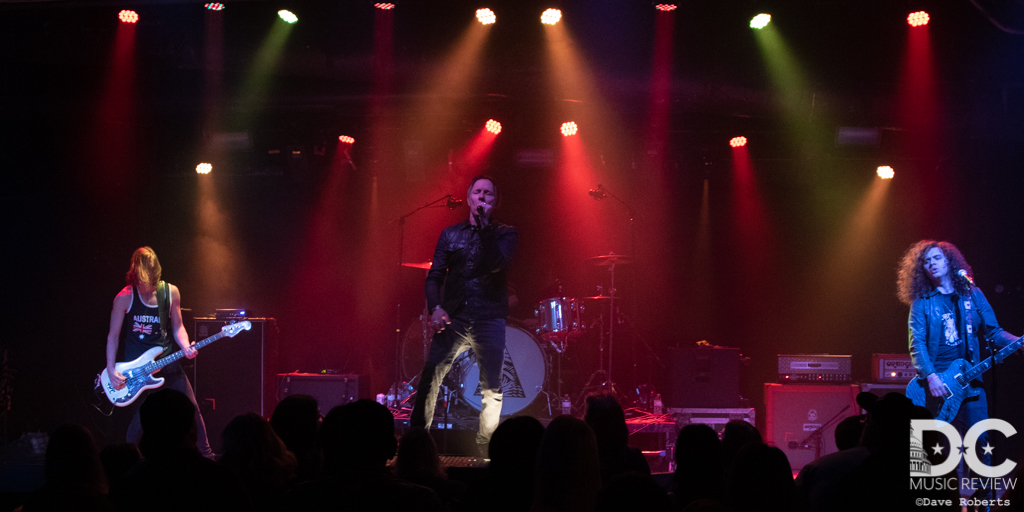 On a cold Saturday evening in downtown Baltimore I can tell you that the Baltimore Soundstage was heating up inside with the coziness of some rock and roll love being shared by After the Broken, Ignite the Fire, and Stone Horses.Although Charm City was feeling the effects of winter, I guarantee you that the Soundstage was feeling the effects of some screamin' guitars, thumpin' basses and bangin' drums as these bands decided to transform this club into a gem of a party. After the Broken and Ignite the Fire were the opening bands for the evening and were able to supply the crowd with enough enthusiasm and energy to entertain them until the headlining act.Although I missed After the Broken, I was able to catch the last part of Ignite the Fire’s set, and I’m glad I did. They have a cool, solid-crunch and aggressiveness to their music that has a relevant sound in todays scene, as well as the talent to deliver a rock-solid performance.

From Taneytown, Maryland, this hard-rock band is supporting their latest release Between Shadow and Solace (2018) and is featuring a handful of songs including “Victim of Shame,” “Anchor,” “Echoes,” and “Lazarus” in their set. A spicy band indeed that is led by singer Jack Gurecki, Michael Nelson and Mark Quinn on guitars and vocals, and rhythm combination of Holly Smith on bass and drummer Caelan Gregory. If you get a chance to pick up their music and see them live I would highly recommend it. It is awesome to see some talented Maryland musicians that are dedicated to this musical genre and this album surely deserves exposure.

After a pretty quick set change, it was time for Stone Horses to hit the stage and bring what is a wide blend of musical flavor to the Soundstage club Saturday night.Slated as a record release party, the band had some new music to share. Sensing a lot of musical influence within this group, from hard rock and alternative to blues, the guys were excited to roll out some new jams for those that came out to hang for the show. I must admit that I have not heard of Stone Horses before, nor was I familiar with their music and background until seeing the Soundstages’ listing of their upcoming performance. Interested to dig a little deeper steered me to listen to their EP Stone Horses (2017). Really digging this album and finding out that they are pretty much a local band made it apparent that this was a must-see gig.

Singer John Allen is not a new face or voice to the Baltimore scene having played with Child’s Play and Charm City Devils, spanning a history of around 30 years in the music business. Allen is inspired to get some new music out that he has been working on, and is excited to continue performing and sharing stages with great artists such as Greta Van Fleet, Slash and Myles Kennedy, and Rival Sons, all bands Stone Horses have been supporting over the last year.

Full of energy and onstage presence, Stone Horses has the ability to grab the audience in such a way that brings them right into the performance along with the band. Guitar player Ted Merrill is a force to be reckoned with, taking his aqua-colored Paul Reed Smith guitar to heights of shredding madness all over the stage. This young guitarist hardly ever stands still, and is a solid player and contributor of some saucy-licks throughout the evening. Along with Rick Reynolds (equally as energetic as Merrill) on bass originally from Australia, and Jason Heiser from Charm City Devils on drums, this rounds out a solid line-up that is heating up the area with some solid gigs. “Life is Hard,” “Flirting with the Devil,” and for the first time played live,“Roads” (which put an acoustic guitar into Allen’s hands), proved to be steadfast in the set. Newly released songs “Skipping Stones” and “End of the World” fit well into the song repertoire, and closing the night with the powerhouse “Reckless Ways” rounded out a great evening of rock.

The highlight of the evening was that the boys had a few surprises up their sleeves as they brought in a few friends to jam with them, and this is when the history plays a role in the show. Nicky Kay, on a lovely Gibson Les Paul (Child’s Play & Charm City Devils) and Idzi (bass player for Child’s Play), sat in with the boys and played a few old Child’s Play tracks including “My Bottle”. The music fans really enjoyed seeing these guys come out and rock! I don’t know when the last time was that they all played together, but for this Saturday night in Baltimore it sure was a treat.

Stone Horses is solidifying a track-record of solid music and performances. With new music out, a gifted line-up and a history of live-music in the region, Stone Horses, as well as opener Ignite the Fire, should be noticed and supported within our local scene. It’s exciting to realize that the Baltimore and Washington areas are chock-full with options of great music. With the amount of venues available to support our local bands, there is no doubt that the DMV (D.C., Maryland, and Virginia) should not be able to produce nationally viable acts, and that includes the bands that heated up the Baltimore Soundstage tonight.