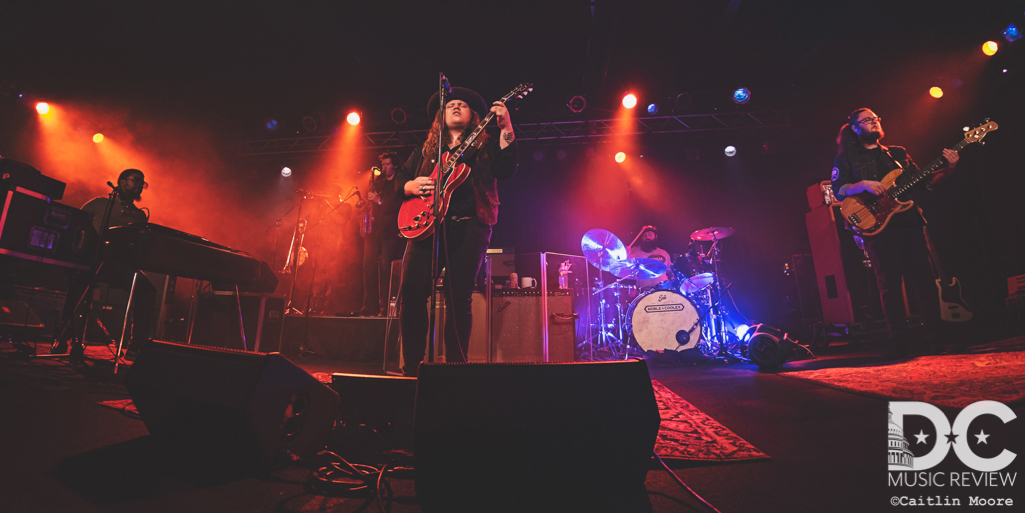 The Marcus King Band (MKB) returned to the DC area for a headlining gig at The Birchmere Flex Stage on Friday, August 17 as a part of their Carolina Confessions tour. The band had an eventful summer, touring with the Tedeschi Trucks Band as a part of the 2018 Wheels of Soul tour - including a stop at Wolftrap on July 11. On Friday, fans were treated to an extended set by the young but experienced band from South Carolina. MKB was in exquisite form and had the crowd rocking from beginning to end with an inspired set that included mostly originals - including a new tune - as well as some choice covers. The band was hot early, opening with a rocking 'What's Right' that immediately hooked the lively crowd. The band tore into 'Sharry Barry' - an upbeat instrumental that featured a Deshawn "D'Vibes" Alexander on a combination of clavinet and organ. Marcus King (vocals, guitar) took the lead on his trusty Gibson ES-345, unleashing a stunning solo before transitioning into the familiar '25 Or 6 To 4' (Chicago) hook. The rhythm section, composed of Jack Ryan (drums) and Stephen Campbell (bass), had the train rolling as King wailed with a bit of wah for added distortion. Justin Johnson (trumpet, trombone, tambourine) and Dean Mitchell (saxophone, flute,  pedal steel) provided a tasteful touch on horns and highlighted MKB's depth and diversity of sound. The band ripped through a bevy of tunes during the set, including the newly-released 'Homesick' (listen here), off the upcoming (and highly-anticipated) Carolina Confessions album due October 5. The heartfelt tune featured King's soulful voice and served as a tribute to his girlfriend, Haley. The band followed with 'Thespian Espionage,' an extended jazzy number that turned funky with D'Vibes trading licks on keys with King's exquisite guitar fretwork. The set continued with 'Rita Is Gone' and 'How Long' before the rocking 'Plant Your Corn Early' that included a John Bonham-esque drum solo by Ryan.

King donned his goldtop Les Paul as the band paid respect to the Queen of Soul – Aretha Franklin – who passed away the day prior. 'The Weight' was written by The Band in 1968 and was famously covered by Aretha the following year and featured Duane Allman on slide guitar. The set closed with the apropos 'Virginia,' a swampy rocker, as King introduced his bandmates before departing the stage.

The venerable guitarist returned to the stage on acoustic for 'I Won't Be Here' that also featured Mitchell on pedal steel. The band joined him to close the show with 'Confession' and 'Compared to What?' before a raucous and appreciative crowd. Next up was a slot at the Hot August Festival the following day, before a Sunday night show near Ocean City, MD. The road continues for the Marcus King Band, heading west to continue their extensive tour before venturing to Europe for 15+ shows in the fall.

Click here to see the setlist for The Marcus King Band performance at The Birchmere  on August 17, 2018

The Weight (The Band cover) (Tribute to Aretha Franklin)

I Won't Be Here

Recent Coverage At The Birchmere