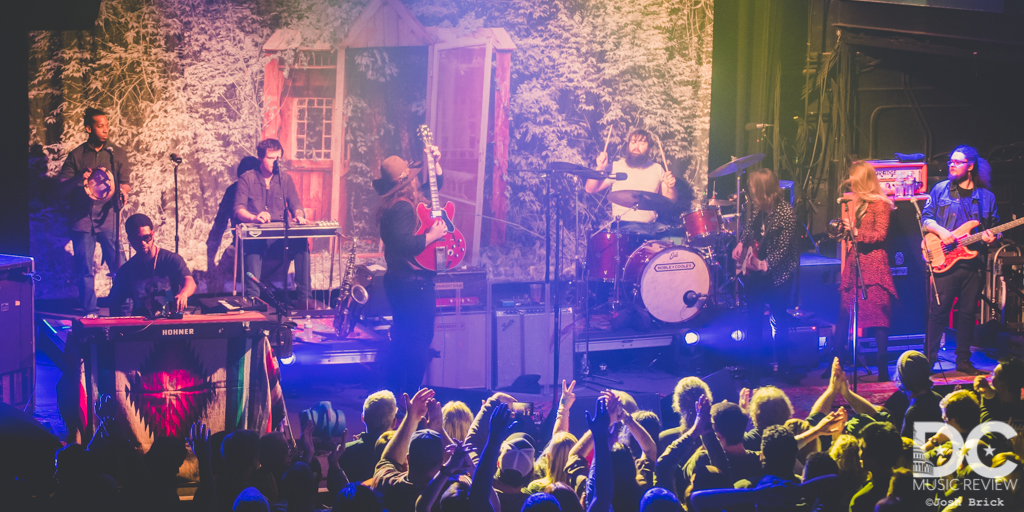 The Marcus King Band (MKB) delivered a stunning performance for a sold-out crowd for their 9:30 Club debut last Thursday, December 6. On a chilly night in The District, Marcus King and his bandmates brought some serious heat to the historic room known for its memorable shows. MKB played several other DMV-area venues in 2018 including The Anthem (opening for Umphrey's McGee), Wolf Trap (with Tedeschi Trucks Band and Drive-By Truckers), and The Birchmere FLEX Stage back in August. Thursday was likely a date circled on the band's calendar and they did not disappoint. The band came out of the gate hot, blitzing the fans with incredible energy as King ripped some killer blues riffs before segueing into the apropos, "Virginia." King made sure the crowd came along for the ride, exclaiming "DC are you with me?!" to a raucous response. It was apparent early that it was going to be a special night. Next came "Where I'm Headed" off the band's recent release, Carolina Confessions,  the band's best album to date. From there, the rocking sextet delivered heavy renditions of tunes off their previous two albums and showcased their diversity of sound. Marcus King brings a wide range of aural sensations to the stage including the obvious southern rock influence that is supplemented by other genres including soul, R&B and funk. This range was on display during the 13-minute "Honey > I Can't Quit Ya > Sexy Ida > Papa Was a Rolling Stone" jam that had the crowd hyped. King got a little help from his friends, including Deshawn "D'Vibes" Alexander (keyboards) and The Royal Horns, comprised of Justin Johnson (trumpet, tambourine) and Dean Mitchell (saxophone, flute, pedal steel). Marcus had the room in a tizzy, the crowd singing and clapping along to the motown classic. The band slowed things down for "Side Door" an R&B tune off the recent album that helped showcase King's raspy vocals. Everything was working as the band swelled with intensity before taking it down as Marcus displayed his guitar skills, with a gorgeous tone and massive bends as he weaved his web through an intense solo. The band kept rolling with "Thespian Espionage," a funky jazz number off the band's self-titled 2016 release that featured Stephen Campbell's creativity on bass supplemented by The Royal Horns. Nearing the end of the set, the band made sure to bring the power with the first track of the bands debut 2015 album, Soul Insight. "Always" began with a massive rock riff by King to start off the exploratory jam that featured D'Vibes getting spacey on clavinet before segueing into "He Bite Me" by The Meters. Jack Ryan (drums) got a chance to showcase his precision and power on the kit with a John Bonham-esque drum solo before the band rejoined for a massive "Stratus" (Billy Cobham) crescendo to close out the song. The Marcus King Band saved the best for last to close out the extended set, with the title track off their recent release, Carolina Confessions. The tune is one of King's best songs as it captivated the sold-out room. Everything felt right as King sang about his departure from his home state of South Carolina to hit the road and share his music with the world. It proved to be the perfect end to a masterful set in front of the capacity crowd.

The group wasn't done, though, and returned for a three-song encore that included the heartfelt love song, "Homesick." King brought out Ida Mae for the last couple of tunes, the British acoustic soul and americana duo who opened the show. The husband and wife team of Chris Turpin (guitar, vocals) and Stephanie Jean (vocals) lended their vocal talents on "Autumn Rains" and the fitting closing song, "Can't Find My Way Home" by Blind Faith. The crowd filtered out of the 9:30 Club with smiles on their faces, amazed at the musical genius they had just witnessed.

The Marcus King band plays a couple of Georgia dates before opening two shows at the Capitol Theatre for As the Crow Flies on December 30 and New Year's Eve.