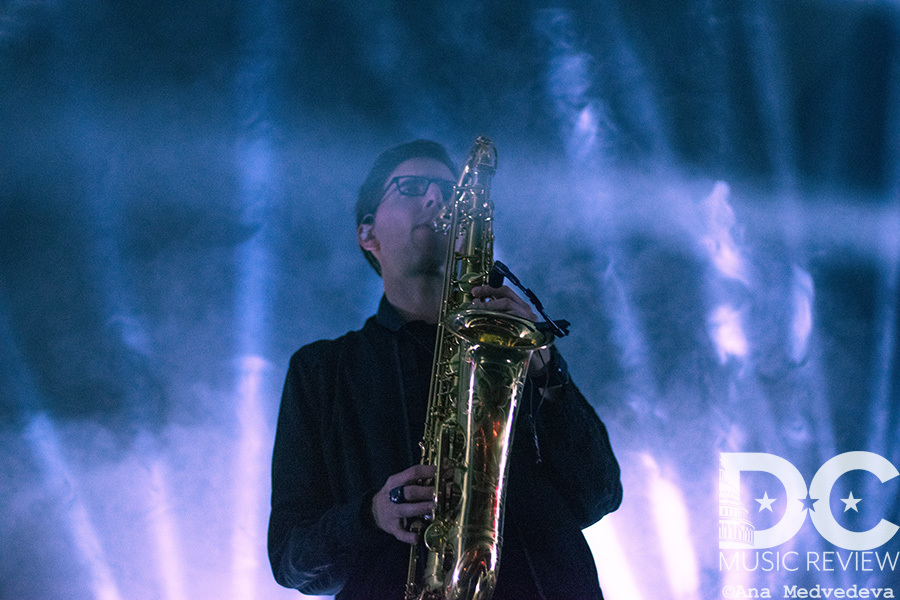 Occasionally, one gets the pleasure of witnessing “the next big thing” begin to take hold—Wednesday, May 9th, was that rare night for the district. A chattery crowd filled the 9:30 Club, with beers and cocktails glued to just about every hand. Wasting no time, the three launched into the opening number, with Gongol commanding the stage with her sharp dance moves. Twisting and turning to the beat of the music, Marian Hill clearly understands the power of performance. Not a moment of their set is unchoreographed, perhaps giving insight as to why the duo pulled their name from two characters in the musical, The Music Man.

Transitioning into the buttery tunes of “All Night Long” off of the duos May 11 release, Unusual, Gongol glimpsed over at Davit, and playfully instructed, ”Steve”. The crowd erupted in a roar of support as Davit launched into an intricate saxophone solo. Gongol teased Davit with her sensual dancing, and Davit returned the favor. The two played cat and mouse, traveling across the stage as a pair, with Davit following Gongol’s lead. Sharply turning away as soon as Gongol began to welcome his advances, it was Gongol’s turn to chase.

The crowd is captivated by the show, and not a single body stood still within the room.

“That’s my wife up there” boldly stated a male member of the crowd.

“Same,” retorted the female to his left.

Gongol isn’t the only one who’s pulling at DC’s heartstrings. Grinning, she swiftly leaves the stage to make room for Davit’s dance routine and trumpet solo. The room exploded with cheers as Davit hammed it up, and transitioned into a booming chant of “Steeeeeeve” as the song faded into silence.

Gongol returning to the stage, the duo played “Subtle Thing”, a brand new track. Travelling from the mic stand over to Lloyd, Gongol showcased her dancing prowess even further. Leaving the stage after their most popular song, “Down”, the three left the crowd wanting more. Begging for an encore, the booming chant for Steve returns. Quite hilariously, Davit did not appear back on stage until the middle of “Talk To Me”, where his incredible saxophone skills shone.

Bowing, the final act came to a close and the crowd’s deafening cheers filled the room. Marian Hill had successfully made an average hump day an unforgettable night for their fans. With their charismatic energy and raw talent, it is only a matter of time before they become a household name.