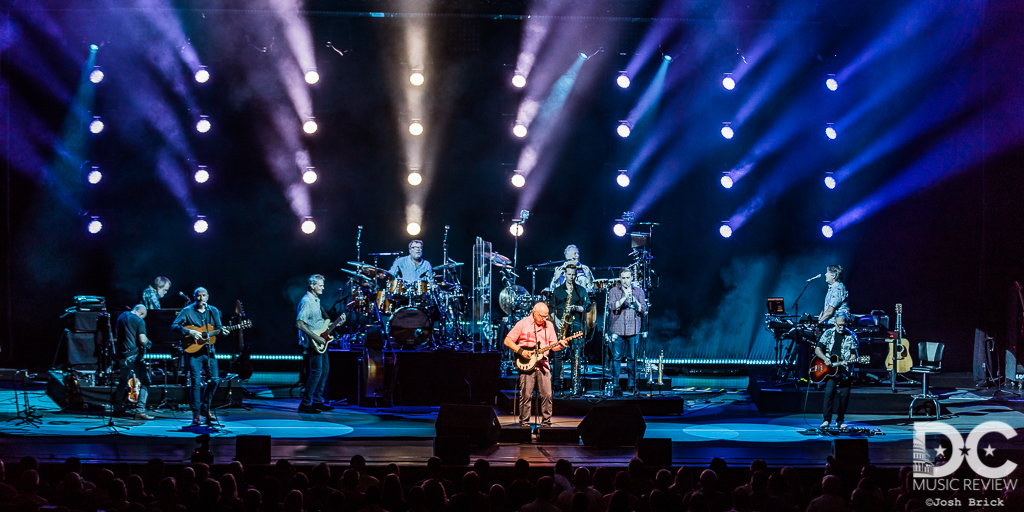 British guitar legend Mark Knopfler made a stop at the Filene Center at Wolf Trap on Sunday, August 18 to the delight of a sold-out crowd. The former Dire Straits frontman recently celebrated his 70th birthday and shared with the crowd that although he's considered retirement, he can't deny the joy he feels playing his beloved songs to adoring audiences across the world.

The singer, songwriter and poet performed for 2 hours as nearby storms lit up the night sky . Backed by an incredibly talented 10-piece band – who Knopfler claimed could play at least 49 instruments – the Scot took us on a journey of beautiful music from his expansive career. Many in the crowd were Dire Straits fans and voiced their excitement as Knopfler and band performed a measured and groovy "Once Upon A Time In the West" followed by the beautiful yet tragic "Romeo and Juliet." While Knopfler's playing may have slowed since his rockstar days, his guitar tone was immaculate as ever – proving that speed was never a factor in his guitar-playing brilliance.

Knopfler played  two songs from  his recent  release, Down the Road Wherever – "My Bacon Roll" and the nostalgic "Matchstick Man" – the latter his recollection of a hitchhiking adventure in the UK in the 70's as he embarked upon his musical career.

The crowd appreciation was palpable as the band departed the stage after a delightful set. Knopfler and his mates returned with the ever-popular "Money For Nothing" to a raucous audience response. The guitar great returned the favor to the grateful crowd with a second, two-song encore of "Piper to the End" and the fitting "Going Home" the theme from Local Hero.

Click here to see the setlist for Mark Knopfler's performance at Wolf Trap on August 18, 2019

15. Money for Nothing (Dire Straits song) Click to purchase the Wolf Trap Soundboard from MarkKopfler.com