Metric Slays a Sold Out Show at The Fillmore 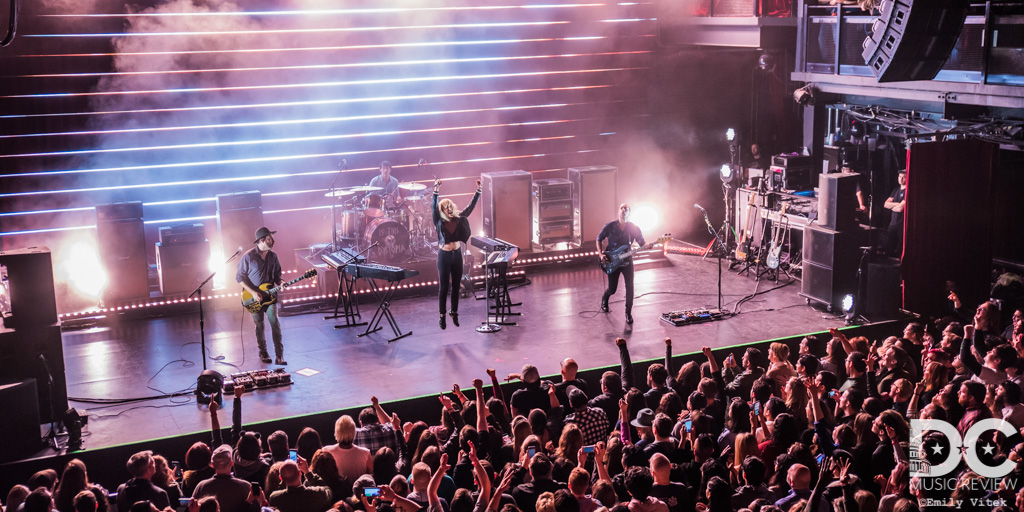 An electric anticipation filled The Fillmore on Friday February 15th as audience members began filing into a sold out venue. July Talk, a Canadian alt-rock band, got the evening started. The venue was nearly full after the theatrical set, and by the time Zoé, the wildly popular Mexican psych rock band the venue must have been at, or just under, capacity. By the time Metric took the stage, there was no way another person could fit in that room, and the excited hum between sets was buzzing more than ever. Metric showed a sold-out crowd at The Fillmore just how to open a set. With bright white light filling in from the back of the stage creating foggy silhouettes of guitarist James Shaw, singer/ keyboardist Emily Haines, bassist Joshua Winstead, and drummer Joules Scott-Key, the rock band began their epic set with a song from their September 2018 album Art of Doubt called, “Love you back.” Haines truly gave a high energy performance, some times appearing as though she was levitating above the stage, and at other times it was as though she had an invisible connection to the strums of Shaw’s guitar, or the plucks of Winstead’s bass, or the beats of Scott-Key’s drum - jumping up and down, never missing a beat.

Just as Metric knows how to start a set, they know how to put on a grand finale as well. Starting their phenomenal three song finale with, “Dark Saturday,” from their latest album, Haines truly put her whole body into this song moving with the emphatic lyrics. The audience responded, moving right along with her and the rest of the band, singing along when the mic was held out (and when it wasn’t). Ending the evening with one of their most well-known songs, “Help I’m Alive,” Haines concluded her talking points for the evening with a statement that charmingly juxtaposes her poetic lyrics, “..so steady on, don’t give up and shit.” She was speaking to the right crowd, because everyone went wild. It was a phenomenon to see everyone’s fist pulsate like a heartbeat in the air during the chorus, “beating like a hammer, beating like a hammer…”

Metric’s U.S. Tour ends in March, and they won't be back in the area, but in case anyone ventures out of the DMV, their tour schedule is here.

Click here to see the setlist for Metric's performance at The Fillmore on Friday February 15, 2019

8. No Lights on the Horizon