Moon Taxi Rocks The 9:30 Club All Day and All Night 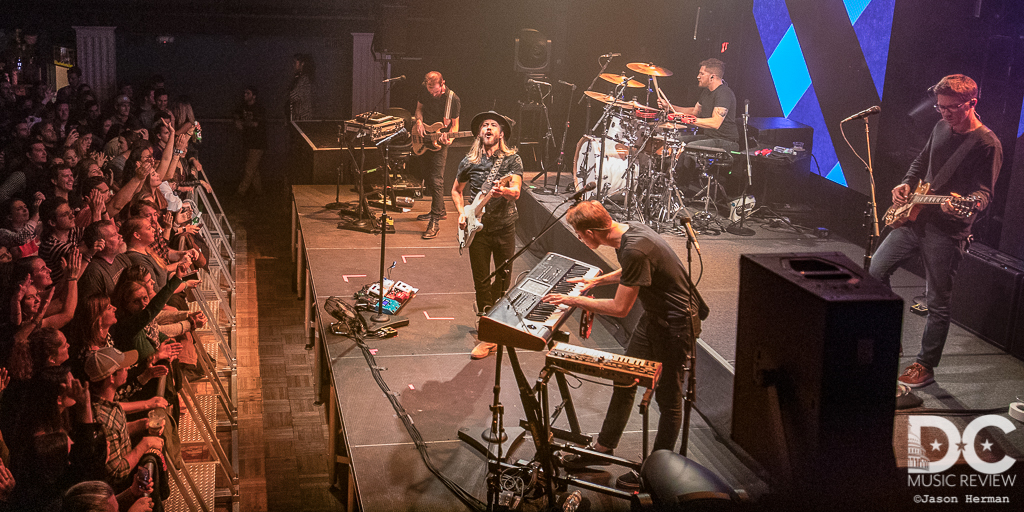 Moon Taxi was ready to give an out of this world performance to a full house as they took 9:30 Club’s stage at 7:45pm this Saturday, October 27. Launching the evening into a high energy set with “It’s Not Too Late” followed by “Let The Record Play”, frontman Trevor Terndrup oozes charisma, as he jumps about the stage with a captivating smile glued to his face. With the exception of two lyricless songs, there was not one song that was played where you could not hear the audience members belting along to. The chorus’ are so catchy that, even if one didn’t know the song, by the end of the second chorus they’d be able to belt out along with everyone else. “We’re excited to be back here at 9:30 Club, one of our favorite spots to play,” Trevor revealed to the audience. “You know, we love Washington, D.C. We museum'd it up today, feeling very patriotic,” at this the audience cheered, and the band played “Meet Me In The Middle,” followed by “Make Up Your Mind”, where keyboardist Wes Bailey got so wholly into a solo - headbanging, arms moving impossibly fast along the keys - that he had the audience roaring. The band’s excitement was infectious. Mid-set, the band went full on jam band, and started on an about ten-minute lyric-less session with some epic guitar solos from Trevor and guitarist Spencer Thompson. At first, the audience might have been a little confused about the song, but it was a spectacle to watch and to hear and to feel. You could see the band vibing, getting into the music, and it would’ve been hard as an audience member not to join their rhythm. Of course, the engagement is held secure by Trevor’s animated hair flips, exuberant solos, and by his pointing to audience members for photos and videos. At the end of the night, there were comments from audience members about making eye contact or, “getting the point,” from the frontman. It’s so apparent that all of the band members love what they do, and the audience positively responds to it with equally high energy. We’re excited to be back here at 9:30 Club,
one of our favorite spots to play...
You know, we love Washington, D.C.
We museum'd it up today, feeling very patriotic

Keeping the audience on their toes, Moon Taxi not only played at least one song from every album, but the introduction to “River Water,” the 8th song in the set, was somewhat of a mash-up  of the famous Earth, Wind & Fire song, “September,” which will be celebrating its 40th anniversary this coming November.

Soon an unforgettable cover of The Beatles’ “Eleanor Rigby,” in which every member of the band except drummer Tyler Ritter left the stage. He drummed along to an electronic mix of the song, with a tremendous collaborative light show from 9:30 Club. Next, the band jumped back to their first album Cabaret with “Mercury,” a fan favorite. While bassist Tommy Putnam missed his solo opportunity during this song when his bass came unplugged as he walked over to the side of the stage to get closer to the audience on the balcony, he made up for it during “Red Hot Lights.”

After “Year Zero,” Trevor handed his pick to an audience member in the front, and the band silently left the stage. The lights went dark, and everyone knew they couldn’t possibly be finished, but still the hopeful chant, “we want more,” started from the back, making its way to the front of the audience, and eventually, everyone was chanting. Cheers erupted as the band bounced back on stage with a guest performer, Mike Wilbur, from opening band, Moon Hooch. After introducing their guest they promptly queued the catchy riff for chart-topper, “Too High,” and the audience exploded. By the time the chorus came around, there was not one person who didn’t have a hand, or both hands, up. When Wilbur blasted out the horn part, the audience danced even harder. At the end of the song, Tommy and Wes gave out set lists to audience members. The audience left on cloud 9 with an excited light in their eyes.

Hi from @930club where we are playing again tonight

thanks for coming out, dressing up, and singing with us last night #halloweekend