Nancy Langhorne Foundation is Putting the Fun in Fundraising 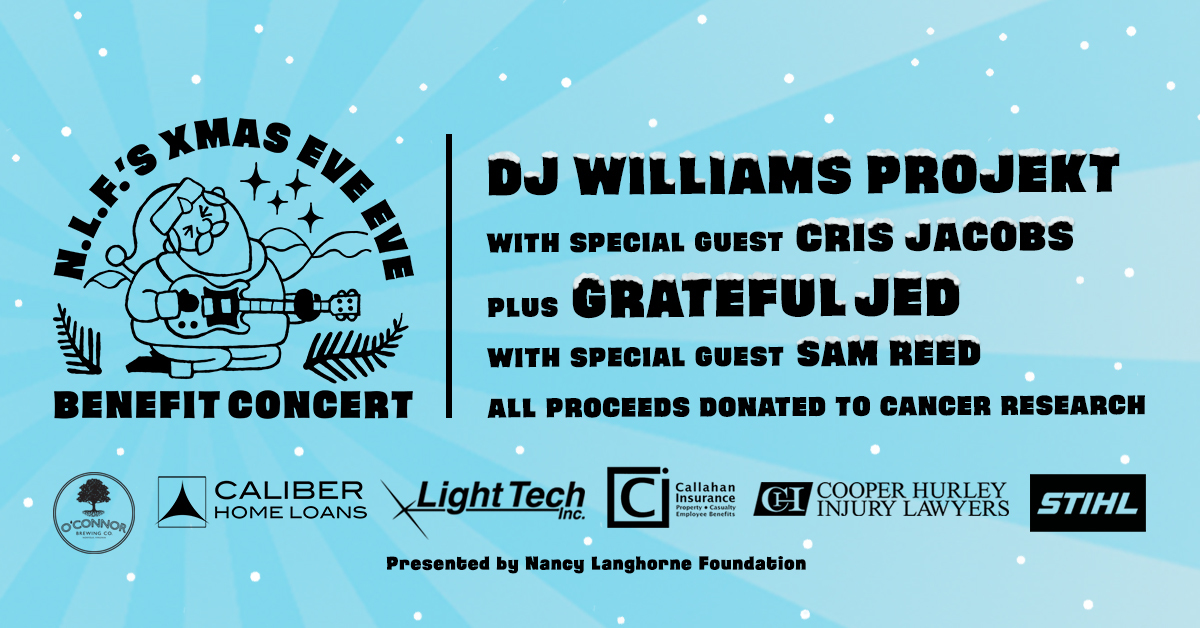 The holidays are a time for giving and the Nancy Langhorne Foundation is providing everyone with a chance to support cancer research while thoroughly enjoying themselves with great suds and music. Once again, the award-winning O’Connor Brewing in Norfolk, VA, will be hosting the third annual Xmas Eve Eve benefit concert. Music will begin with Norfolk locals Grateful Jed celebrating the music of (you guessed it!) The Grateful Dead with guest vocalist Samantha Reed who frequents the stage with No BS! Brass Band and Keller Williams Grateful Gospel. Richmond’s own DJ Williams Projekt will be headlining the night and filling the air with their soulful, jazzy funk which will be kicked up a notch with Baltimore blues shredder Cris Jacobs as a special guest. A stellar lineup like this is enough to fill up most any venue, but the folks at the Nancy Langhorne Foundation have wrangled up quite a few pieces of music memorabilia and other prizes that will be getting raffled off at the event to give back to those who have helped their cause. There will be signed items including a Flaming Lips album signed by Wayne Coyne, Karl Denson’s Tiny Universe album, a framed Billy Strings print signed by the whole band (with a bonus signature of soundman Andy Lytle), a signed copy of Todd Rudgren’s new book, and more! There will be live shirt printing by Hotbox RVA, so you can get your choice of color and print style custom made. Food trucks that will be serving up delicious eats will be Yolees’ G-Dawgs & Catering Co. and The Bumbling Bee Vegan Junk Food. The official after party will be hosted by Cogan’s Pizza, a long time Ghent staple for delicious slices of pie and 33 draft beers.

The past two year’s events have raised over $20,000 for cancer research which has been donated to Eastern Virginia Medical School, the Medical College of Virginia in Richmond, and the Sloan Kettering Center in New York. Over 400 people joined the party last year, so it’s expected that the house will be just as packed this year. This is a 21+ event, so find a sitter for the kids. Tickets bought online include a free raffle ticket and there’s discounts on bulk ticket buys for friends and family. Doors open at 6:30 and music starts at 7:00 sharp. There’s no better way to rock in the holidays than this fun event!