New Mastersounds Funk up the DMV 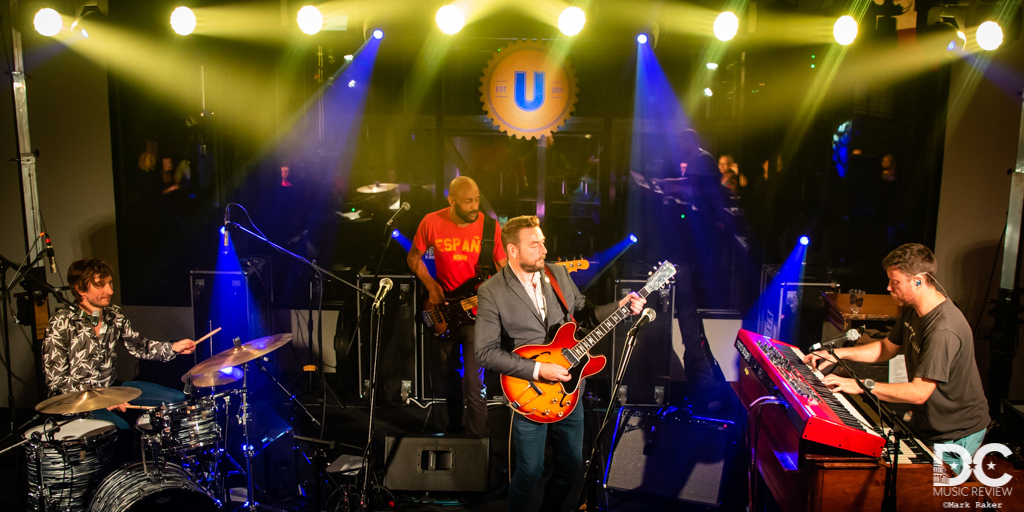 The New Mastersounds (NMS) took the stage at Union Craft Brewing, last week on May 8. New Mastersounds is celebrating their 20th anniversary, formed in Leeds, UK, in 1999. Approximately 400 people came out on a Wednesday night to listen to and experience the full range of funk, soul and jazz sounds of NMS. They started the show with “Take What You Need,” which first appeared on their 2008 album Plug and Play. Throughout the night, NMS showed why they have been popular around the world for so many years. During the first set they played old favorites “Give Me A Minute,” which was released as a single in 2004 and “Six Underground” from their second album Be Yourself, which came  out in 2003. The album Be Yourself allowed NMS to follow the path of Eddie’s musical influences and experience and really be themselves.

The first set ended with the soulful voice of Lamar Williams Jr singing the title track of their new album, “Shake It,” which was released in a single a last week during New Orleans JazzFest where they played a number of shows. The second set opened with “Kings and Queens”. This set was also a mix of new and old music.

Lamar Williams Jr. sat in with NMS in 2018, the chemistry was obvious and the fit was great. In addition to joining the 2019 tour, Williams will be on the new album Shake It which was recorded in Denver.  Lamar has also sat in with The Allman Brothers Band, Oteil and Friends, and was the lead singer of Les Brers.

Shake It, will be out September 13 on Eddie Roberts’ Color Red label and can be preordered now at  http://bit.ly/CRED-ShakeItPreorder  In advance of the record, NMS have shared the record's first single, "Let's Go Back (feat. Lamar Williams Jr.)" and you can listen here: bit.ly/CRED-lets-go-back. It's currently available on all DSPs including Spotify, AppleMusic and YouTube. Check out last years (November 2018) studio album, The Nashville Session 2 and the The New Mastersounds live from Paste Studio NYC May 16.

It was hard to tell who was having more fun - the band or the audience; Roberts said everyone was having a great time, but it might be the band as well. He went on to say - “We have had such a great time here. Union Craft Brewing is a beautiful place. It has been such a blast. Everyone here is great and they have taken such good care of us. I’ve been beer tasting all day and hasn’t affected my playing, well maybe it made it a little better - a little more fluid. Thanks to all the fans who came to see us tonight.  I love that people travel so much in this area. Now that I’ m a DC native, I’m starting to realize that everyone jumps around between DC, Baltimore and even Richmond. I'm very happy to be living around the parts with so many faithful funky followers of the music.” ​Union Craft Brewing's new facility, which opened in 2018, is designed for concerts as well as just hanging out. It is family and dog friendly. The fans were drinking excellent beer served by a knowledgeable attentive crew who were clearly enjoying the show as much as the patrons.

The summer tour continues up the east coast and beyond, including May 17-18 at the Brooklyn Bowl. June 7-8 Central Jazz Festival In CO,  July 4 NMS will be playing High Sierra Music Festival 2019 in Quincy, CA. They will also be heading back to Leeds, UK this September for a dual 20th anniversary party at The Wardrobe. The next chance to see NMS in the area is July 11 at the Union Stage at the DC Wharf and the 13 at The Ardmore Music Hall in PA.