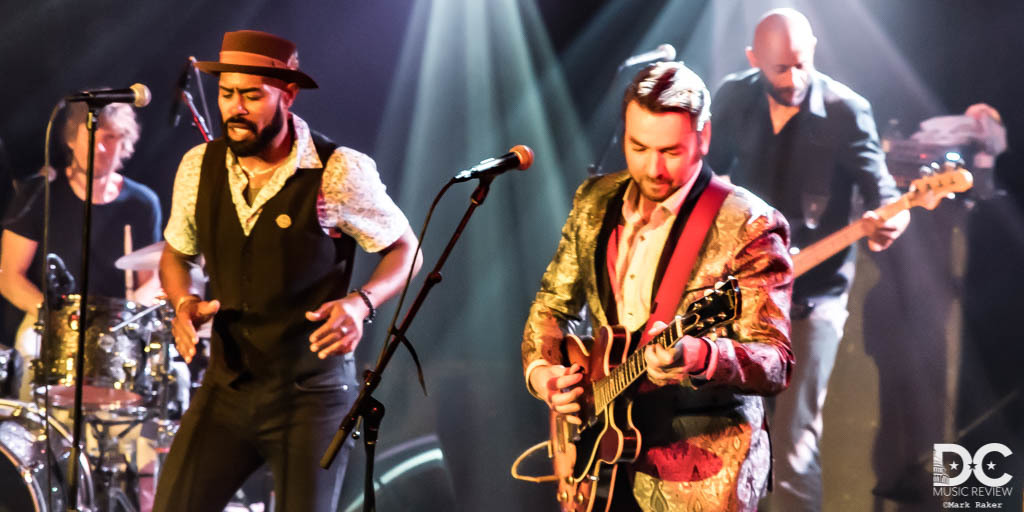 The New Mastersounds  formed in Leeds, UK is continuing their 20th anniversary celebration tour. On July 11th, after touring the United States for the past few months, The New Mastersounds brought their bluesy funky jazz beat back to Washington DC’s Union Stage. The New Mastersounds'  set started around 10 with an introduction, which we were told was British for hello. The band “played a blinder” with a show that went until after midnight. Not only did they sound great they looked good as well with Eddie Roberts wearing his new sparkling jacket  acquired for their recent High Sierra Fest gig) which was accentuated by the light show. Lamar Williams Jr. who sat in with NMS in 2018 and is part of the 2019 tour. Williams is on the new album Shake It due out on September 13. In addition to playing with NMS, Williams was the lead singer of Les Brers. He also sat in with The Allman Brothers Band, Oteil and Friends. The multi-generational crowd was well represented by younger fans. NMS kicked off the show with Shake It, the title song on their upcoming album, which lead into the just released Kings and Queens. They didn’t slow down to take a breath until after they played Trouble. One of the great things about NMS is the versatility of song styles. They may be the only band in history to play what Roberts described as Disco Jazz as well as a soft reggae song in the same set. Even Roberts’ broken string didn’t stop the jam. While Roberts changed the string Allen began playing One Note on the drums, one of the first two songs that they released in 2000. The rest of the band joined in for a seemingly impromptu jam intro and then they played a version of One Note, that shows why they have the staying power to entertain audiences for 20 years.

Roberts, who currently calls DC home, said “It's so much fun playing on the new vibrant DC Wharf - good people, good food, beautiful surroundings. The whole band had a blast from the moment we arrived.”

The summer-fall tour continued in New York at Rocks Off concert cruise and the Ardmore Music Hall in PA. In August and September they head back across the pond to play in Spain and the UK, playing in both London and Leeds. The Leeds show is a dual 20th anniversary party at The Wardrobe.

They don’t have any shows scheduled in the DC area yet but hopefully they will be back before the end of the year. While you wait to see them live…

In advance of the record, NMS have shared the record's first single, "Let's Go Back (feat. Lamar Williams Jr.)" and you can listen here. Another song from the album Kings and Queens was released on the Eddie Roberts’ Color Red Label last month. Check out last years (November 2018) studio album The Nashville Session 2, and three songs from Shake It on The New Mastersounds live from Paste Studio NYC May 16. NMS albums are currently available on all DSPs including Spotify, Apple Music and You Tube. Shake It, will be out September 13 on Eddie Roberts’ Color Red label and can be preordered now.

Gordon Sterling and the People started the night’s funk off when they took the stage at 8:30.

The DC area is lucky that they call it home. Gordon Sterling who is originally from Queens and has lived in the DMV for over a decade said “DC is showing the guys from across the pond big love tonight. You guys showed us big love during our set. In DC, at every show, there are always people from other bands who come out to hang out and see their friends and fellow musicians. I love how the scene supports each other. Let’s keep doing it, don’t mute DC.”

The band includes: Gordon Sterling (Vocals/Guitar); Mary-eL (Vocals); Gena Photiadis (Keys/Vocals); TJ Turqman (Bass); Adam "Snaxx" Orlando (Drums).  They describe themselves as an eclectic blend of psychdelia and soul with a touch of bluesrock. The band has an EP that will be released in the fall.

Enjoy the photo galleries of The New Mastersounds and Gordon Sterling by our photographer Mark Raker.

Click here to see the setlist for The New Mastersounds' performance at Union Stage on July 11, 2019