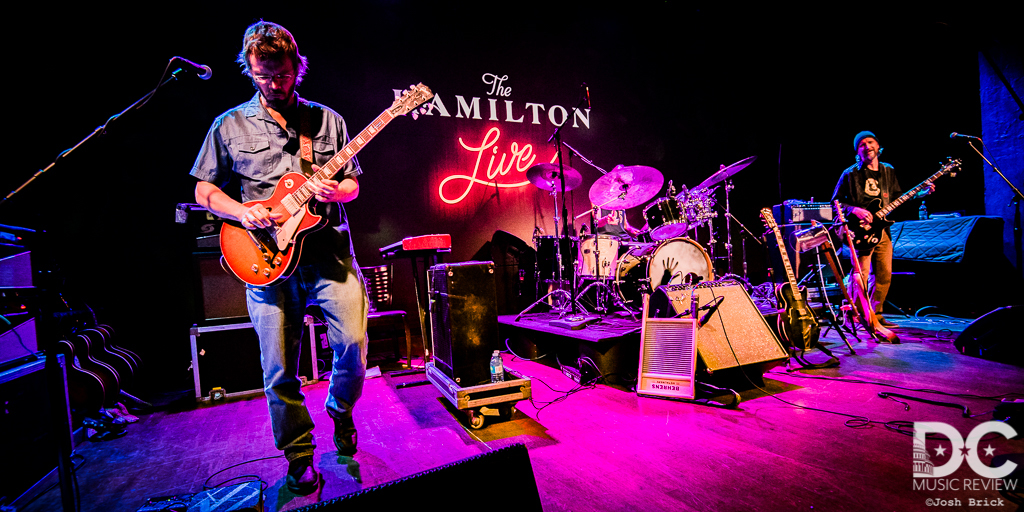 Blues-rock trio, The North Mississippi Allstars (NMA) returned to DC on Wednesday, November 13 for a rollicking night of music mastery. Brothers in music and by blood, Luther (guitar, vocals, keys, drums) and Cody (drums, vocals, guitar, electric washboard) showed a near sold-out crowd why they have earned the respect of fans and musicians alike throughout their 20+ year careers. Joined by bassist Jesse Williams, the trio displayed both power and precision for more than three hours to the delight of the DC faithful. Luther began the show solo with his acoustic for several tunes including "Lonesome In My Home" by one of his musical mentors, Junior Kimbrough, and had the undivided attention of the entire room at The Hamilton. After a few acoustic numbers, Cody and Jesse emerged and the band launched into "Goin' Down South" from the band's debut album, Shake Hands With Shorty. Luther primarily alternated between his Fender Telecaster and Gibson Les Paul throughout the night, consistently wowing the audience with his thick tone and distinctive and funky playing style.

The band is touring in support of their recent release, Up And Rolling, and treated us to several tunes from the album which the band dedicated to their musical heroes growing up including their father and producer Jim Dickinson, R.L. Burnside, Jack Rose and Jim Fahey among others. Always evolving, NMA is able to find balance between paying respects to past greats while simultaneously testing the limits and pushing boundaries with their sound. Luther in particular held nothing back throughout the evening and humbly showed off his serious guitar chops, at times with his signature slide playing doused in southern soul. Cody Dickinson on the electric washboard

NMA treated the crowd to a fantastic "Mean Old World" by T-Bone Walker that featured Cody on drums and washboard simultaneously. A sign of things to come, Dickinson took his place at the center of the stage for a rousing washboard exhibition on "Psychedelic Sex Machine," complete with wah, delay and looping effects as  Luther manned the drums. The show was definitely up and rolling as the trio played on for more than three hours overall, leaving it all on stage. The trio finished off with a fitting R.L. Burnside-penned"Po Black Maddie" > "Skinny Woman" sandwich to close out the marathon set that had a bit of everything North Mississippi All Stars.