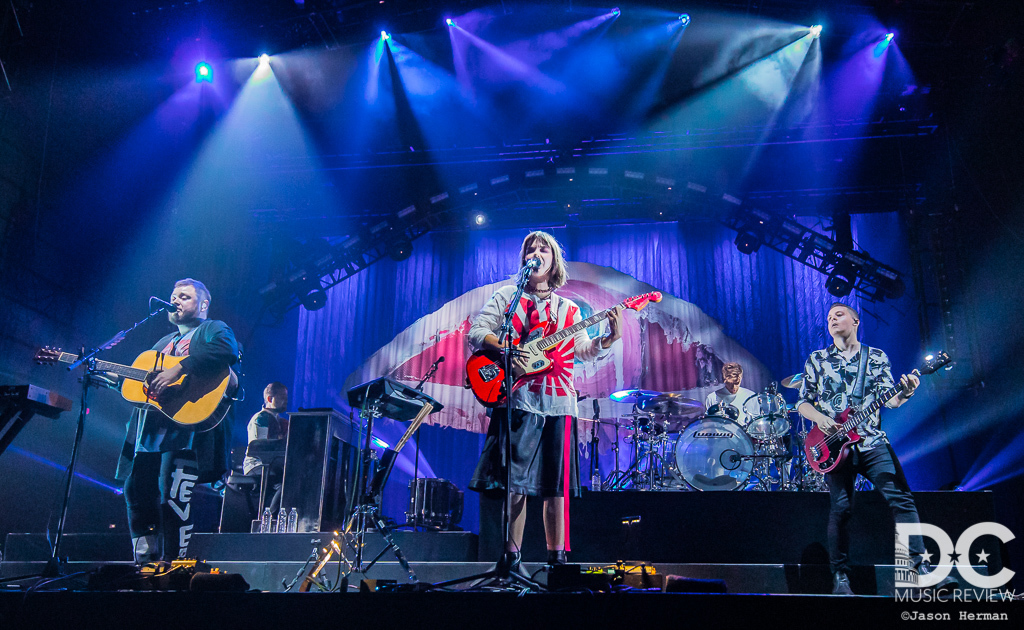 Of Monsters and Men launched their FEVER DREAM tour on a hot summer night at The Anthem on September 4th. Having released their third album Fever Dream earlier this summer, the band was motivated to wash ashore North America and stake their rightful claim of one of the hottest bands on the planet.

Comprised of guitarist/vocalists Nanna Hilmarsdóttir and Ragnar Þórhallsson, guitarist Brynjar Leifsson, bassist Kristján Páll Kristjánsson, and drummer Arnar Rósenkranz Hilmarsson, OMAM has come a long way since winning a battle of the bands contest back in 2010. Nearly a decade later, the Icelandic indie folk group has earned over 1 billion streams on Spotify and their music been featured in popular shows and movies including The Secret Life of Walter Mitty, The Hunger Games: Catching Fire, and The Walking Dead.  Back in 2016, the band members even had a cameo appearance in an episode of Game of Thrones. Nanna Hilmarsdóttir was everpresent - even in silhouette.

Even before the band took the stage for their DC performance, we knew how prepared and intent OMAM was to make this their most impressive tour to date.  There were not one, but three tour gear trailers outside the venue with their contents set up inside. OMAM is no stranger to Washington DC, as they first performed in 2012 at The Black Cat. In subsequent years they have since played for fans at Echostage and at a sold out-show at the 9:30 Club. The night of this particular performance, there was a palpable energy in the air and the thousands that gathered at The Anthem knew it - Of Monsters and Men took their place as monsters of music.

Nanna Hilmarsdóttir was everpresent - even in silhouette.

Like so many people from around the globe travel to OMAM's native Iceland to seek out and witness the Northern Lights, fans from across the region made the pilgrimage to The Anthem to see a band whose stage presence is much like the Northern Lights - etherial, breathaking, stunning, and envigorating.

Before OMAM took the stage, Baltimore's very own indie rock band Lower Dens took to the stage. Celebrating the recent release of their fourth album The Competition, the celestial trio performed a 45 minute set to prepare the audience for a night of great music.

As OMAM took to the stage at 9:00 PM the venue continued to fill and the audience drew closer to their beloved band. They opened the set with "Alligator", their first single off Fever Dream  which was quite the explosive first song to start the evening off with!

"Wake me up, I'm fever dreaming

Shake it out, it's just what I'm feeling

// "Alligator"  by Of Monsters And Men Nanna Hilmarsdóttir and Ragnar Þórhallsson of Of Monsters And Men

From the opening notes it was apparent that the band had practiced and prepared for their conquest of North America - the band was as tight and energetic as ever.  Although the evening concentrated mostly on songs from their latest album, they gleefully performed songs from their entire catalog, including those from their 2015 album Beneath The Skin and their 2012 debut album My Head Is An Animal. Nanna Hilmarsdóttir and Ragnar Þórhallsson of Of Monsters And Men Throughout the evening Nanna Hilmarsdóttir and Ragnar Þórhallsson took turns singing as they weaved a delicate vocal fabric as drummer Arnar Hilmarsson drummed with the vigor of a nordic warrior longship drummer urging & encouraging everyone in the room to row this musical ship to shore with in intensity rarely seen. It is not until you witness Of Monsters and Men live that you understand the sheer energy of Hilmarssonand his drums offset by Nanna and Ragnar beautiful soft vocals intertwine, and all the while delicate notes of the keyboard and guitars peak though the silent spaces left in between.

After performing several songs from Fever Dream the band decided to energize the audience with "Lakehouse" and as the tempo and energy couldn't get more frenetic the confetti cannons on each side of the stage went off filling The Anthem with an infectious joy.  Confetti still slowly came back to earth, Of Monsters and Men made sure that the energetic dance party would not end as they launched into fan favorite "Little Talks" and then ended the performance with "Six Weeks". We could not have thought of a stronger way to end the evening. If the main performance was not enough, Of Monsters and Men treated The Anthem to a four-song encore. Hilmarsdóttir thanked the audience for a special evening for the band, as it was not only their first stop on tour but that many of the songs were performed live for the first time that evening. To end the evening on a special note, the band performed "Yellow Light" from My Head Is An Animal which had not been performed live since 2016. As the band took their bow, you could see in their expressions how special the performance was to them. As many crowd members held their phones out to get one last photograph of OMAM, the band members took out cameras to in turn photograph the crowd.

Just like the Northern Lights - Of Monsters and Men came to The Anthem for only a few hours, dancing in front of us with their breathtaking brilliance before disappearing once more into the night. If the rest of the tour is anything like their kickoff date in DC, there is no doubt that the FEVER DREAM tour is going to be a memorable one. We fully expect the band's intensity and polish to continue through their closing date on September 28th in Vancouver, BC. Click here to see the setlist for  Of Monsters And Men  performance at The Anthem  on September 5, 2019