of Montreal Transforms the 9:30 Club Into A Magical Fantasy Playground of Sights and Sounds 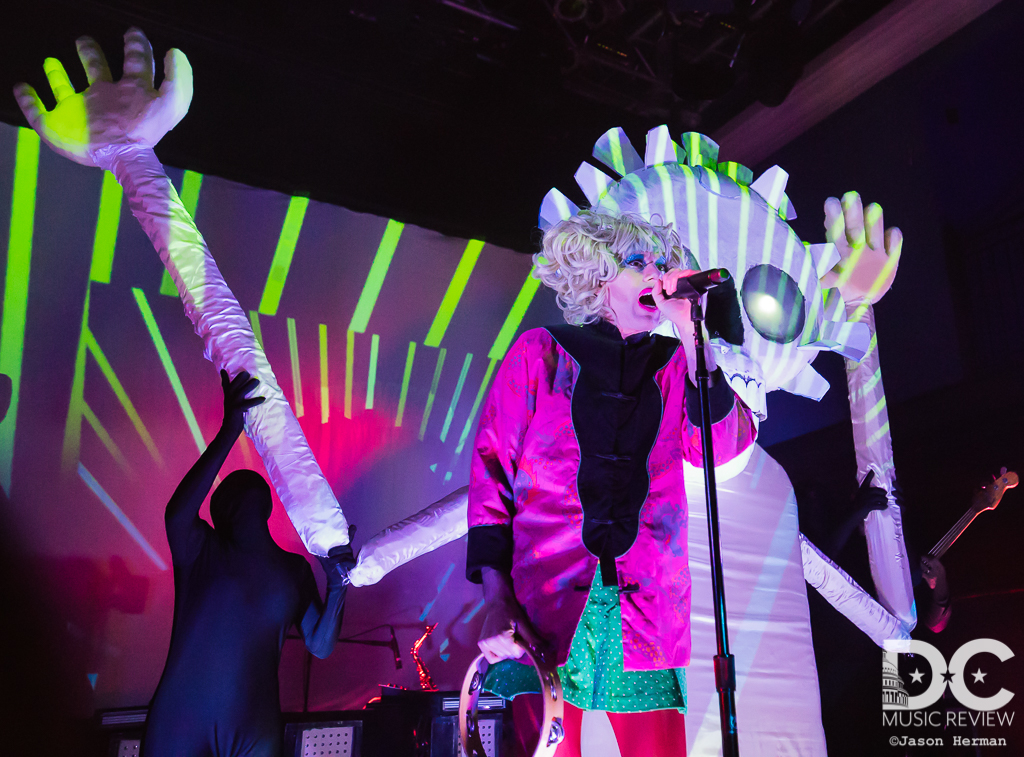 When the room darkened and the background music cut out, the brief silence was met with shouts of excitement in anticipation for of Montreal. Four smartly dressed men took their places on stage and cued up for the opening song with synthy ethereal tones that had the crowd pushing closer together and toward the stage. From stage right emerged a larger than life skeletal puppet, the first of numerous imaginative creations that night. “Grolandic Edit” kicked off the set, the easily recognizable beat striking a chord with concertgoers as they erupted into applause. Right on cue, the supremely talented, highly intriguing, and stunningly dressed frontman Kevin Barnes (singer, multi-instrumentalist, songwriter) skipped out on beat, taking his place in front of the festive puppet. His outfit explained the eclectic dress of some of those in attendance. Dressed in drag and a full face of makeup, Barnes was a vision in pink.

The band ran with their 80s vibes with “Paranoiac Intervals/Body Dysmorphia” which was embellished by dancers who wouldn’t look out of place in an aerobic workout video from the 80s (save from their masked orange faces and silver jumpsuits). Barnes led the crowd in a workout of their own, with jumping jacks, all the while performing with immaculate grace and talent, his voice unwavering and powerful.

of Montreal are an energy infused explosion of color, peppered with psychedelic influences that transformed the 9:30 Club into an ultra manic and wild dance party. Their live performance challenged the limits of the imagination, incorporating costumes, props, graphics, and sounds that bent the rules of reality. Although the band has seen turnover in the past, their current line-up is made up of Clayton Rychlik (drums, keys, guitar, bass), Jojo Glidewell (keys), Davey Pierce (bass), Bennett Dean Lewis (keys, guitar). Each song got more extravagant, more decorated, and definitely sexier, the venue getting steamier and more tightly packed as the night went on. Concert-goers who I may have mistaken for shy and reserved prior to the show, morphed into silly and loose fans, letting go as they let the tunes consume them. The Georgia-based band played a setlist that was a happy blend of tracks from albums ranging to 2008’s Skeletal Lamping, to their most recent EP release, White is Relic/Irrealis Mood (2018).

“Plateau Phase/No Careerism No Corruption” combined electronic, rock, and psychedelic funk all in one, making the live version feel like a remix of their recorded track. The performance was so intense it felt like a song fit for an intergalactic battle. For Barnes’s third costume change of the night, he donned a white gown and a straight blonde wig, giving him the appearance of a futuristic angel. Covering Bonnie Beecher’s “Come Wander With Me,” Barnes took down the tempo. Belting the romantic lyrics, the performance was stunning, and felt almost spiritual. The final notes were met with a roaring applause louder than I thought a 1200 person capacity venue was capable of.

The party continued with “Soft Music/Juno Portraits Of The Jovian Sky,” which Barnes kicked off by ripping off his white gown to reveal a colorfully psychedelic, body-clinging leotard, performing the remainder of the main set with unbounded energy. When the band left the stage in preparation for their encore, the backup dancers took over, wordlessly leading the audience in an arena style cheering competition, motioning their puppet coated felt hands (paws? fins?) at the crowd, garnering ear-shattering cheers. When of Montreal bounded back on stage, two dancers leaped into the crowd surfing atop eager hands, as the band performed “Gallery Piece.”

“Let’s Relate” was the final song of the evening, during which Barnes celebrated the evening by stripping down to just his underwear. The live performance of this song was an interpretation I’d never heard before, but the electronic elements, combined with the patriotic graphics, costumes, and confetti cannon, made it a song to remember. Confetti canons being shot while the devil rides on the back of a glowing monster! Nothing is out of the realm of the imagination at an of Montreal Concert.

Confetti canons being shot while the devil rides on the back of a glowing monster! Nothing is out of the realm of the imagination at an of Montreal Concert.

For a solid 90 minutes, I was entranced, under Barnes’s spell. of Montreal are an audio-visual sensory overload of a trip, during which to blink is to miss out. They require and command every ounce of attention you have. You’ve never truly experienced of Montreal until you’ve witnessed a live performance.

of Montreal’s recorded sound is like a cousin twice removed in comparison to their live performance — you can hear the likeness, but the resemblances cease post surface level. Their live performance is an electric combination of Fantasia (1940) and Mary Poppins (1964), but rather than dancing penguins, you’re treated to a larger than life puppet show starring “Tiger Man” and “Dolphin Boy.” In short, you never know what you’re going to get, but you can bet it will be an indescribable and wild adventure.

You have to see it to believe it.

7. Sophie Calle Private Games / Every Person Is a Pussy, Every Pussy Is a Star!

8. It's Different for Girls

9. Plateau Phase / No Careerism No Corruption

12. For Our Elegant Caste

15. A Sentence of Sorts in Kongsvinger

1. First Half of Song Only

of Montreal is currently touring in support of their latest EP, White Is Relic / Irrealis Mood released on March 9, 2018.