Oh, It’s So Heavy: Tedeschi Trucks Band Plays On in Honor of Kofi Burbridge in DC 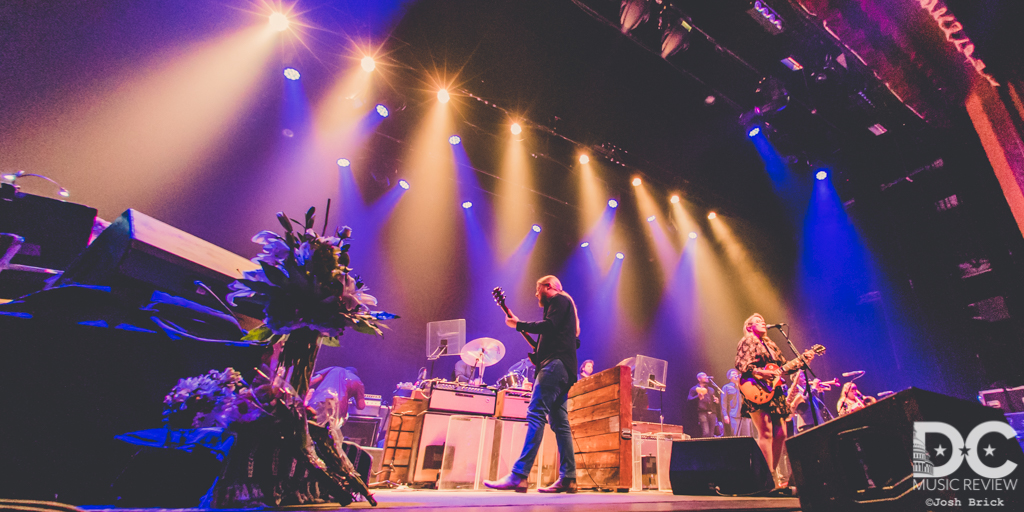 The Tedeschi Trucks Band (TTB) played a pair of emotional shows in DC this past weekend after learning of Kofi Burbridge's untimely passing at age 57 on Friday, February 15. On the day their new album, Signs, was released – the band experienced heartbreak due to the loss of their friend and musical brother. The band's original keyboardist (and flautist) and DC-native, Burbridge faced serious health issues in the summer of 2017 when he underwent emergency heart surgery. He rejoined the group on the road that fall and toured with them through 2018 until it was announced that Gabe Dixon would fill in for him early this year as Burbridge faced further complications.

TTB took the stage at the Warner Theatre at 8:40 to the concern of some fans who had heard unconfirmed reports of Kofi's passing. The band displayed an unmatched show of strength to play on in honor of their fallen brother that included the performance of the entire new record to open the show. Derek Trucks, who created beautiful music with Kofi for more than 20 years, delivered a stunning rendition of "Midnight In Harlem," complete with a jaw-dropping solo that left the crowd in awe. The band opted to forgo the planned set break and play straight through, considering the circumstances. Improbably, the 12-piece powerhouse opted to perform "Space Captain," written by Matthew Moore and made popular by the great Joe Cocker in 1970. It's a tune that Kofi played many times with Tedeschi Trucks Band and was a major contributor to. Susan Tedeschi was visibly hurting on stage but sang on in a gorgeous tribute to her friend. Hugs and tears were shared by friends after the show, many at a loss for words and grief stricken. With extremely heavy hearts, TTB returned to the stage on Saturday to deliver a spectacular and emotional tribute to Kofi. In a stunning display of professionalism and mental strength, each band membered stepped their game up in a huge way. The group even tackled "Idle Wind," a song that took us on a serious journey of emotion; a song that Kofi shined on each time he played it. On this night, Derek stood out, playing his Gibson SG with a fire and passion that nearly tore the roof off the historic theatre. One of the many highlights included an unforgettable rendition of "The Sky Is Crying" that included blistering solos by both Susan and Derek that left the crowd stunned once again. The band proved that they will overcome with one of the most memorable Tedeschi Trucks Band performances I have ever witnessed. The sky was crying in DC for Kofi Burbidge.

Tedeschi addressed the crowd after the show, thanking them for their support during a dark time. She assured us they will return this weekend to again deliver two more historic shows at the Warner, a venue now cemented in the band's history.

We will miss Kofi Burbridge for his musical contributions to the world, as well as the love and friendship he shared with friends, family and fans. He was a music genius and an irreplaceable soul. The music world grieves together at his devastating loss. More Coverage At The Warner Theatre