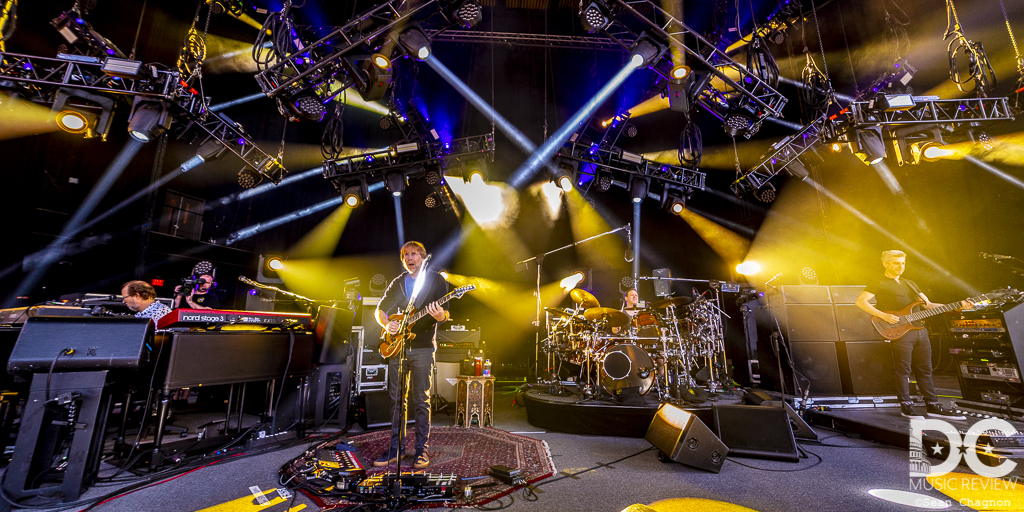 There's a mantra among fans of the Vermont-born jam band Phish that you should "never miss a Sunday show." In the band's 36 year history, they've played countless stand-out shows at the end of the weekend, when many fans chose to stay home and rest up for the work week. In recent years, this credo has been proven time and again when Phish makes their nearly annual summer stop at Maryland's Merriweather Post Pavilion. During their summer tours of 2014, 2015, and 2018, the band has offered up stellar performances over two nights at the legendary amphitheater, so fans were eagerly anticipating another double-header during the band's brief summer tour through the East Coast and Midwest. Just a week and half into their tour, and following an outstanding Friday night performance in Charlotte, NC, Phish rounded into mid-tour form just in time to treat fans in the DMV to another duo of memorable concerts, with impressive jams and exciting song selection abound.

Unlike in previous summers, when Phish swung through the mid-Atlantic in late July or August, the band arrived in the region with a perfect weather forecast: mid-80s and clear skies. Fans arrived as soon as parking lots opened to set up an open market for tailgating, full of fan-made merchandise, food, beer, and other pre-show essentials. As the sun started to set over Merriweather's western gate on Saturday evening, the sold-out crowd poured into the venue to stake out space on the chairless, brimming lawn. The band kicked off their two-night stand with the title track off their last album before a 5 year breakup, "Undermind." This marked the first time that the song opened a show and set the tone for a laid back set where the band settled in with excellent song selection and several moments of outstanding improvisation. Continuing a trend on the band's summer tour, Phish also debuted "Friend" from Trey Anastasio's recent album and tour, Ghosts of the Forest, which also included drummer Jon Fishman. The Ghosts tour appears to have set Phish up well for this summer tour, as both Anastasio and Fishman are well-rehearsed and showing incredible chemistry during their jams. The first spontaneous, creative moment took place in "No Men in No Man's Land," when guitarist Trey Anastasio teased the melody of Violent Femmes' "Blister in the Sun," eliciting some cheers from the crowd before bringing the jam to an exciting peak before the dust settled.

The band's connection during improvisation was outstanding throughout both shows, creating a ton of highlights scattered throughout the band's four sets. The second set opening "Ghost" on Saturday provided moments where each member of the band offered unique leads and pushed the jam in different directions. This trend was especially evident in the second set of the Sunday show, when Phish played a six-song set that began with nearly 40 minutes of improv as the band segued seamlessly between songs.  Kicking off the set with a cover of Talking Heads' "Crosseyed and Painless," keyboardist Page McConnell launched the jam into space. Bassist Mike Gordon led the next jam out of "Everything's Right," which culminated in excellent full-band interplay. Perhaps the most exciting section of improvisation on the night came from the Ghosts of the Forest tune, "Ruby Waves," in only its second performance by Phish. When Phish has new material to work with, the possibilities seem endless, and this upbeat rocker surprisingly served as a launchpad into a psychedelic exploration and arguably the best jam of the night.

Almost as if to put an exclamation point on the weekend, the band played "Maze" as their encore. This marked the first time in the bands long history of performing the song that they have placed it in the encore of a show. But if that wasn't enough, they followed it with three additional songs, ending the night at an energetic peak by rounding things out with "Wilson."

Phish continues their summer tour with stops in the Northeast, celebrating July 4th weekend at Fenway Park, before wrapping up at Alpine Valley. Trey Anastasio will return to the region, though, performing two nights at LOCKN' Festival with Trey Anastasio Band and a special collaboration set with Tedeschi Trucks Band before closing out the summer with Phish at Dick's Sporting Goods Park near Denver. When you perform in the heart of the Chesapeake Watershed, local phans make their opinion known.

11. Silent in the Morning

7. Backwards Down the Number Line >

I’ll make it quick - today’s key to the universe, via bass notes. I’ve said for years that music is balancing acts, for it to become religious. I changed my mind!! Like balancing melody (being free) and oomph (grounding things). Now I realize it’s both always, no balancing required. Bassists want more punch and oomph even in their first high school bands, so how in the world can someone like Phil Lesh have so much oomph while being so free and melodic always? Today, after a day and a half of Phish jamming, in the middle of a jam I realized it’s not by balancing those things! It’s by having both fully, always. Every single note has oomph, whether it’s going up or down from the last one, no matter what part of the scale or the bar, whether it varies or not from all the other patterns, whether the music and lyrics that set it all up feel fresh or something that’s happened before — and every note and phrase has melody, too,100%. It doesn’t matter WHAT you’re playing, especially when there are deeper intentions, like oomph, melody, flow, joy, nirvana, anything that connects you with Mother Earth, that which is primal. Thirty-six years of jamming doesn’t hurt this equation, though it happens with my other band, too! I can’t believe the two incredible John/Jons I get to play with as drummers - Fish practices eight hours a day, and his drumming is absolutely, absolutely a wave like a surfer would ride upon, flowing in gorgeous polyrhythms, smashing against the Oahu shore. After all these years I do not believe I get to surf on that rhythm, allowing oomph and melody when the bass will play itself like it did this afternoon. - Mike™

Musings about this past weekend.