Phish Returns to the Mothership: 3 Nights at Hampton Coliseum 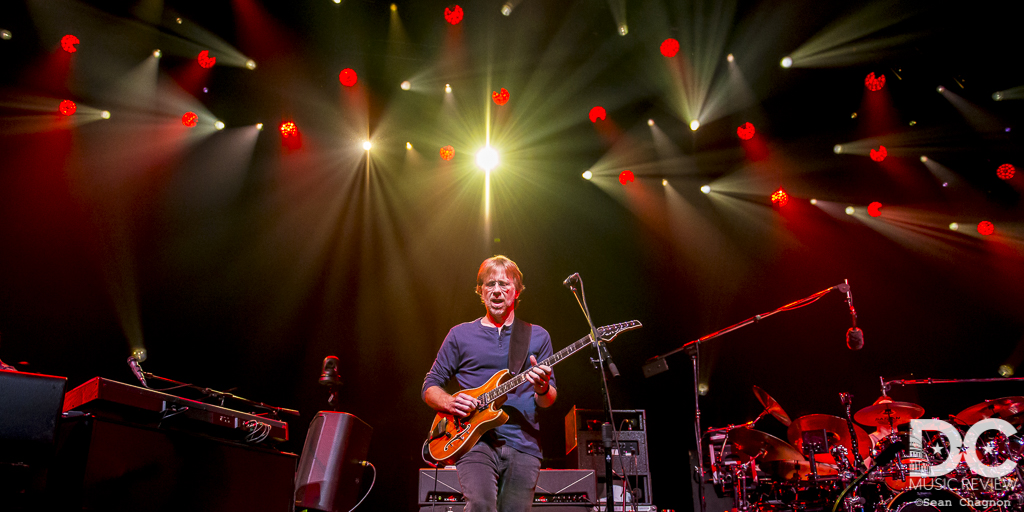 Hampton Coliseum has long been an important venue in Phish lore. The four-piece jam band from Vermont has played some of their most widely celebrated shows in the confines of the Tidewater region's intimate arena. Their history at the venue is the stuff of legend, with fans referring to it lovingly as "the Mothership." The band clearly feels strongly about Hampton Coliseum and has officially released several shows from the venue as live albums, including Hampton Comes Alive, recorded over two nights in 1998 and Hampton/Winston-Salem '97, featuring my personal favorite Phish show of all time, November 22, 1997, highlighted by an all-time great version of their song "Halley's Comet." Most notably though, the band chose the Mothership as the site for their long awaited reunion shows in 2009, kicking of the "3.0" era of Phish. The band last played the Mothership in 2013, opening their fall tour that year in Hampton's hallowed halls. So upon announcing three nights at the Coliseum this fall, Phans immediately booked up every hotel within 20 miles of the venue, from Virginia Beach to Newport News. Coming off their two-night tour opener in Albany, NY, the band was locked in for this run, clearly having spent a lot of time in the practice room preparing to execute this year's "musical costume," a Phish Halloween tradition that will be carried out next week in Las Vegas.

Arriving at the parking lot on Friday for the first night of the run, it was instantly clear why the band loves playing this venue. Unlike the major cities where Phish will play extended gigs, Hampton is a tour stop that only draws the die-hard fans, not casual observers looking for an exciting destination to see a show. I arrived at Shakedown - the area of the lot where vendors will set up to sell unofficial merchandise, "heady grilled cheese" sandwiches, art and more - and could sense that I was among my tribe: fans of this weird, oft-mocked band and its incredible, genre-defying music. We descended on this small town near the Virginia coast to experience something communal and transcendent; to be bound together by the power of music and the symbiotic energy between a band and its fans. There isn't a band on earth that is able to harness the energy of its crowd the way Phish can, and over these three nights at Hampton Coliseum, the 13,000 Phans in attendance were treated to a raucous and relentless party from the opening notes of "Strawberry Letter 23" on Friday to the closing vocal jam of "You Enjoy Myself" on Sunday. Each of those songs represented uniquely exciting moments during the run, with the former being a bust out of a cover debuted as part of the band's 13-show residency at Madison Square Garden known as the Baker's Dozen, and the latter being performed as a second encore on Sunday night, the first two-encore performance for the band since 2003.

But magical moments were found everywhere in between those two bookends. On Friday night, the band nearly brought down the house at the close of their first set with a rocking rendition of Joe Walsh's "Walk Away" that worked the crowd into an absolute frenzy. Of the three nights of the run, Friday was, in my mind, as close to a perfect Phish show as one can get. The second set included an extended, exploratory performance of "Golden Age." This TV on the Radio tune has become a staple of the Phish repertoire in 3.0, and this was among the best jams to come out of the song. After closing the show with a dark, psychedelic version of "Split Open and Melt," the band sent the crowd home with an encore performance of my personal favorite Phish song, "the Lizards." Night two kicked off with the band's relatively new arrangement of "Llama," one of their earliest songs released on the 1992 album A Picture of Nectar. The down-tempo, funky rendition, affectionately known as "Slow Llama," was a treat for fans in attendance, most of whom had never seen this version that had only previously been performed twice, in 2015 and 2016. This set also featured stand-out versions of "Runaway Jim" and "46 Days" before closing with the fan-favorite "Fluffhead." The set-closing "Fluffhead" felt like a celebratory moment, as the band and fans reflected on how far the Vermont quartet has come since opening their reunion shows with the prog-rock odyssey nearly ten years ago. After the brief intermission, Phish opened the second set with "First Tube," igniting the crowd in a way I have not seen since the fall of 2009. The excitement was palpable and then erupted like a volcano as guitarist Trey Anastasio played the opening riff of "Tweezer." The second set continued, feeling at several points like it was about to end, but didn't wrap up until nearly 11:25. After finishing the Rolling Stones' "Shine a Light," it seemed the band would bring the house down with "Tweezer Reprise," but they had already passed curfew and fans would have to hope for that release come Sunday. There is a saying in the Phish community that you should never miss a Sunday show, and there was plenty to love on the final night of the run. The band brought back the Little Feat classic "Skin it Back" after a gap of 113 shows and played perhaps the best jam of the weekend in the first set "Simple." Following a second set highlighted by a gorgeous rendition of "Waves," the band played "More" as their encore. Surely, we all thought, this would segue into the "Tweezer Reprise" we were all dying to hear, but the band took a bow and walked off the stage. Still, the crowd's endless cheering was enough to bring them back on stage to perform "You Enjoy Myself," the seminal Phish song, busting through the curfew once again before the band took their final bow for the weekend.

As special as the shows were, the Mothership experience is a magnificent one unto itself. Phans organized events at breweries, disc golf tournaments, and more to occupy their time before hitting the lot and heading into the show. I'd run into friends constantly walking around Shakedown, and made tons of new ones over the weekend. Hampton Coliseum is small, intimate, and 100% GA, so you can move freely inside, but no one was ever territorial or unkind. There was always tons of room to dance, and we all took full advantage of that freedom. The community was bound together for three glorious days of escape through the power of music, improvisation, and shared experience. To put it simply, it was the kind of weekend that only Phish can provide. The following videos are provides courtesy of Phish's YouTube Channel.

Click here to see the setlist for Phish's performance at Hampton Coliseum on October 19, 2018

5. Mountains in the Mist

Click here to see the setlist for Phish's performance at Hampton Coliseum on October 20, 2018

4. Backwards Down the Number Line >

[1] Performed in a slow funk style

Click here to see the setlist for Phish's performance at Hampton Coliseum on October 21, 2018

1. Stealing Time From the Faulty Plan

1. First Skin It Back since August, 11, 2015 -Philadelphia, PA; contains elements of Tweezer Reprise

Soundcheck night one at Hampton Coliseum.